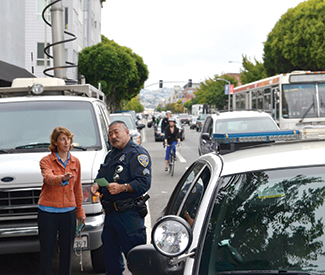 A memorial and informational event on Aug. 21 at the Sixth and Folsom corner where a bicyclist was fatally run over by a delivery truck a week earlier was marred by a tense and unsettling confrontation with an SFPD sergeant who showed up to block the bike lane with his cruiser, lecture the cyclists, and blame the victim.

The event was organized by the San Francisco Bicycle Coalition to raise awareness of the incident and that dangerous intersection and to call for the city to make improvements. It included friends and co-workers of 24-year-old Amelie Le Moullac, who was riding in the Folsom Street bike lane on the morning of Aug. 14 when an unidentified truck driver turned right onto Sixth Street, across her path, and ran her over.

SFPD Sgt. Dennis Toomer tells the Guardian that the department has completed the traffic incident report, information from which can only be shared with the parties involved, but that the investigation of the fatality is still ongoing and will be forwarded to the District Attorney’s Office for review once it’s done.

But SFBC Executive Director Leah Shahum said that SFPD Sgt. Richard Ernst, who showed up at the event a little before 9am, had already drawn his own conclusions about the crash and showed up to make his apparent disdain for “you people,” bicyclists, disturbingly clear.

Shahum said that she tried to be diplomatic with Ernst and asked him to please move his patrol car out of the bike lane and into an available parking space that was right next to it, saying that it presented an unnecessary hazard to bicyclists riding past.

But she said Ernst refused to do so for almost 10 minutes, telling the group that he has “a right” to leave his car there and that he was “making the point that bicyclists need to move around” cars parked in bike lanes, according to Shahum’s written account, which she prepared to file about the incident with the Office of Citizens Complaints.

“He then told me explicitly that he ‘would not leave until’ I ‘understood’ that ‘it was the bicyclist’s fault.’ This was shocking to hear, as I was told just a day ago by Commander [Mikail] Ali that the case was still under investigation and no cause had yet been determined,” Shahum wrote.

And apparently Ernst didn’t stop at denouncing Le Moullac for causing her own death, in front of people who are still mourning that death. Shahum said Ernst also blamed the other two bicyclist deaths in SF this year on the cyclists, and on “you people” in the SFBC for not teaching cyclists how to avoid cars.

“I told him the SF Bicycle Coalition does a significant amount of safety work educating people biking and driving about sharing the road, and that I’d be happy to share more information with him. I again urged him to move his car out of the bike lane. He again refused, saying it was his right and he wasn’t moving until I ‘understood,'” Shahum wrote.

Shahum said there were multiple witnesses to the incident, including three television reporters who were there to cover the event.

“In addition to the Sgt’s inappropriate and dangerous behavior of parking his car in the bike lane and blocking safe passage for people bicycling by, it was deeply upsetting to see him unnecessarily disrupt and add tension to what was already an emotional and difficult time for many people who lamented this sad loss of life,” Shahum wrote.

Asked about the actions and attitudes expressed by Ernst, who we could not reach for comment, Toomer told us he “cannot talk about personnel issues.”

Compounding Ernst’s insensitive and judgmental approach, it also appears the SFPD may have failed to properly investigate this incident, which Shahum and the SFBC have been tracking closely, and she said the SFPD told her that there were no video surveillance tapes of the collision.

After the event, SFBC’s Marc Caswell decided to check in at businesses on the block to see if they had any video cameras aimed at the intersection, and he found an auto body business at the intersection whose workers said they did indeed have revealing footage of the crash that the SFPD hasn’t requested, but which SFBC delivered to investigators.

“He had the time to come harass us at a memorial, but he didn’t have the time to see if anyone had footage of this incident,” Shahum told us. “It’s very unsettling.”