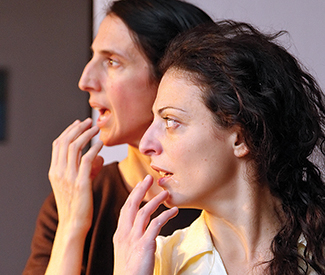 FALL ARTS Kings and queens, Brits and brats, music and mayhem, puppets and oppressors—the stage brims with them this fall. Talk about holding a mirror up to nature.

The King of Hearts is Off Again  Here’s a rare chance to experience the thrilling precision and stagecraft of a Polish ensemble theater working in the tradition of legendary master Jerzy Grotowski. San Francisco International Arts Festival and Los Angeles–based KulturePlus Productions present the Bay Area debut of Warsaw’s Studium Theatralne and its stage adaptation of Hanna Krall’s internationally acclaimed novel about a young Jewish woman (the real-life Izolda Regenberg) who escaped the Warsaw Ghetto and the Holocaust by passing as an Aryan. Oct. 2–4, Joe Goode Annex, SF; Oct. 5, University Theater, CSU East Bay, Hayward; www.sfiaf.org.

Forest Fringe SF On the heels of a galvanizing summer intensive with local and UK artists, the love affair between the south of England’s adventurous University of Chichester theater department and the Bay Area continues this fall with an international mini-festival of devised performance co-sponsored by CounterPULSE and featuring the likes of Action Hero and other UK artists, as well as more UK–Bay Area collaborations. Oct. 24–27, CounterPULSE, SF; www.counterpulse.org.

Dogugaeshi  Master puppeteer Basil Twist delves into the titular ancient Japanese theatrical technique in this play whose central staging conceit is an ever-shifting array of screens. Taking the audience on a journey through inner and outer landscapes, with Japanese composer-musician Yumiko Tanaka accompanying live on the three-stringed samisen, the hourlong Bessie Award–winning 2004 production becomes a meditation on the flux and fragility of tradition, life — the world — told with grace, subtlety, and humor. Nov. 6–10, Zellerbach Playhouse, Berk; calperfs.berkeley.edu.

San Francisco Fringe Festival With 36 companies and 158 performances over 16 days — and a per-show ticket price of about 10 bucks or less — the SF Fringe is as cheap and plump and addictive as a ballpark frank, and far easier on your colon. Sept. 6–21, EXIT Theatreplex, SF; www.sffringe.org.

Caught The group show “Fuck Off 2,” under way at Groninger Museum in the Netherlands, updates and celebrates a notorious (and officially quashed) 2000 exhibition in Beijing, which heralded the arrival of an uncompromising generation of Chinese contemporary artists, including Ai Weiwei (a contributing artist to the 2000 show and a co-curator of part two). Against the urgent and fascinating backdrop of art and political dissent in contemporary China comes 2by4 Theatre’s world premiere of Caught, a play on the art of subterfuge, or the subterfuge of art, by rising local playwright Christopher Chen (The Hundred Flowers Project) that centers on a major retrospective of work by “legendary” Chinese artist and dissident Lin Bo. Nov. 26–Dec. 21, ACT Costume Shop, SF; www.2by4theatre.com.

Mephistopheles Meph-heads: Your Faustian fix awaits in one of the biggest spectacles to “grace” the stage at the San Francisco Opera this season or any: Arrigo Boito’s 19th century adaptation of Goethe’s Faust, with bass-baritone Ildar Abdrazakov in the delightfully malign title role and SF Opera’s Nicola Luisotti on the podium. Sept. 6–Oct. 2, War Memorial Opera House, SF; www.sfopera.com.

The Episodes Brontez Purnell Dance Company delivers the next iteration of the intriguing and intelligent work that debuted last March at the Garage, which draws its physical and thematic inspiration from the ritual-like repetitions of the quotidian. Nov. 22–24, CounterPULSE, SF; www.counterpulse.org.

Keith Hennessy, Hana Lee Erdman, Jassem Hindi Among the many things one could say about the tantalizing lineup behind this three-act liquidizer of music, noise, improvisation, and performance, is that the evening reunites three impressive performer-agents from Hennessy’s monumental Turbulence (a dance about the economy). Dec. 6–7, CounterPULSE, SF; www.counterpulse.org. *