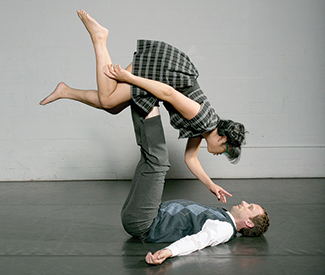 FALL ARTS Fall may no long bring with it the nervous anticipation of entering a new classroom, clutching a shiny lunch box to your chest. But for those of us hooked on live performance, September brings its own thrills, as theaters, studios, and lofts reopen their doors. If dance happens to be your particular bag, you can’t do much better than the here and now. Few other places in the country can beat the Bay Area for the sheer variety with which nude, slippered, and high-heeled feet take the stage.

EmSpace Dance‘s Erin Mei-Ling Stuart ranges far and wide for her new Monkey Gone to Heaven, exploring the role of prayer, meditation, and belief systems in primates of both the higher and the lower order. Sept. 12-15 and 19-22, CounterPULSE, SF; www.counterpulse.org.

For their new, multi-disciplinary MU — based on a Japanese legend about a young man who meets a mermaid and visits a lost continent at the bottom of the sea — First Voice art and life partners Brenda Wong Aoki and Mark Izu team up with ODC choreographer Kimi Okada. Young Kai Kane Aoki Izu portrays the traveler. Sept. 27-29, Jewish Community Center of San Francisco, SF; www.jccsf.org.

13th Floor Dance Theater‘s Jenny McAllister must have a thing for writers. She follows last year’s witty take on the Bloomsbury crowd with Being Raymond Chandler, in which she channels the quintessential mystery icon as he’s haunted by his fictional characters. Oct. 26-27 and Nov. 1-2, ODC Theater, SF; www.13thfloordance.org.

In the Netherlands the baton has been passed. It remains to be seen whether the long-time choreographic team — a rarity in itself — of Sol León and Paul Lightfoot can keep up the standards of the always superb Nederlands Dans Theater. Oct. 23-24, Zellerbach Hall, Berk; www.calperfs.berkeley.edu.

Joe Goode is poet, a soothsayer, and a clown who addresses a loneliness that goes to the core of who we are. His particular perspective comes from being a gay man, but his reach is broad and generous. Perhaps most important is his ability to continue finding intriguing new frameworks for his musings. The new Hush is based on six real-life stories. Sept. 26-Oct. 5, Z Space, SF; www.joegoode.org.

A rarity in contemporary dance, Los Angeles’ BodyTraffic is not a single-choreographer company, but focuses its efforts on creating a rep from the most exciting new voices it can find. For SF it will be Kyle Abraham, Barak Marshall, and Richard Siegal — hip-hop, dance theater, and jazz. Sept. 26-29, ODC Theater, SF; odcdance.org/bodytraffic.

At 20, Smuin Ballet has begun to make major inroads into drawing audiences with a repertoire that pushes the boundaries of ballet without disowning late founder Michael Smuin’s heritage. Czech choreographer Jirí Kylián’s Return to a Strange Land is a case in point. Oct. 4-12, Palace of Fine Arts, SF; www.smuinballet.org.

To honor Bill T. Jones/Arnie Zane Dance Company‘s three decades of rethinking dance, Yerba Buena Center for the Arts has scheduled exhibits, conversations, master classes, video screenings, a site-specific piece at CounterPULSE (Oct. 10), and a rethinking of a classic. In A Rite Jones works with theater pioneer Anne Bogart for a fresh take on Stravinsky’s masterwork The Rite of Spring. Oct. 7-13, YBCA and CounterPULSE, SF; www.ybca.org.

For its 40th anniversary, Oakland-based Dimensions Dance Theater makes a rare appearance in SF. At this year’s SF Ethnic Dance Festival, the company just about tore the roof off YBCA with its explosively joyous take on a New Orleans funeral. The anniversary program offers glimpses into past — going back to 1973 — and the world premiere of Rhythms of Life Down the Congo Line. Oct. 5, YBCA, SF; www.dimensionsdance.org.

Flamenco’s La Tania and ODC/Dance (with Waving Not Drowning: A Guide to Elegance, featuring paper dresses) are among the participants in Cal Performances’ annual hit show, Fall Free for All, an all-day open house of live performances on the UC Berkeley campus. Sept. 29, UC Berkeley, Berk; calperfs.berkeley.edu.

Janice Garrett and Charles Moulton of Garrett + Moulton Productions seem to inspire each other in pursuing the unknown with a common language. A Show of Hands is their latest endeavor — daytime performances exploring gestures with the help of Dan Becker’s commissioned score, performed live by the Friction Quartet. Oct. 17-26, Jewish Community Center of San Francisco, SF; www.garrettmoulton.org.