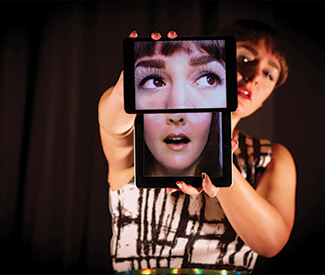 THEATER For fans of experimental performance, there’s nothing quite like the San Francisco Fringe Festival. Now a venerable 22 years old, the Fringe still retains its freewheeling nature, where anything goes and expecting the unexpected is the best approach. It’s also served as a vital incubator for many now-established theater companies — including Cutting Ball, Crowded Fire, Mugwumpin, and Thrillpeddlers — and no other festival prepares theater artists for the business realities of self-producing quite like the Fringe. The fest makes them responsible for every detail of their show’s success, including play creation, technical design, transportation, and audience outreach.

Hosted at the EXIT Theatre, which holds down the edge of the downtown theater district, the SF Fringe is the final stop on the annual Canadian Association of Fringe Festivals circuit (which stretches east to west across the North American continent). Over the years, it has welcomed artists from as nearby as the Mission District and as far away as Mauritius, drawing their names (literally) out of a hat during a public lottery to ensure that all applicants get an equal shot at participating.

This commitment to non-curation is what sets the Fringe apart from other theater festivals, as even the organizers don’t know what to expect from a given show until the curtain goes up. With that caveat in mind, here’s a sampling of shows that look promising for one reason or another — though your best bet, as always, is to see as many shows as possible and discover what stands out for you.

Solo shows are a Fringe staple, since technical considerations are skewed in favor of minimalist productions. With Held offers a glimpse inside the mind and method of a local artist, John Held Jr.; playwright-performer Jeremy Greco (of The Thrilling Adventures of Elvis in Space infamy) spent over a year interviewing Held about his life, and another year creating a show out of the material. Rebecca M. Fisher (2007’s The Magnificence of the Disaster) takes her audiences down south with Memphis on My Mind, while local comedian and circus school alumna Jill Vice brings them to the bar to pour everyone a (metaphorical) round in The Tipped & the Tipsy. Triple threat musician, actor, and improv artist Jeff England promises to combine all of his talents in his solo offering Tale Me Another, while another triple threat (singer-dancer-actor) Movin’ Melvin Brown brings his well-traveled performance piece A Man, A Magic, A Music to SF for the first time.

Shows which topically involve sex are another time-honored Fringe tradition, and this year’s selection seems especially wide-ranging. There’s 52 Letters, by Regina Y. Evans, which delves into the tricky territory of sex-trafficking with a performance poetry format; and The Women of Tu-Na House, a solo show by Nancy Eng, who portrays eight women working the “massage parlor” circuit.

One sexy show that breaks into the territory of the fantastical is Fish-girl, co-created and performed by Siouxsie Q, creator of the popular sex worker podcast and blog the WhoreCast. A mermaid grapples with “the feeling of being half in one world and half in another,” a common sentiment among sex workers, many of whom also “identify strongly with the mermaid myth,” according to Q.

For lovers of the purely experimental there are always a few Fringe shows that are best categorized as impossible-to-categorize, and it’s often these shows that best encapsulate the spirit of what’s possible, theatrically, in and out of the Festival. This year these include the welcome return of Popcorn Anti-Theater’s traveling bus with a whole new lineup of performers (including clowns, comediennes, and shadow puppeteers) and new secret locations on their mysterious itinerary.

Fringe stalwarts Dark Porch Theatre return with what sounds like one of their most ambitious projects to date, StormStressLenz, a fractured remix of the works of J. M. R. Lenz, an 18th century German playwright of the little-referenced sturm und drang movement. Remounted in 30 small vignettes connected to one of six themes — love, tricks, conflict, sorrow, resolution, and reunion — the piece is said to be structured like a concert of chamber music, with director-translator Martin Schwartz as conductor. Davis Shakespeare Ensemble’s Nightingale is a work of devised theater combining medieval and modern text, movement, shadow puppetry, and beat boxing; while performance artist Cara Rose DeFabio brings a follow-up to her 2012 multimedia piece She Was a Computer with After the Tone, a reflection on death, immortality, and technology with an audience participation component (hint: keep your cellphone on).

“This is my first Fringe, and I couldn’t be more excited,” DeFabio confides enthusiastically. “While at times it feels overwhelming, that abundance of choice and excitement is exactly what buoys the whole festival.” *