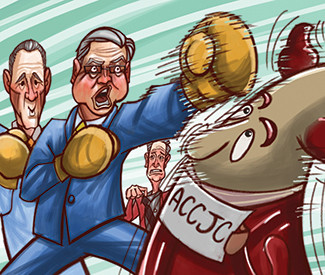 Three distinct players with three distinct strategies for saving City College of San Francisco showed their hands last week, all centered around the Accrediting Commission of Community and Junior Colleges, which plans to revoke City College’s accreditation in less than a year.

City Attorney Dennis Herrera filed a lawsuit against the ACCJC, state lawmakers are revving up to investigate it, and City College Super Trustee Bob Agrella is doing his best to quietly meet the accreditor’s standards.

Whether any of the approaches will save the school is anyone’s guess, but one thing’s for sure: In the process of saving City College, its accreditation agency has gone from an unknown bureaucracy to a polarizing political punching bag.

Herrera threw a right hook at the ACCJC on Aug. 22, announcing his lawsuit to stop them from closing City College. It offers a scathing critique of the accreditation agency and those whose agenda it is pushing.

The ACCJC said City College failed to meet certain standards by its deadline last July, leading the agency to order its closure in exactly one year. Since then, enrollment at the college of 85,000 students plummeted and the school is fighting for its very existence. Now Herrera is saying that closure action was improper, unwarranted, and out of line with the agency’s prior actions.

Herrera’s suit alleges the ACCJC unlawfully allowed its advocacy and political bias to prejudice its evaluation of college accreditation standards. “It is a matter of public record that the ACCJC has been an advocate to reshape the mission of California community colleges,” Herrera said at a press conference.

The agenda he said it was advocating for is the completion agenda, which was the focus of our July 9 cover story, “Who Killed City College?” Essentially, it’s the move to force community colleges to focus on only two-year transfer students at the expense of so-called “non-credit” classes, which can be lifelong learning skills or English as Second Language classes.

“There’s a reason judges aren’t advocates and advocates aren’t judges,” Herrera said. “We should have a problem when an entity charged with evaluation engages in political advocacy.”

City College avoided those reform efforts from the state for years, and Herrera alleges that the ACCJC tried to sanction City College because of that resistance.

ACCJC President Barbara Beno was not available for comment. In a statement, the agency said it was surprised to learn Herrera filed a suit against the ACCJC, and that the suit appears to be “without merit” and an attempt to “politicize and interfere with the ongoing accreditation review process.”

Herrera may be playing cowboy, guns aimed right at the ACCJC, but he also said he doesn’t want the agency to close, just to clean up its act and be accountable. But on the other side of the OK Corral, an investigation by the California Legislature is under way — and it may be sizing up a coffin for the ACCJC.

Just a day before Herrera announced his lawsuit, the California Joint Legislative Audit Committee voted to investigate the accrediting commission. The audit committee is a legislative fact-finding body usually staffed by former investigative journalists, and the senators who asked for the hearing were out for the ACCJC’s blood.

“The stakes are high and the commission’s power is absolute,” Sen. Jim Beall, D-San Jose, told the audit committee. He then outlined the danger of losing community colleges that faced closure at the hand of the ACCJC.

Sen. Jim Nielsen, R-Gerber, was much more direct. “Sen. Beall and I met with (ACCJC) President Barbara Beno in my office,” he said. “In all my career, in my thousands of meetings with agency individuals, representatives, secretaries, etcetera, I have never met with such an arrogant, condescending individual in her response to Sen. Beall and I. That attitude reflected in such a senior person raised huge red flags for me.”

In public comment, Assemblymember Tom Ammiano, D-SF, noted that recently the U.S. Department of Education upheld the California Federation of Teachers’ complaints that the ACCJC process “is guilty of no transparency, little accountability, and conflict of interest.”

Then it was the ACCJC’s turn to defend itself. Beno was unable to attend, but ACCJC Vice President Krista Johns and Commissioner Frank Gornick were there instead.

Gornick defended the accrediting commission, saying it was “rigorously” evaluated every six years. Ultimately, the committee voted 10-1 to investigate a number of mysteries regarding the ACCJC: how it stacks up to the five other accrediting bodies nationwide, determining the ACCJC’s compliance with open meeting laws (it denied public access to a recent “public meeting,” also barring a San Francisco Chronicle reporter), and an evaluation of the fairness in how the agency issues sanctions.

Amid the state and city level battles over City College, one key player prefers to work quietly. Super Trustee Bob Agrella, tasked by the state to take over the power of City College’s Board of Trustees and save the college, feels his hands are tied.

“My job is to play within the rules and regulations of the ACCJC,” Agrella told the Guardian. Sitting in his office at City College’s Ocean Campus, he pointed out that the accreditation agency actually has a rule that says colleges have to be on amicable terms with the ACCJC — or else.

“One of the eligibility requirements is the college maintains good relationship with the commission,” Agrella said. Notably, if City College fails to meet its requirements, it won’t be able to keep its accreditation in its evaluation next July.

So while Herrera and JLAC can blast the ACCJC, Agrella feels like he needs to remain neutral or he could blow City College’s chances at staying open.

If he were to try battling the commission on its rules, Agrella told us, he would do it within the framework of the ACCJC’s own policies. But it’s exactly those policies that Herrera said the ACCJC is violating.

The lawsuit from Herrera’s office alleges, among other things, that the evaluating team that ACCJC sent to review City College was stacked with the school’s political enemies from a body called the California Community College Student Success Task Force, which City College loudly and publicly opposed (full disclosure: as a former City College student, I spoke against the Task Force at a hearing in January 2012, and that public testimony is cited in Herrera’s lawsuit).

The ACCJC’s president, Beno, wrote multiple letters to state agencies in support of the Task Force’s recommendations, the suit alleges. This action contradicts the ACCJC’s conflict of interest policy, according to the suit, which defines a conflict as including “any personal or professional connections that would create either a conflict or the appearance of conflict of interest.”

So if the ACCJC won’t play by the rules, shouldn’t Agrella support the actions of Herrera and JLAC to resist the ACCJC’s decree?

“In fairness to the people taking these actions, they feel time is of the essence,” Agrella said. “I just happen to, respectfully, disagree with it, because my job is not to push the (ACCJC). My job is to try to retain accreditation.”

But it’s becoming increasingly clear that the ACCJC may not be the only body that will decide the fate of City College.