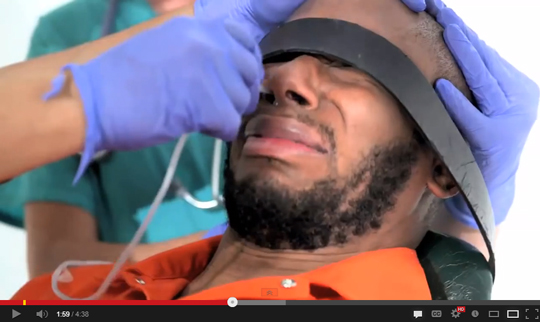 The practice of force-feeding inmates has a branding problem.

The issue first came to light after a U.S. District Judge last week granted the California Department of Rehabilitation and Corrections, or CDRC, the ability to feed inmates who are hunger striking even if they signed “Do Not Resuscitate” waivers, commonly known as DNR’s. The order called any DNR granted during the beginning of the hunger strike 50 days ago as invalid.

As the negotiations wind on, it’s looking more inevitable that the hunger strike holdouts will soon be near death. But when the prisons start force-feeding inmates, a whole new problem will arise: image.

The CDRC have given all the concessions they’re willing to give, they said, and if an inmate dies while fasting they’d become a martyr. At some point, the prisons may have to feed the inmates via liquid in an IV, or even via tubes.

The tubes are inserted through the nose and directly into their stomachs, and conjure images of alleged terrorists at Guantanamo Bay.

In a video made by musician Mos Def, aka Yasiin Bey, Bey allowed himself to be force fed to bring attention to Guantanamo’s detainees. Bey is strapped to a chair, and a clear plastic tube is inserted through his nose as he screams, writhes, and begs for it to stop.

“The tube went in and the first part of it is not that bad, but then you get this burning,” he said in the video. “It starts to be like really unbearable, like something is reaching into the back of my brain…. I really couldn’t take it.”

For Mos Def, the feeding was brief. For inmates, the process can take two hours.

To address that issue the California Department of Corrections and Rehabilitation (CDCR) has taken to calling force feeding “refeeding,” which is term that already has a definition: feeding someone who has recently ended a fast. It has medical significance because a whole host of ailments can occur when someone who is ending a fast is fed the wrong foods, or fed too quickly. They can even die.

But now the CDCR has used the word “refeeding” to mean feeding inmates who have already signed DNRs and are fed to prevent death. The word was in every major news report on the court’s recent decision, from Democracy Now to Al Jazeera.

“Refeeding” is the new force-feeding.

Joyce Hayhoe, legislative director of California Correctional Health Care Services, wanted to make it clear that no one has been force-fed yet, and that refeeding was not force feeding.

“What I would like to say is we’re not force-feeding anybody,” she told the Guardian. “When doctors do not have a valid DNR, in the absence of any other information, when we have an inmate we cannot communicate with, we’re going to save their lives.”

But the sticking point in her statement is the word “valid,” advocates say. What is a valid DNR? The health care providers allege that some inmates began the hunger strike because of intimidation by senior gang members in the jails. Hayhoe said one inmate hid food so his fellow hunger strikers would not know, and that “implied something” to her.

There were 12,000 inmates who started the hunger strike on July 8, according to counts by the prisons themselves. Of those, it’s entirely conceivable that a few were coerced, said Dr. Ronald Ahnen, a politics professor at Saint Mary’s College focusing on prison reform.

“Is it possible some prisoners were coerced,” due to the sheer number of inmates involved, he said in an interview. But, “if you read the call from the hunger strike forward, and you heard from the reps in Pelican Bay (Prison), they have always stated emphatically and clearly that the hunger strike is voluntary. They have said no one should continue with the hunger strike longer than they were willing or able to do.”

Now the number of inmates in the hunger strike is down to 92, according to the CDRC. Of those, 41 have been on a hunger strike continuously since it began on July 8.

Hayhoe said there are only a handful of strikers with DNRs left, but would not reveal specific numbers.

Ahnen, who is affiliated with the hunger strikers as a reform advocate but did not speak as their spokesperson, said that though those numbers have dwindled, they’re still significant.

“What amazes me is, 41 people who have been without food for 50 days. I think the major media is missing the importance of that,” he said. “When you think of the Irish hunger strike that we all think of from 1980, that’s 23 individuals who all died. We now have 42, risking their lives to have humane conditions in their confinement. Its very, very historic.”

Lost in the debate over food are the actual reasons for striking. The inmates have five core issues which you can see at their website here, but mostly they revolve around quality of life in Segregated Housing Units, commonly referred to as the SHU. The prisoners say it is solitary confinement, and they can be thrown in there easily by being told they have affiliations with gangs.

“I’ve had prisoners tell me their investigators say they can use any evidence and implicate anyone (as a gang member),” Ahnen said.

And the inmates have little recourse once they’ve been labeled a gang member and thrown in the SHU. Toshio Meronek covered this for Bay Guardian last month (“Hungry for Reform,” 7/3/13), saying it would take nearly 20 years to conduct reviews of the over 10,000 inmates presently held in solitary confinement in California.

In a statement circulated shortly after the CDCR’s on Thursday, State Senator Mark Leno wrote, “I have concerns that this review process is moving too slowly and I would like to see it accelerated.”

The hunger strike is one of the inmate’s last tools to reform that system. Now, in a cell that strips away most all human freedoms, “refeeding” may take away an inmate’s choice to die.

The federal judge’s decision to strip away that right reverberated across the world. The United Nations Special Rapporteur on torture, Juan E. Méndez, issued a statement saying “it is not acceptable to use threats of forced feeding or other types of physical or psychological coercion against individuals who have opted for the extreme recourse of a hunger strike.”

Hayhoe, from the prison’s health services, said there is some wiggle room in having your request to not be resuscitated honored.

“If a person has signed a DNR during the hunger strike, the best thing they can do is start having discussions with his primary care physician and expressing their need,” she said. The inmates have been sustained on Gatorade and vitamins, she said, and are not yet at the point of needing resuscitation.

Ahnen also clarified that the violent method of force-feeding may not be used. Another way to do it, he said, is to feed patients through an IV should they lapse into unconsciousness.

“This is a more likely scenario,” he said, but it is still force-feeding. Hayhoe said she would contact a doctor to see when each method would be used, but did not have the information immediately available.

These inmates are close to dehydration, close to organ failure, and close to death for their principles, Ahnen said, and now their political stand won’t be honored. They’ll be force-fed, no matter what terminology is used to describe it.

“Make no mistake about it, if a prisoner is being fed against their will, this is force feeding,” he said.

And with the flip of a word, the inmates have lost their right to die.