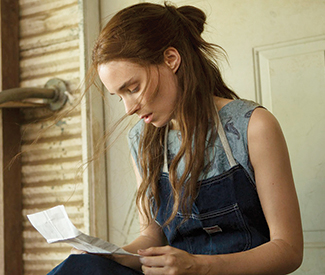 Between Saints’ fastidiously retro style and murder-ballad story (bank robber breaks out of jail to reunite with his sweetheart and their young daughter — only to find his romantic ideals clash with his doomed reality), one might suspect Lowery takes himself extremely seriously. Scroll through his Twitter feed, however, and you’ll spot this unpretentious zinger: “In exactly one month, our very gentle remake of Con Air will be opening in theaters nationwide.”

When I bring this up in a phone interview, Lowery unleashes a hearty guffaw. “I was shocked to realize that’s exactly what it is,” he jokes. “But ours is definitely more gentle. I’ll just leave it at that.”

Though Saints earned praise on the film-fest circuit for its craftsmanship, its big-name cast — Casey Affleck and Rooney Mara as the lonely, longing lovers; Keith Carradine as a shopkeeper with a dark past; Ben Foster as a cop who pines for Mara’s character — is likely what will pique mainstream interest. But will pre-release hype translate to a Beasts of the Southern Wild-style breakthrough? In the week before Saints‘ theatrical release, Lowery (whose best-known previous credit is probably editing Upstream Color) finds himself in a state of suspended anticipation.

“It’s very surreal,” he admits. “I’m pinching myself on a pretty regular basis. It feels like we just finished shooting the movie, and the fact that it’s about to be in theaters around the country is a very strange idea! I hope that when people go see it, regardless of what they are expecting to see, they’ll get onto the movie’s wavelength in a quick enough fashion and go along for the ride. It’s a very unique and singular movie that’s trying to do something very specific, and once you adjust to that I think it will be a very satisfying experience.”

Truth be told, Saints is not actually that unique — it will inspire déjà vu in anyone who’s seen 1973’s Badlands, for instance. A devout cinephile, Lowery openly acknowledges Saints’ debt to what came before. “I wanted to take a lot from other things. I wanted to make a movie that felt like it was participating in a tradition of storytelling, particularly in movies but even going back to folk songs and old history lessons,” he says. “I wanted to find a new approach to telling a classic story — so I wanted to use everything that other movies had already done as the platform from which I was going to tell my story.”

He continues. “In [Saints], you don’t see the bank robbery or the prison break, and that’s because we’ve seen those things happen before. We’ve seen the movie where the guy and the girl go on a crime spree, and I want to use the fact that people know that story already. It’s a benefit to this movie, to have [the knowledge of earlier movies] be the context in which Saints then moves forward on its own.”

Saints‘ storytelling keeps to a very deliberate pace, a quality owing to Lowery’s background as a film editor. “As an audience member, I enjoy getting the time and space to figure out things for myself,” he says. “Everything was very intentional, whether it’s a line of dialogue or a little detail hidden in the back of the screen. My job as a filmmaker is to create a context in which you are able to become alert to those details. Whenever you’re getting a movie that deprives you of certain expected beats, there’s an adjustment — but I think that everyone is [eventually] able to understand. It helps that we’re telling a very simple, traditional, old-fashioned story. And the way in which we tell it is hopefully where it becomes fresh and somewhat modern.”

Modern storytelling may be one thing, but Saints‘ dipped-in-amber, outlaw-chic mise-en-scène — 10-gallon hat tips to cinematographer Bradford Young, production designer Jade Healy, and composer Daniel Hart (whose score, bedecked with hand-claps and banjos, is practically a character in the film) — is overtly antique-y.

“I keep saying I wanted this movie to feel old. I wanted it to feel like it participated in a tradition that has existed for a long time,” Lowery explains. “To do that, I think you have to look to the past. Even by starting off the movie with ‘This was in Texas’ — it’s all in the past tense. Just having that sense of a time that has already passed is, I think, helpful to understanding the tone of the movie. It has an elegiac tone. We wanted the whole thing to feel like embers that are burning out.”

Saints takes place over four years, though we’re never told which years. Clearly, it’s a period piece — and not accidentally, its vaguely defined time frame hews to when the films that influenced it were released.

“We picked the 1970s because there were a lot of great ’70s movies,” Lowery explains. “Even on a subconscious level, if you have that association, it’s helpful in calibrating the audience’s expectations as to what type of movie this is going to be. But beyond that, all the wardrobe is pre-1970s. Everything Rooney [Mara] wears is from the 1940s and ’50s, and we really tried to blend time periods and move further back into the past from that. But that was our cutoff point, the 1970s. There’s no denying that any associations that we get from that are hopefully beneficial.” *