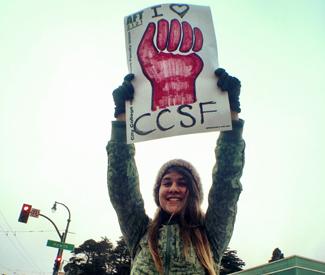 I have very low expectations from editorials in the San Francisco Chronicle, which generally share a worldview with the Chamber of Commerce and carry water for some powerful Establishment figure or another. But today’s editorial on City Attorney Dennis Herrera’s lawsuit defending City College is so bad and illogical that it reads like an Onion parody of a Chronicle editorial.

Clearly put up to it by some of the most reactionary figures in the Mayor’s Office, Chronicle Editorial Page Editor John Diaz or one his lackeys parrot the submissive stance that Mayor Ed Lee has taken toward outsiders with corporatist agenda that have seized control of City College and sought to make a high-profile example of it.

“The city’s leaders should be calling for tough love, not coddling dysfunction. Fortunately, Mayor Ed Lee has done just that – but, regrettably, the city attorney is going in the opposite direct [sic],” the Chronicle wrote.

And by “tough love,” they apparently mean obedient and unquestioning compliance with an obscure accrediting agency’s demand that City College slash community-based curriculum; close facilities relied on by both students and local nonprofit groups; rip up contracts with faculty and force instructors to live on part-time wages; distill course offerings down to just what serve corporations, universities, and banking interests; and other aspects of an educational agenda that hasn’t been properly vetted in public hearings or approved by any elected body.

Herrera is to be applauded for pointing out the overreach and conflicts-of-interest on the Accrediting Commission of Community and Junior Colleges, which were also recently criticized by the US Department of Education. And we’re excited to see what Herrera uncovers during the discovery process in his lawsuit against a secretive, corporate-connected, document-shredding agency that broke its own internal rules in its treatment of City College.

The Chronicle graciously refers to these unavoidable facts in a brief paragraph, writing that the ACCJC “is not without flaws. It’s secretive, and its internal policies drew a rebuke from the U.S. Department of Education after City College faculty filed complaints about its conduct.”

But then it dimisses that and shows a suspicious incuriosity about why the ACCJC is being so secretive and what its agenda might be, instead doubling down on criticizing City College in a way that is so over-the-top that this fine institution is unrecognizable to anyone who is actually familiar with it, which Diaz and company clearly aren’t.

“The needed changes include hiring a comptroller to organize financial controls, making sure students pay for classes, and overhauling a loose-fit governance system that puts faculty, students and staff in charge of operations with inadequate administrative controls. Lee has strongly endorsed an overhaul of City College’s ramshackle operations,” the Chronicle writes.

Unlike us here at the Guardian, where I’ve written two recent editorials in support of democracy and local control and critical of Lee and others who have been too quick to cooperate with the toppling of the locally elected Board of Trustees, the Chronicle apparently believe in more authoritarian methods of governance.

“The first repairs are now under way. The powers of the elected community college board are on hold, and a special trustee dispatched by state Community College Chancellor Brice Harris is in charge,” the Chronicle writes.

And as we report in our upcoming issue, that special trustee also has no interest in questioning the ACCJC’s process or methods or even allowing the public to review internal communications. It’s a shame that bootlickers like Lee and the Chronicle have sold out such an important local institution to their corporate masters, but luckily for San Francisco, Herrera, the California Federation of Teachers, the Guardian, other progressive media voices, and hundreds of our community partners aren’t giving up so easily, instead pushing for an open, truthful, democratic, and transparent discussion about City College’s mission and its future.