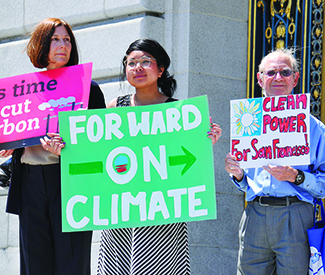 A plan for a municipal power program that would offer 100 percent green energy to San Francisco customers was stalled on Aug. 13, prompting Sup. John Avalos to explore what legal options might be available to bring the program to fruition without further delay.

Prior to that San Francisco Public Utilities Commission hearing, supporters of CleanPowerSF rallied on the steps of City Hall, urging Mayor Ed Lee and members of the commission to approve a not-to-exceed rate, a technical hurdle that must be cleared before the program can advance. SFPUC staff cannot formalize a contract for purchasing power on the open market until that maximum rate has been formally established, so as long as it goes unapproved, CleanPowerSF lingers in limbo.

“We call on the Mayor’s Office to stop impeding progress with heavy-handed politics,” said Shawn Marshall, executive director of Local Energy Aggregation Network (LEAN) — a group that assists with clean-energy municipal power programs. “And we ask the San Francisco Public Utilities Commission to stay focused on its job of implementing a program that was approved by the San Francisco Board of Supervisors last September. That’s almost a year ago, folks.”

But after more than two hours of public comment in which dozens of advocates voiced support for moving ahead with the program, SFPUC commissioners voted down a motion to approve the rate, leaving CleanPowerSF in limbo with no clear path forward.

Commissioners Francesca Vietor and Anson Moran were the only ones on the commission to favor the rate approval, while Ann Moller Caen, Vince Courtney, and President Art Torres shot it down.

“I feel like today is a historic moment for the SFPUC as well as the city of San Francisco,” Vietor said as she introduced the motion at the beginning of the meeting, “to become a leader in combating climate change.”

Rather than focus on the question of whether or not to establish a top rate of 11.5 cents per kilowatt-hour (a reduced price from an earlier proposal that sparked an outcry from critics because of the sticker shock), Torres and Caen criticized CleanPowerSF before casting “no” votes.

Caen said she’d “always had problems with the opt-out situation,” referring to a system that will automatically enroll utility customers into the program, while Torres criticized the project for changing shape since its inception, saying, “at the end of the day, this is not what San Franciscans had anticipated.”

But after straying well beyond the scope of a discussion about the not-to-exceed rate, commissioners who shot down CleanPowerSF didn’t provide SFPUC staff with any hints on how to allay their concerns. Some might interpret the hearing outcome as a death knell for CleanPowerSF, but Avalos has taken up the cause of pushing for implementation.

Unable to attend the hearing in person, Avalos sent legislative aide Jeremy Pollock to convey his concerns. “We all understand the politics of the situation,” his statement noted. “The Board of Supervisors and every major environmental group in the City support this program. The Mayor, PG&E, and its union oppose it. I know you are feeling a lot of pressure from both sides. But we cannot afford further political gamesmanship to cause additional delays in an attempt to kill this program.”

The effort to implement CleanPowerSF is mired in politics. For Pacific Gas & Electric Co., Northern California’s largest utility, the enterprise represents an encroachment into prime service territory and a threat to the power company’s monopoly.

PG&E has long been highly influential at San Francisco City Hall. It has funded many political campaigns and curried favor with powerful figures (former San Francisco Mayor Willie Brown, known to be a frequent dining companion of the mayor, has been richly rewarded for his consulting services, for instance). Mayor Ed Lee opposes the program, and holds the authority to appoint commissioners to the SFPUC.

The City Charter gives the SFPUC the responsibility of establishing fair and sufficient rates for the city’s utility operations. But Avalos charged that “any further delay will essentially show that we are in a constitutional crisis caused by a city department failing to carry out a policy approved by a veto-proof supermajority of the Board of Supervisors.”

The supervisor added that if the rate failed to win approval at the hearing, he would call upon the City Attorney to explore legal options “to resolve this type of stalemate—including the possibility of drafting a Charter Amendment. CleanPowerSF is too important and the threat of climate change is too significant to allow this program to die on the vine. It is time for leadership.”

Meanwhile, activists who’ve attended countless meetings with SFPUC staff to move the program forward expressed frustration in the aftermath of the vote. “Things are in this holding pattern, and the dissenting commissioners did not provide a way forward,” noted Jed Holtzman, an advocate with climate group 350 Bay Area. “They just kind of said, ‘no.'”

The weekend before the hearing, mailers paid for by International Brotherhood of Electrical Workers Local 1245, a union representing PG&E employees, blanketed Noe Valley residences with fliers. Depicting seashells besmirched with oil, the mailers seized on the involvement of Shell Energy North America, an oil giant with a contract pending with the SFPUC to administer power purchases for the first four and a half years of the program.

Shell’s involvement presents something of a challenge for advocates, who have long advocated for a program that would be run entirely by the SFPUC with a centerpiece of renewable power generation facilities that could double as a source of local job creation.

Despite the drawbacks of a more watered down start to the program and the involvement of a notorious fossil fuel company, progressives and major environmental organizations strongly advocated for moving forward with the Shell contract to give the SFPUC a shot at positioning itself financially to float revenue bonds for build-outs of a local green energy infrastructure.

“The plan is to completely replace this with the build-out,” noted John Rizzo, who sits on the executive committee of the San Francisco Bay Chapter of the Sierra Club.

A 134-page report prepared by Local Power Inc. described in careful detail how the city could use wind, solar, geothermal, energy efficiency, and other measures for a viable program. While SFPUC representatives have indicated that some of those recommendations will still be implemented, the agency is no longer working with Local Power.

“Our draft model was 1,500 jobs per year,” Paul Fenn, founder and president of Local Power, wrote in an email to the Guardian. “But earlier runs show as many as twice that many jobs, and we projected the higher end for the final model.” In the end, though, “SFPUC declined to continue with completion of this work, so we are in limbo — apparently an organization without allies,” Fenn added. Asked about this, Kim Malcom, the SFPUC’s director of CleanPowerSF, told the Guardian that Fenn’s analysis was based on the assumption that the agency would issue bonds totaling $1 billion. “We have no confidence that we could issue a billion dollars worth of bonds in the first few years of the program,” she said, noting that the highest the agency expected to go was closer to $200 million. And at this point, it remains to be seen whether CleanPowerSF will move ahead at all. “One of the difficulties we face is that we can’t move forward without a rate,” SFPUC spokesperson Charles Sheehan noted. “In terms of launching and implementing, we can’t do that until we have a rate structure,” and now that the utility board has blocked that from happening, there is no clear path forward. Still, activists who are serious about CleanPowerSF believe it’s key for positioning San Francisco as a leader in the fight against climate change. “CleanPowerSF is a crucial step for achieving California’s 2020 greenhouse gas goals,” Bill Reilly, chairman emeritus of the World Wildlife Fund and a former EPA administrator, wrote in a letter to Lee. “It’s also an essential model &ldots; as cities and communities are compelled to address the problems fueled by climate change.”