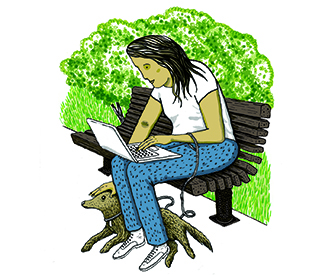 Eight years ago, San Francisco almost gave away an enormously lucrative public utility to Google and Earthlink: a citywide Wi-Fi connection. The hastily drawn up plan was championed by then-Mayor Gavin Newsom after a Google executive pitched him on the idea of citywide wireless Internet access at a dinner party.

Google’s Wi-Fi scheme would have blanketed the city with coverage, but it would also have required users to obtain Google accounts to sign in, thereby facilitating the company’s vacuum-like data harvesting practices that suck up everything from search queries and emails to the geographic locations of smartphones and tablets. Google’s Wi-Fi plan would have allowed the tech giant to insert “prioritized placement” of ads and brands into a Wi-Fi user’s feed, limiting choice of content through profit-driven algorithms.

The Electronic Frontier Foundation, ACLU of Northern California, Electronic Privacy Information Center, and we at the Bay Guardian all criticized the plan (see “Tech Disconnect,” 11/9/05). Earthlink, Google’s partner in the privatization deal, nearly went bankrupt in 2007 and the company bailed on the Wi-Fi proposal. That was the end of the city’s first Wi-Fi scheme. Thousands of free networks in cafes and hotels popped up in the meantime, leading many to question the purpose of building municipal Wi-Fi.

But municipal Wi-Fi is back. Sup. Mark Farrell and Mayor Ed Lee announced recently that free Wi-Fi is coming to 31 San Francisco parks. Google is involved yet again, but officials in the city’s Department of Technology say that the network will be not be controlled by Google, nor directly susceptible to privacy invasions by the “don’t be evil” company or its affiliates. In short, it will be a public utility.

“I think a lot of the prior debate around free Wi-Fi in San Francisco that never moved forward was because of different questions around business models,” Farrell told us. “To emphasize, this is a free gift [from Google] of financial benefit to the city of San Francisco with no strings attached.”

For the parks, Google has agreed to give a $600,000 contribution to fund Wi-Fi installation and two years of operation. Farrell said this is the company’s only role. There will be no Google hardware or software allowing the company to devour user data or steer traffic.

But thanks to the proliferation and technical advances of smartphones, cellular networks are now choking on megabits of traffic. Telecom companies see Wi-Fi as a means of offloading mobile traffic onto broadband infrastructure. Google and other companies see Wi-Fi networks as vast troves of consumer data, and airwaves on which to advertise.

Google’s grant for Wi-Fi in San Francisco’s parks comes after months of bad press for the company and the tech sector, including revelations that all of Silicon Valley’s top companies readily cooperated with the NSA’s electronic surveillance programs.

Google also recently paid out $7 million to settle state investigations into its “Wi-Spy” data collection activities: wireless receivers hidden in Google’s Street View vehicles sopped up communications data, including passwords and even email content, from millions of networks in the United States and Europe. Beside Google’s numerous spying scandals, the company has also come under criticism for aggressively avoiding federal taxes, and locally for its impact on San Francisco’s transportation and housing problems.

If the $600,000 gift is designed to bolster Google’s image as a good corporate citizen, it probably also makes good business sense. “Thousands of Googlers live and work in SF,” said Jenna Wandres, a spokesperson for the company replied to our inquiries by email.

Marc Touitou, director of the city’s Department of Technology, told us the park Wi-Fi system will be entirely the city’s, and that no third party corporation will determine who can use the service or under what terms.

“It’s not a Google network, it’s not a Wi-Fi name from Google. It’s a donation, a gesture,” said Touitou. He added that talks with AT&T to let the company roll out a Wi-Fi network for all of Market Street were recently cut off because his office has decided to build the system as a fully municipal network instead.

Touitou’s office has plans to light up free municipal Wi-Fi along the Embarcadero, in the Castro, Noe Valley, and perhaps even on Muni buses in the near future. With the parks, Touitou said the idea is to gain back the confidence of the public, to show that the city can do this on its own. Touitou also said that he hopes the city will budget funds for these Wi-Fi systems so that they’re not reliant on corporate gifts.

“We reserve right to leverage this model where companies can put money in because it’s in their interest,” Touitou said. “They don’t care what name is on the network so long as they can dump their traffic on it.”

A public utility model will allow San Francisco to own and operate Wi-Fi across the city and to allow telecom companies to funnel mobile traffic through the city’s infrastructure, likely for a fee. Touitou said it doesn’t make sense for the city to give away its Wi-Fi infrastructure as it is a limited and increasingly valuable asset.

“The day we sell it would be a sad day,” Touitou added.

He described the city’s two radio towers, 200 buildings, thousands of utility poles, and the fiber optic grid that can connect these as the backbone of a robust municipal wireless network. Telecom and Internet companies will pay to use the infrastructure under this model. Most privacy experts who examined San Francisco’s prior Wi-Fi plans have yet to weigh in on the parks network. Revelations about the NSA’s vast spying programs have consumed the attention of groups like EFF and the ACLU.

Touitou said, however, that the city’s Wi-Fi privacy policies will be strong. “This isn’t a third party network trying to market to you,” explained Touitou. “It’s a city network that wants to facilitate traffic, and we want to have the privacy respected.”

Even as San Francisco plans its next steps with city Wi-Fi, Google is rapidly expanding its own wireless network operations. Already the company controls the citywide Wi-Fi network for Mountain View where the “Googleplex” is located. Google also has Wi-Fi networks scooping up communications in Boston’s South Station and New York’s Chelsea neighborhood. The terms of Google’s Mountain View deal do not limit Google from collecting data, and users are required to sign in with a Google account. Google also recently announced that it will take control over Starbucks’ thousands of Wi-Fi networks, creating a potentially vast trove of consumer data and a marketing platform for both companies. Starbucks has 50 locations in San Francisco.

AT&T, which lost the Starbucks contract to Google, and also lost its bid to take over Market Street’s airwaves, has its own data mining projects that tap the company’s Wi-Fi networks in 30 countries for personal information, and to route telecom traffic.

So even with municipal Wi-Fi, tech and telecom companies will still have ample ability to siphon off communications data straight from wireless networks and hand it to the feds or to advertisers.