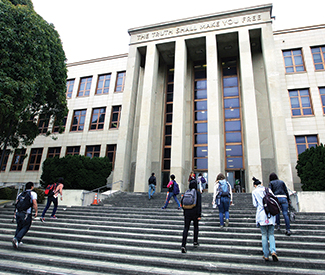 City College of San Francisco had its accreditation revoked by the Accrediting Commission of Junior and Community Colleges in July, and now the ACCJC is getting a taste of its own medicine — its own existence has been threatened over its treatment of City College.

In an Aug. 13 letter to ACCJC President Barbara Beno, the Department of Education found it out of compliance with the Education Secretary’s regulations governing accrediting agencies, as well as the ACCJC’s own internal rules.

“Therefore, we have determined that in order to avoid initiation of an action to limit, suspend or terminate ACCJC’s recognition, ACCJC must take immediate steps to correct the areas of non-compliance in this letter,” the letter reads.

The DOE found the ACCJC noncompliant in four areas: A conflict of interest because Beno’s husband served on the visiting team that evaluated City College, no clear policies on who should serve on those teams (with the letter noting the teams were stacked with administrators rather than educators), no defined distinction between “deficiencies” and “recommendations” or indication of their severity levels, and failure to give CCSF two years to correct those deficiencies, as ACCJC policies call for.

Ironically, the ACCJC has plenty of time to correct its own shortcomings. “The process in this case is that ACCJC will have an opportunity to provide information about the steps it has taken to come into compliance with the cited criteria in its response to the draft staff analysis of the agency’s petition for renewal of its recognition, which is currently under review,” DOE spokesperson Jane Glickman told the Guardian, noting that there will be a hearing in mid-December, with possible actions ranging from limiting the agency’s authority to giving it another year to come into compliance.

But she said the DOE can’t directly help City College: “The Department does not have the authority to require an agency to change any accreditation decision it has made. The agency (ACCJC) needs to amend its policies and procedures and provide documentation that it follows its amended policies and procedures to demonstrate that it is in compliance with the cited criteria.”

The California Federation of Teachers, which filed the appeal with the DOE, wants the ACCJC to reconsider its sanction of City College in light of these validated concerns over its process.

“We are gratified that the U.S. Dept. of Education agreed with us that the process was deeply flawed, and we call on the ACCJC to rescind its unprecedented decision to deny accreditation to CCSF,” CFT President Joshua Pechthalt, wrote in a press release.

But ACCJC Vice President of Policy and Research Krista Johns told us that DOE’s concerns were narrow and shouldn’t affect its actions against City College:”The overall result of the US Department [of Education]’s analysis and study of the documents presented by the CFT about the ACCJC really affirmed that we are in compliance to a very large degree with all of the many regulations that touch on accreditors.”

But it’s still an open question whether the DOE’s findings will affect the decision to revoke City College’s accreditation and turn control over the institution to a state-appointed special trustee.

“We’re still analyzing the letter. There’s a lot in there,” Paul Feist, spokesperson for the State Community College Chancellor’s Office, told us. “I don’t know if it could say there is any reprieve [for City College]. Regardless, there are a number of problems with City College that need fixing.”

But even a cursory analysis of the letter reveals something that raises suspicions about the integrity of the entire process: the DOE letter raises concerns about why the ACCJC chose to go beyond its own policies to sock it to City College.

“I think the way the commission operates is okay,” he told City College’s newspaper, The Guardsman. “I’ve dealt with their policies and operating procedures at other institutions where I worked that were dealing with addressing accreditation problems—not to the same degree as here at City College—and the process worked there.”

But Karen Saginor, the ex-City College academic senate president, said the DOE criticism of the process should be taken into account in the appeal of the accreditation revocation decision.

“It’s pretty exciting, that letter,” Saginor told the Guardian. “It’s recognition from an important authority that there are irregularities in the process that put us on show cause. We’ve been saying ‘it wasn’t fair.’ And we’ve been told ‘its a totally fair process, you’re just not happy because you don’t like the result.’ Now we have an important authority verifying what we’ve been saying.”