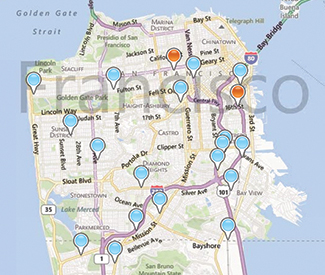 In the newest of the city’s recycle-pocalypse saga, two Safeway recycling centers are shuttering their services, further narrowing the places in San Francisco where consumers can get their can and bottle deposits back from the government.

The Japantown Safeway on Geary Boulevard already evicted its team of recyclers, and the Safeway at Church and Market streets will soon follow suit.

Early media reports suggested the services would soon be replaced by reverse vending machines, but Safeway spokesperson Wendy Gutshall told the Guardian it’s still exploring all of its options.

“In San Francisco, it is easy to recycle with curbside recycling,” she told us. “The vending machines are a relatively new option and we have been testing them in other locations.”

Safeway has two options for those locations, in lieu of a recycling center: Pay a state-mandated fee to offset a lack of recycling, or to use the reverse vending machines.

The vending machines are a growing problem for San Francisco consumers, advocates say, because they process only one can or bottle at a time, making it nearly impossible for consumers who bring bags full of recyclables to process their buyback in a timely manner.

Ed Dunn, the executive director of the Haight Ashbury Neighborhood Council, which formerly oversaw the recycling center at Kezar Gardens in Golden Gate Park, thinks this is a trend that may not stop.

“This wave of closures will trigger (more closures) in in-store recycling across the northern half of the City,” he said. And the numbers back that up. There were 30 recycling centers in San Francisco as recently as 1990, and the state agency Cal Recycle shows there are now only 20 — an unspecified number of which are recycling vending machines.

Cal Recycle said only two of them are vending machines, but a visit to some of the sites revealed there are more than two, and that there may be a discrepancy in its data.

Supermarkets who make more than $2 million annually, like the two aforementioned Safeways, serve as “convenience zones,” mandated by California law. Those zones cover a half-mile radius around a supermarket that are convenient places for consumers to bring their recyclables to get back their five or ten cents per can or bottle.

But when large supermarkets like Safeway apply for exemptions with the state at a cost of $100 a day, or $36,000 a year, the burden of recycling falls onto each one of the businesses in a half mile radius around those supermarkets.

That liquor store on the corner? They have to pay people for their bags of recycling, or pay the same fees as the Safeway. Many businesses can’t afford either option, said Regina Dick-Endrizzi, the director of city’s Office of Small Business. That, and they don’t have the space available to put the reverse vending machines as an “out.”

“When you’re a transit-first city, it’s harder. This law was really written for suburbia,” she told the Guardian. “We’re getting denser.”

San Francisco’s density means Safeway’s decision can affect many local businesses. If a convenience zone in Santa Rosa closed, for instance, maybe five businesses would be affected — and they’d have plenty of space in a parking lot to deal with recycling.

But when the Haight Ashbury recycling center closed down, more than 50 businesses were affected.

The state bill was crafted in 1986, which makes it outdated in a number of ways, Dick-Endrizzi said. But the convenience zone requirements need to be amended on a state level, meaning a fix could be months or years away. “This is not going to be a quick solve,” she said.

In the meantime, stores must apply for exemptions, which are numbering too many in San Francisco at this point, said Mark Oldfield, communications director for Cal Recycle.

“The point of the convenience zones to have places for people to recycle,” he told us. “If they’re all exemptions, there’s no place for convenience.”

But even when supermarkets put in recycling machines, consumers and the city still lose out, critics say.

Kevin Drew, the zero waste coordinator at the city’s SF Environment, brought the problem to the Small Business Commission in December. “I’ve heard concerns from homeowners and consumers saying ‘There’s not a place to take my bottles and cans, I’ve got to drive there, and there’s a huge long line when I get there.'”

That’s the rub: When many San Franciscans think of people who collect bottles and cans, they think of the homeless, maybe vagrants, certainly poor, who take them from our curbside bins and trash cans. But even if you don’t identify with those folks, they’re not the only ones depending on these recycling centers.

“My experience in going to the centers and seeing what happens is that where there are certainly is a robust group of scavengers and poachers,” Drew told the Small Business Commission. “There’s a steady flow of people from a restaurant, people coming with kids… You’d be surprised.”

He said that of the $18 million a year in recycling San Francisco produces, two-thirds of that comes from recycling centers. So if you think “everyone” uses curbside recycling, think again. The Guardian’s research bears out the idea that there are still regular folks using recycling centers. As we covered the city’s closure of the Haight Ashbury Recycling Center (see “Canned,” 12/4/12), we met families, kids who brought in recycling for their allowance, bar and restaurant owners who wanted to make money back instead of paying for curbside recycling, and yes, vagrants. One of the customers we talked to was Kristy Zeng, a 30-year-old immigrant from China who worked with her 62-year-old mother to support the family with recycling revenues. “People look at her and say she’s too old [to get another job],” Zeng said. Finally, there’s the impact to the city to consider. Anyone who has ever been in Dolores Park on a sunny afternoon understands the role that recyclers play in keeping San Francisco clean and providing an elegant way for the poor to earn a living. With Safeway’s decision, both benefits are being diminished.