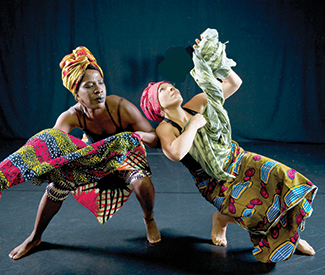 THEATER The idea of traditional dance as somehow frozen in time or resistant to modernity is a canard that received a thorough going-over at last weekend’s Performing Diaspora Symposium, which kicks off the Performing Diaspora series at CounterPULSE.

Attending to tradition while moving freely beyond it remains a hallmark of the artists gathered in the annual series. Joti Singh is a good example. Dancer-choreographer Singh — whose Red, Saffron and Green premieres this weekend — grew up in the American South with parents who hailed from northern India. One way she absorbed her family’s Indian culture was through training in Punjabi dances that, as an adult, she began blending with West African styles.

Singh’s Red, Saffron and Green is a celebratory accounting of the Gandar party, founded in 1913 San Francisco by Punjabi activists organizing on behalf of Indian independence from Great Britain. Singh’s own great-grandfather served for a time as the party’s president. Her innovative blend of performance styles thus could be considered a natural vehicle for a story that is transnational, local, and familial at once — indeed a historically astute expression of the elaborate nature of diasporic identity and of the personal as political.

The CounterPULSE series expresses an ongoing commitment to ethnic and traditional forms as a vital area of innovation and conversation in the larger world of dance. Its title, meanwhile, flags two overlapping impulses in presenting the broad range of work: the desire to highlight diasporic communities as important producers of performance; and a focus on dance as a channel of expression, investigation, and community-building for diasporic cultures, whether those cultures are borne by first-generation immigrants or their American-reared great-grandchildren.

Animating the daylong symposium (available as a podcast on the CounterPULSE website) were three panels featuring distinguished guests and at least one artist from the series — the absorbing Congolese dance-theater performer and choreographer Byb Chanel Bibene, who spoke to the harrowing experience, and body memory, of civil war that informs his Taboos and Heroes (running this weekend) in the first panel’s exploration of diasporic dance derived from the experience of genocide and war.

On the same panel, Cambodian dancer-choreographer Chey Chankethya spoke to the “silence” confronting the children of genocide survivors, and the physicalizing of that unspoken trauma in the body. Jazz tap dancer and vocal improviser Germaine Ingram spoke as an African American concerned with the legacy of slavery and dispossession, adding that it is the space for expression in even the most oppressive conditions that exercises her creative imagination. “I consider my work not so much about trauma as agency,” she emphasized.

The following two panels covered the challenges of “representing Africa” in the changing heterodox world of Bay Area African dance — which generated some lively and straightforward talk during the audience Q&A — and the presentation of sacred dance as performance for general audiences.

There were also bursts of live performance and music (in particular, from Ingram and master drummer and Bay Area legend CK Ladzekpo, of UC Berkeley and the Ghana National Dance Ensemble, who joined the panel on “Spirit Moves: Sacred Dance Onstage”). Meanwhile, Singh led an interactive “experiential lecture/demonstration” on Punjabi Bhangra dance that had the audience up and on the dancefloor, moving in ecstatic unison for the better part of an hour.

In all, the event generated a lot of productive questions and considerable momentum for the fifth annual Performing Diaspora series (this year curated by Roko Kawai, Lily Kharrazi, and Umi Vaughan), which features work-in-progress showings from six individual artists over two weeks. The varied stories and distinctive aesthetic styles on display amount to a unique tribute to the cultural persistence and improvisation that make up life in the diaspora. *