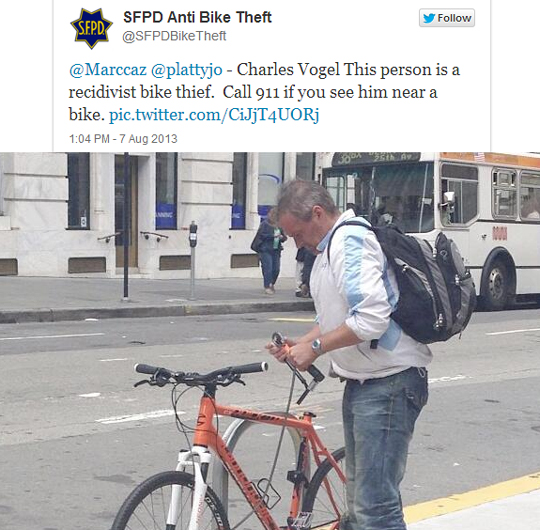 Thinking of stealing a bike in San Francisco? Think twice, as your face may be plastered all over the Twitter-verse by the SFPD’s new anti-bike theft Twitter account.

Officer Matt Friedman is the mastermind behind the SFPD’s new twitter handle that tweets photos of recovered stolen bikes, but also of bike thieves as well. A cyclist himself, Friedman created the account after being fed up with bike theft victims not filing police reports, tracking their own serial numbers, or claiming bikes in this enormous SFPD bike graveyard, shown in this instagram photo.

The SFPD recovered over 850 bikes last year, and was only able to return about 150 to owners, according to a report by The City’s budget and legislative analysis office. Friedman said that really, really grinded his gears.

“I’m a bike rider too, so it hits home especially,” Friedman said. “Bicycles are expensive, and its all a part of making the city a green city. We embrace bike riding here.”

The Twitter account, @SFPDBiketheft, tweets photos of recovered stolen bikes, but also has tweeted a photo of a repeat-offender bike thief in the middle of, allegedly, stealing a bike.

@Marccaz @plattyjo – Charles Vogel This person is a recidivist bike thief. Call 911 if you see him near a bike. pic.twitter.com/CiJjT4UORj

Then they tweeted his mugshot.

While there are concerns with putting photos of alleged criminals before they’ve had their due process, Officer Friedman said he took his time verifying the information, and made sure only to tweet the photos of a repeat offender.

And there is that matter of the alleged thief being photographed with the saw in his hands.

“I’ve had several encounters with this gentleman in the past, he was holding a angle grinder, it saws off locks, basically,” Friedman said.

But Jeff Adachi, The City’s elected public defender, said that The City could be potentially on the hook for a lawsuit if the SFPD continues to tweet photos of alleged bike thieves.

“I think the practice of tweeting photos who are suspected of committing crimes in the future is hugely problematic,” he told the Guardian. “It creates a potential liability for The City if the police are wrong, and it doesn’t allow for the process that we have to determine guilt or innocence.”

He compared the process to the long-established database of sex offenders, where photos and addresses are listed in a government database. In this case, Adachi said, there are no legal guidelines for whose photo is tweeted and whose isn’t.

And as for Mr. Vogel, who is pictured in the photo in question, Adachi was still strict about what should be tweeted. “Now if its true someone saw somebody sawing a lock off, you have evidence of a crime. Then you can get an arrest warrant and arrest them,” he said. “We have to be careful we don’t accuse people of crimes before a crime has been committed.”

Putting the criminals themselves on blast though doesn’t seem like a bad idea to everyone, and looks promising to Leah Shahum, the director of the San Francisco Bicycle Coalition. She said it doesn’t go far enough.

“We know that while individuals stealing bikes is an issue, the greater concern is organized bike theft rings,” she said. But she also said the SFPD need to take it a step further. “We urge the police to focus on these highly organized bike theft rings, where fencing operations are exploiting low-income individuals by buying bikes for pennies on the dollar, and reselling them online or at flea markets across Bay Area.”

A freelancer for the Guardian even chased down the bike theft black market back in 2007, which you can read here. We asked the SFPD for a response to Shahum, and they said they’d get back to us on their efforts to thwart the bike rings.

Shahum’s call to action should wrankle the bike chains of all cyclists in San Francisco. The thefts are big business for criminals — The City’s budget analyst found that the value of reported and likely unreported bike thefts for 2012 was a whopping $4.6 million dollars.

As I wrote that, I felt a disturbance in the force, as if thousands of hipsters were crying out in panic at once. But there’s hope, as Officer Friedman’s new Twitter account has reunited bikes with their owners in only its first few weeks.

He stressed that one of the easiest things a cyclist could do to deter theft is to make it harder for the thieves to get through to your bike. The bigger a pain in the ass it is, the less likely they are to take it.

“The Sheldon Brown locking method,” he said, then dropped the mic. Well, the phone.

For the unintiated, the Sheldon Brown locking method involves securing your rear wheel to the rear triangle of your bike around a pole or post with a U-lock.

The SF Bike Coalition also stressed the need to register your bike and serial number, and they have plenty of resources for that on their website.

Much kudos to Officer Friedman, and spread the word — maybe one of those hundreds of bikes in SFPD’s storage is yours?

Follow @SFPDBikeTheft on Twitter. For more information about the impact of bike theft on The City’s economy, check out the SF Bicycle Coalition’s post on it here: http://www.sfbike.org/main/shocking-new-report-on-san-francisco-bike-theft-showcases-need-for-real-solutions/