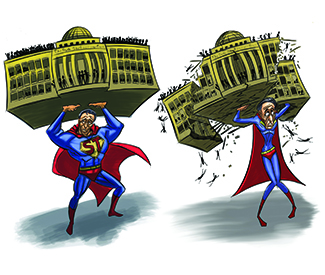 [UPDATE: As this article was going to press, the ACCJC had its own accreditation threatened over its treatment of City College.]

City College will survive, it will stay open, it will prevail.

In July, the college was hit with a black eye from its accreditors, the Association of California Community and Junior Colleges, and informed that it would be losing its accreditation in exactly one year. Loss of accreditation would mean no state funding, no federal funding, and degrees would no longer be recognized.

The college has one year to shape up and meet 14 requirements mandated by the accreditation commission. But in trying to meet those requirements, the college itself may change its course offerings and eliminate classes that serve as critical resources for working-class students.

It’s only been a month and a half since the damning news hit the college, but things are already starting to look very different. Meanwhile, dissenters who’ve raised concerns about the new direction things are taking complain that they’ve been silenced at every turn — their public forums dissolved and their elected board removed.

Critics also say Bob Agrella, who was given the decision-making power of San Francisco’s locally elected Board of Trustees when the state chancellor appointed him Special Trustee with Extraordinary Powers — earning him the nickname Super Trustee — isn’t listening.

Much of the outcry at City College revolves around a potential loss of classes that serve communities of color in San Francisco. While activist group Save CCSF has led the charge for the past year, other advocacy groups are now jumping into the fray to air concerns from a different perspective.

Local activists with Chinese for Affirmative Action held a press conference on July 8, decrying the potential closure of City College as an issue affecting all San Francisco immigrants.

“The closure of City College is nothing short of a civil rights crisis,” said Vincent Pan, executive director of CAA.

Pan read off statistics that should have every San Franciscan worried. Students enrolled in City College’s non-credit section, which offers English as Second Language classes and certification training for electricians, mechanics and firefighters, are 75 percent people of color. Those non-credit classes are the most likely to be eliminated, Pan said.

Student groups have been concerned for some time over the reformation of the college’s mission statement, which establishes funding priorities as well as values. The accrediting commission had City College change that mission statement to prioritize transfer students and those seeking associates degrees. As a result, non-credit classes could be cut in the name of austerity, raising alarm for CAA.

“If the college served 70 percent white, affluent students there’d be an outcry,” Pan told the Guardian. But poor communities of color have less of a voice in our political system, and the programs that benefit them may soon get the ax, he said.

That’s a shame. One student at the conference, Victoria Chan, said that “growing up around sweatshops in Chinatown, I feared injustices you wouldn’t expect in San Francisco.” She shared her experience of being told by sweatshop owners, who employed her grandmother, that she’d never escape that life.

It was her first college course at City College, she said, that helped pull her up and out.

But Susan Hsieh, communications and membership manager for the CAA, says Agrella doesn’t seem receptive to concerns about the loss of courses that predominantly serve communities of color.

“I think it’s important Agrella maintains a connection with the community,” she told the Guardian. At this point, she charged, “I don’t think he has.”

The Guardian worked with college officials to arrange an interview with Agrella, but it was scheduled for a date after the publication of this article.

Concerned students have started a website, movecitycollegeforward.org, where San Franciscans can submit letters to Mayor Ed Lee asking that their voices be heard. But the public already had a formal system for input with the democratically elected Board of Trustees, and now they are powerless.

“That is a real and legitimate concern. I think in Sacramento and at the accreditation commission there is a real bias against non-credit,” he said. “The proposals around that have suggested there are people who feel community colleges should get out of the non-credit business.”

But now, stripped of decision-making power as a trustee, Mandelman can’t look out for those communities.

John Rizzo, Anita Grier, Natalie Berg, Chris Jackson, Mandelman, Lawrence Wong, and Steve Ngo are the elected Board of Trustees at City College, and Shanell Williams is the student-elected student trustee. For the next year at least, they have absolutely no say on what happens at City College. They will hold no meetings, and some were even barred from workgroups.

For about the past year, Agrella sat in on every public Board of Trustees meeting as a Special Trustee, with veto powers of the board. When City College’s accreditation status changed, he was promoted to his current position. The Super Trustee now acts with the full power of the college’s local board, which makes policy and funding decisions for City College.

One of his first acts on the job was to boot some trustees off their only workgroup.

Anita Grier, Shanell Williams, and Rafael Mandelman were all summarily barred from entering a room with a workgroup that’s been tasked with selecting a new, permanent chancellor for City College. Shanell Williams, the student trustee, took to Facebook to denounce the move.

“Today I was barred from the Chancellor Search Committee by CCSF campus police,” she wrote. “Student representatives should not be treated like this. I will be talking to the State Chancellor about this bullying and retaliation toward me by Bob Agrella.”

Agrella also put an end to the public board meetings, the main forum for members of the public to air concerns about City College. The meetings were broadcast live on the web, and recorded into video and audio formats.

Under the new system, decisions about changes at City College will all be made behind closed doors.

Agrella left Trustee John Rizzo on that chancellor’s search workgroup, implying that he had specific disagreements with the trustees he barred. Though Grier and Mandelman can’t match Williams for sheer volume of polemic speech, they voiced criticism of the accrediting commission in the past. In a video Agrella released to the public on City College’s website, he voiced disapproval for critiques of the college’s accreditors.

“I’ve dedicated my entire life to community college education, but I’ve never had a more important task than this one,” he said. “I’m well aware of the concerns expressed about regional accreditation. It has many facets. If City College of San Francisco remains in the battle for this fight, it won’t survive.”

Meanwhile, some in the City College community agree that protesting against changes at City College needs to stop. Hal Huntsman, a math teacher who also helps run student organizing and advocacy group Students Making a Change said in his blog that “I’m happy to say that many of my faculty colleagues are beginning to recognize that continued protest against and criticizing of our accrediting commission (ACCJC) will likely have disastrous consequences.”

But he did clarify that sometimes leaders must be held accountable.

“Sometimes that means disobeying laws and directives,” he wrote. “And there is always room for professional, respectful input and dialog about important decisions affecting our communities, our students, and ourselves.”

Unfortunately, the platforms and places for such “respectful input and dialog” are disappearing.

At a July 25 Board of Supervisors committee hearing on City College, Sups. John Avalos and Eric Mar led a discussion about the accreditation commission. State representatives Tom Ammiano and Phil Ting are likewise spearheading efforts at the state level to investigate the process behind the ACCJC’s accreditation ruling, and the legality of its power as a quasi-public institution to make a decision that could shutter an educational institution.

But until then, the public won’t have much of a say about anything related to the college — and dramatic changes are already under way.

Agrella and interim Chancellor Thelma Scott-Skillman are crafting City College’s “closure report,” which details the steps the school must make in July should it fail to regain accreditation.

The initial closure report is only 12 pages long, and can be found on City College’s website. It details how students could transfer credits, how the college would sell its assets, and how faculty would be taken care of in the event of closure.

But nowhere in this report does it mention what would become of the college’s many social services. The Second Chance Program, which re-educates ex-offenders; the Homeless At Risk Transitional Students program, which finds housing for students; and the Veterans Resource Center, which gives counseling to more than 1,000 student veterans, are just a few among the many social services City College provides to San Francisco.

In the blink of an eye, they could be gone, and the closure report doesn’t include a contingency plan for them.

This is especially troubling to the staff at Larkin Street Youth Services, whose partnership with City College educates more than 20 homeless youth per month. It may not seem like a lot of students, but that partnership is crucial to their education, said Martha Mar, associate director of education at Larkin Street.

Mar especially worries that local colleges like Skyline and Laney are already filled to the brim with City College students who have left San Francisco, leaving little refuge for her students.

“It’s going to be hard. It’s already difficult for our youth,” she said, adding that many are already facing financial hardship or are recovering from addiction and lack of housing. “Having to go somewhere else, its going to be pretty competitive.”

City College’s social services, non-credit courses and myriad other offerings help nearly every vulnerable class of people in San Francisco. And now, the weight of all of those students rests on Agrella’s shoulders. “I think Bob Agrella is a good man, and trying to do a very hard job, I don’t want to make it any more difficult for him to do that job,” Mandelman said. “That being said, I have a lot of concerns about what’s happening to City College right now.” Many San Franciscans share those concerns, but it remains to be seen whether Super Trustee Agrella will begin addressing them.