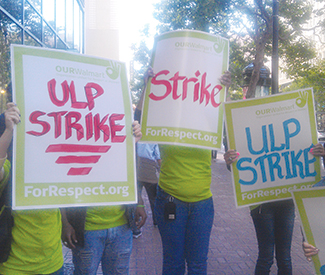 After working for nearly two years at Walmart in San Leandro, Dominic Ware said he’d witnessed too many co-workers struggle to make ends meet, and had felt disrespected for long enough. A co-worker recruited him to join Organization United for Respect at Walmart, or OURWalmart, a national group of Walmart associates organizing for better workplace conditions and pay.

“She couldn’t even pass the pen fast enough,” said Ware. Last October, he participated in the first mass-strike of American workers in Walmart’s history.

In May, Ware joined a hundred others in the longest Walmart workers’ strike yet, lasting from May 29 through June 8, to demand protection for strikes, livable wages, the option for full-time shifts, and respect in the workplace. After two weeks of striking, a legally protected activity for all workers, Ware went back to work. Things were normal at first. But in mid-July, he was fired.

Raymond Bravo, a maintenance associate at the Richmond Walmart, also joined Ware and other OURWalmart members on a caravan of striking workers to demonstrate outside Walmart’s corporate headquarters in Bentonville, Arkansas in May.

“I saw the lack of respect and favoritism,” said Bravo. “I wanted to join because I had no voice at Walmart, and I believe we should stand together.” Like Ware, Bravo returned to the job after Arkansas with little fuss.

“My next scheduled day was June 12, and nothing happened,” said Bravo. But two weeks down the line, Walmart began coaching associates for absences, and changing his schedule.

“I knew my days were numbered,” said Bravo. “I had already been disciplined for striking last year, and I’d heard from other associates that their hours were cut. That was kind of fishy.”

Roughly two weeks after returning, Bravo was fired. It appears that Ware and Bravo’s terminations weren’t isolated incidents. Around 60 Walmart associates across the country were disciplined or terminated after participating in the strike, according to OURWalmart. Since termination in retaliation for striking activity is illegal under the National Labor Relations Act, both Ware and Bravo plan to embark in legal battles to get their jobs back.

Walmart may rightfully fire an individual employee after he violates the company’s absence policy by missing work, Walmart spokesman Dan Fogleman told the Guardian. In Bravo’s case, “the decision has nothing to do with a specific protest or activity of that nature,” said Fogleman. “We have a strict policy against retaliation.”

Fogelman claims the OURWalmart demonstrations were not legitimate strikes, but “made for TV” publicity stunts for the union that has leant support for OURWalmart, the United Food and Commercial Workers. Walmart made a similar claim in response to the October 2012 strikes. The nation’s largest private employer, Walmart employs roughly 1.4 million American workers, all non-unionized.

“Walmart didn’t want to recognize a strike as a strike,” said Ware. “But they are playing with people’s lives. Those who are working 45 hours a week, that’s not a lot, but that’s all they have, and if you take that away, they’ll lose everything they have.”