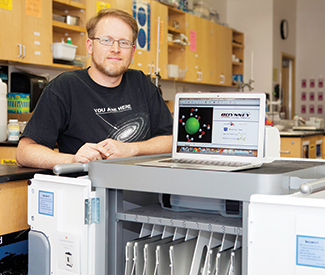 Therese Dudro, a junior at Lowell High School, is somewhat of an anomaly; she’s 17 years old and she’s computer savvy, but she doesn’t own a smartphone.

Nearly half of all high school students in the United States now own smartphones or tablets, according to the 2012 survey released by Project Tomorrow (demographics suggest that percentage is even higher in San Francisco) and almost all bring these devices with them to class — a 400 percent increase since 2007.

Educators are attempting to not only leverage the prevalence of emerging technologies with standardized curriculum, but also engage tech-obsessed students in what now seems an almost archaically old-school style of teaching.

While Dudro may be sans smartphone, she isn’t a stranger to computer-based technologies. “Computers on campus come in handy when I have to do research for an essay or work on a lab report” she told us. “One of the great things about Lowell is that students get to pick their own teachers, classes, and schedules; we call it Arena.”

At Lowell, students have long enjoyed the freedom to shape their educational experience. Until recently, Arena has always taken place in Lowell’s gymnasium, where students register for classes in shifts while teachers record the results and plugged the information into the schools official computer system.

This year, a team of students wrote a computer program making online registration possible. Lowell called this the Online Arena, and this new system was test-piloted last semester aided by the school’s new Wi-Fi system. The Online Arena will be in full force for the fall semester that begins Aug. 19.

With programs like Arena making the migration into the online world, the ever-emerging dependence on Internet-reliant resources is only creating more of a demand for educational strategies to follow suit.

How can a teacher compete with the single tap of a touch-screen? With resources such as Google and Wikipedia at each student’s fingertips, knowledge is seemingly infinite.

“When I was in school you didn’t question the teacher because that was the authority on information”, Michelle Dawson, SFUSD’s Educational Technology Program Administrator, told us. “But now with the web, the information is so abundant. We have to prepare our students to sort through that information.”

Dawson is somewhat of a newcomer to SFUSD (she settled into her new post on Dec. 3, 2012), but her short-lived stint here has already proved to be a productive one. On her watch, it seems that SFUSD’s tech goals will be brought out of the hypothetical and inserted into the everyday realities of high school education.

There’s a clear call for a high-tech re-vamp, and SFUSD is preparing to meet this need. SFUSD is gearing up all schools with campuswide Wi-Fi and infrastructures to support more digital engagement. Dawson said they are exploring the integration of iPads in some Bay Area classrooms, including at Lowell.

But most students are still waiting to experience the changeover firsthand. “We don’t have iPads at Lowell,” Dudro said matter-of-factly.

Actually, maybe she didn’t get the email, but the school does have some.

“We have 20 iPads, soon to be 35 total with a new planned purchase; 35 is enough for all students in one class,” Dr. Bryan Marten, an AP chemistry teacher who chairs the Lowell Technology Committee, told us. While this is far from the tech-laden goals rolling out in SFUSD’s future, it’s still evidence that these technologies are just beginning to bud.

Even the physical education teachers and sports coaches at Lowell have begun to have students use iPads to film each other and improve techniques, such as while at bat in baseball, to improve their swings.

Music classes use similar methods to improve bow movements on instruments. “Since iPads are not intended to be shared devices” Marten said, “there are definite limitations to using them in a shared environment. But they can still be useful nonetheless.”

Dawson has clear goals for encouraging students to take advantage of technology. She believes that tech is just one of many tools in a teacher’s arsenal, but that her ultimate goal for all schools under SFUSD’s umbrella is to impart “skills that will help students be able to work in places that are right in our backyard.”

Dawson cites big Bay Area employers such as Google, Facebook, Twitter and Salesforce, telling us that she wants to see our students participate in the booming tech industry that is so close to home.

To help with that goal, SFUSD is moving away from standardized education and now fully focused on the integration of its Common Core model. The Common Core standards have already been adopted by 48 States, focused on teaching performance-based skill sets. This is project-based learning model challenges students to interact with real-life problem-solving.

It represents what Dawson called the “shift from the teacher-directed learning to student-centered learning.”

In addition to teaching kids how to teach themselves, SFUSD is implementing the STEM Initiative, which stands for Science, Technology, Engineering, and Mathematics. This education coalition homes in on teaching skill-sets related to “programming, infrastructure networking, game building, modeling, CAD (computer-aided design),” Dawson said.

If tech is important to the future of local students, then it is imperative to have tech-savvy teachers. One of Dawson’s most immediate goals is to tune up teachers with tech, holding workshops that train them in the latest in scholastic programs, resources, and technologies. She has trained more than 300 teachers since arriving in December.

Yet funding for ambitious programs, workshops, and tech gadgets like the one’s Dawson hopes to implement is a constant challenge.

Marten, a tech liaison of sorts, is enthusiastic about new tech options available to public schools, but he also notes the reality of California’s budget for education.

“Ever since Prop. 13 passed, California’s per-pupil spending has fallen well behind that of other states,” says Marten.

The California Budget Project, a nonprofit research group, supports the observation with data showing that California has been in the bottom quarter of states in terms of per student spending in the last several years.

“As a member of Lowell’s School Site Council, which helps decide the school’s budget, I see that any technology initiative is competing with other worthy budget items to maintain course electives, keep class sizes down, stock science lab and art supplies,” notes Marten via email.

A car wash or bake sale won’t generate enough dough to buy every student an iPad or sustain a schoolwide Wi-Fi network — in fact, it doesn’t even come close. Marten estimates that installing Wi-Fi at Lowell cost roughly $30,000.

That’s why, for the present time, most public schools here in San Francisco are being outfitted with the tech-geek’s starter kit: The bare necessities include a computer lab, PowerPoint, and of course, the Internet (ideally Wi-Fi). “The vast majority of classes are equipped with the basics in technology.” Galileo High School’s Social Science Department Chair Matthew Jung told us by email. “All classrooms are supposed to have a computer and an LCD projector which teachers often use for PowerPoint presentations.” While PowerPoint enables classroom activities and lectures to be more interactive, new tools like YouTube that utilize Wi-Fi are engaging students in more current mediums like video and interactive infographics. Yet some question society’s growing reliance on technology, especially in places like the classroom. “Throwing technology at something is not a way to improve education”, Marten said. “There is still plenty of great teaching that can happen with a piece of chalk and an engaging classroom discussion. But when technology is used at its strengths, like by bringing the outside world into the classroom, and by getting students involved in their own education, it can be well worth the expense and hassle.” Like SFUSD officials, Dudro said she does see the potential in becoming well-versed in technology. When asked if she would ever consider upgrading to a smartphone, she said, “I do want one, but I don’t want it bad enough yet to pay for it myself.” Maybe she will reconsider the cost when the benefits are more fully realized on campus.