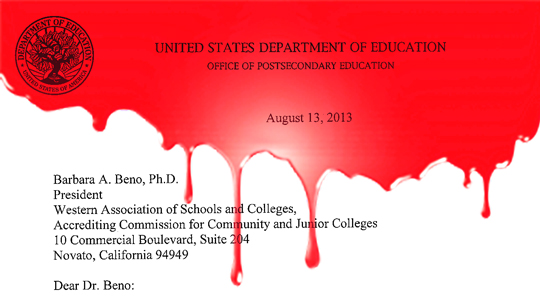 Their answers, via spokesperson Jane Glickman: “The Department does not have the authority to require an agency to change any accreditation decision it has made.  The agency (ACCJC) needs to amend its policies and procedures and provide documentation that it follows its amended policies and procedures to demonstrate that it is in compliance with the cited criteria. During the past few years, a small number of agencies have withdrawn from the recognition process after having been found out of compliance with a large number of criteria rather than facing a decision to deny their request for a renewal of recognition. A few agencies have had their recognition limited for a period of time.”

And how likely is i the ACCJC will be closed? “The language in the letter is standard whenever we find an agency out of compliance with any criteria because of the statutory requirements.  The process in this case is that ACCJC will have an opportunity to provide information about the steps it has taken to come into compliance with the cited criteria in its response to the draft staff analysis of the agency’s petition for renewal of its recognition, which is currently under review. The Assistant Secretary is required to make a decision within 90 days of the National Advisory Committee on Institutional Quality and Integrity (NACIQI) meeting.  The meeting is scheduled for mid December.   Possible decisions include:* continuing the agency’s recognition and requiring the agency to come into compliance with the cited criteria within 12 months and to submit a compliance report 30 days thereafter for review (as described above)* limiting the agency’s recognition in some way* denying the request for renewal of recognitionIn making such a decision, the Assistant Secretary would take into consideration the severity of the compliance issues and potential impact on the agency’s being a reliable authority as to the quality of the education provided by the entities it accredits.  It would not be based merely on the number of citations.” END UPDATE

City College had its accreditation revoked by the Accrediting Commission of Junior and Community Colleges this past July, and now the ACCJC is getting a taste of its own medicine — its own existence has been threatened over its treatment of City College.

[Editor’s Note: This story may have major implications as far as City College’s future accreditation status. We posted this ASAP, but will be adding more information from sources as the news develops. Refresh this page for the newest info.]

In a letter to the accrediting commission of the West, the ACCJC, the Department of Education found it out of compliance with the (Education) Secretary’s Criteria for Recognition, a set of national education standards all accrediting bodies are held to.

And the ACCJC’s non-compliance with those four standards could lead to its termination.

From the letter: “Therefore, we have determined that in order to avoid initiation of an action to limit, suspend or terminate ACCJC’s recognition, ACCJC must take immediate steps to correct the areas of non-compliance in this letter.”

The DOE found the accrediting commission, ACCJC, noncompliant in four areas: A conflict of interest as the president, Barbara Beno, had her husband serve on the visiting team that evaluated City College, no clear policies on who should serve on those teams, no clear distinction between “deficiencies” and “recommendations,” and what the severity level for those would be, and for not following their own policies on a two-year timeframe to correct those deficiencies.

Krista Johns, vice president of policy and research at the ACCJC, talked to the Guardian, painting the DOE letter in a positive light.

“The overall result of the US departments analysis and study of the documents presented by the CFT about the ACCJC really affirmed that we are in compliance to a very large degree with all of the many regulations that touch on accreditors,” Johns said.

The California Federation of Teachers had a different take on the letter. “We are gratified that the U.S. Dept. of Education agreed with us that the process was deeply flawed, and we call on the ACCJC to rescind its unprecedented decision to deny accreditation to CCSF,” wrote CFT President Joshua Pechthalt, in a press release.

But will the DOE’s findings halt the decision to revoke City College’s accreditation? That’s the $200 million question, and its all too soon to have any decisions drawn yet, said Paul Feist, spokesperson for the State Community College Chancellor’s Office.

“We’re still analyzing the letter. Theres a lot in there,” he said. “I don’t know if it could say there is any reprieve (for City College). Regardless there are a number of problems with City College that need fixing.”

But even a cursory analysis of the letter reveals something that could truly turn everything around: The DOE letter could be seen as saying that the institution is out of compliance with its own policies, which is huge. And it raises the question of why the ACCJC chose to go beyond its own policies to sock it to City College.

The letter basically says that the ACCJC treated “deficiencies” found in 2012 with enough gravity to begin revoking the college’s accreditation, but did not find them serious enough to follow its own procedure of only allowing two years to correct those same deficiencies, which the ACCJC found in 2006.

Basically, the ACCJC is contradicting itself, the DOE wrote, leading to the question: “Were they even deficiencies in the first place?”

“The agency cannot treat an issue serious enough to require reporting and to be part of the rationale for the show cause order, but not serious enough to enforce the timeframe to return to compliance, as required by federal regulation,” the report reads. “The commission has not demonstrated appropriate implementation of this regulation. Allowing an institution to be out-of-compliance with any standard for more than two years is not permissible within 602.20(a)of the Secretary’s Criteria for Recognition.”

Notably, the ACCJC’s own bylaws, under Article XI, Section 7, a college could appeal its accreditation decision if “there were errors or omissions in carrying out prescribed procedures on the part of the evaluation team and/or the Commission which materially affected the Commission’s action.”

In plain english, if the ACCJC messed up on enforcing its own policies, City College may get a pass on its accreditation decision.

The ACCJC responded to the allegation in its press release, saying “the (DOE) has determined the ACCJC should have taken adverse action on CCSF sooner after the 2006 evaluation review…However, the Commission feels it acted in a timely fashion.”

The accrediting commission denied that it violated any of its policies, and said the text of their bylaws would make it hard to use the DOE letter to make an appeal to reverse their decision to close City College.

“The important part (of the appeals process bylaws) is ‘which materially affected the Commission’s action,’” Johns, from the ACCJC said. She said any error on the ACCJC’s part would need to be seen as having enough gravity to have affected their decision making process.

And the independent panel that oversees the appeals process is actually chosen by Dr. Barbara Beno, president of the ACCJC, and a few other colleagues on the commission.

The commission gets to choose and appoint the people who investigate themselves, essentially.

When asked if this looked like a conflict of interest baked into the system, Johns disagreed.

“This is fully in line with regulations and practice of accreditation, she said, adding “The institution (City College) does have the right to challenge any hearing members for cause.”

“I think the way the commission operates is OK,” he told Sara Bloomberg, of City College’s newspaper, The Guardsman. “I’ve dealt with their policies and operating procedures at other institutions where I worked that were dealing with addressing accreditation problems—not to the same degree as here at City College—and the process worked there.”

The non-compliance was discovered after the California Federation of Teachers, working with City College’s teacher union, the AFT 2121, filed a nearly 300-page legal complaint against the ACCJC with the Department of Education, alleging that the accrediting commission had conflicts of interest in evaluating City College and did not follow its own policies or procedures. But as the battle over the ACCJC’s verdict to revoke City College’s accreditation raged on, a split erupted in the college.

A conspiracy theory popular among CCSF faculty (PDF) http://t.co/sZH8zQXd –I think it will encourage refusal to (cont) http://t.co/AlyxbDbJ

Even local media outlets have played it mostly straight, and generally have not held the ACCJC’s feet to the fire. The Guardian however published many articles, such as “Who Killed City College?” pointing out irregularities in the ACCJC’s process.

“Its pretty exciting, that letter,” Saginor told the Guardian. “Its recognition from an important authority that there are irregularities in the process that put us on show cause. We’ve been saying ‘it wasn’t fair.’ And we’ve been told ‘its a totally fair process, you’re just not happy because you don’t like the result.’ Now we have an important authority verifying what we’ve been saying.”

Time will tell what will come of the DOE letter, if anything. But for now it seems that if the ACCJC being out of compliance with its own rules is a conspiracy theory, then the Department of Education is wearing the biggest tin-foil hat in the room, and is onto something significant.