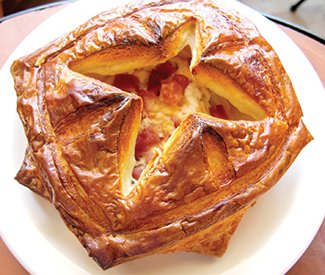 Since Fogust continues to pummel us mercilessly, a new Mission spot serving ramen should come in handy. The former Crazy Sushi (Sidebar: What kind of a name is Crazy Sushi? People, try harder. Please.) is now Ramen Izakaya Goku (3232 16th St., SF). This isn’t just some random ramen spot: the owner is Eiichi Mochizuki, who also owns the popular Men Oh Ramen on Geary and Shabuway. You can choose from five kinds of ramen, including porky tonkotsu and vegetable miso (and garlic clam, hmmmm), and the menu makes it very clear you won’t find any MSG in your bowl. And as you may have noticed, it has izakaya in its name, which means some small plates are available, like chicken wings, agedashi tofu, and beef tataki. And beer! Hours for now are Tue–Sun 6pm–10pm; look for later hours soon.

A new daytime hang has opened called Mission Public (233 14th St., SF. www.missionpublicsf.com) in the former Om Shan Tea. Breakfast sandwiches and De La Paz will help kick-start your day, while classic sandwiches like BLTs and tuna melts will be there for you at lunch. Free Wi-Fi means you can check your mail while munching on a Black Jet Baking Co. “pop tart.” Open Mon–Fri 7:30am–2pm (later hours and dinner will kick in once the beer-and-wine license is in effect).

Have you ever had a bar picnic? I know, sounds fun (and certainly less chilly than any outdoor picnic you would have in Ess Eff right now). Some fab ladies are behind RobberBaron (2032 Polk, SF. www.robberbaronsf.com), a new wine and beer bar in Russian Hill, and they are making sure you won’t go hungry as you taste your way through 10 wines by the glass, ranging from Matthiasson to some French selections, and a number of quality beers. The bar picnic offerings include cheeses like Barely Buzzed from Beehive to meaty bites like jamón serrano (all $7 each), and you get some fixin’s on the side. There are also black bean-chorizo dip, a hummus tostada, and edamame schmear. Oh yeah, and something called the Baron Bar, listed on the menu as peanutbutterymarshmelloychocolatechippykrispyness. Uh huh. The owners, Lucrecia Torres and Annie Flores of Marcello’s Pizza, wanted to create a wine bar that has a bar vibe, so no wine barrels as décor here. Thank you. Opening hours are Sun–Thu 3pm–11pm, Fri–Sat 2pm–12:30am.

Happy hour, always two words I am happy to see next to each other. First up, Chambers Eat + Drink (601 Eddy, SF. www.chambers-sf.com) is offering a new happy hour Tue–Fri 5pm-7pm — nice hours, those — with $5 beers, well drinks, and wines. Plus $5 bar bites, like housemade tater tots, chicken liver pâté, and smoked grit fries.

A Saturday happy hour, now that’s fresh. If you’re in SoMa, swing by Zaré at Fly Trap (606 Folsom, SF. www.zareflytrap.com) for $4 draft beers, $5 wines, and $5 well cocktails all night (at the bar only).

You can now say, “Cheers amd mazeltov!” at Shorty Goldstein’s (126 Sutter, SF. www.shortygoldsteins.com) which just landed a beer-and-wine license. From Mon–Fri, 4pm–6pm, you can now choose from six kinds of beers for $3.50 (like Lagunitas Little Sumpin’ Sumpin’, and Maximus IPA), plus wines for $2 off. The snacks are next level: think gribines, aka crispy chicken skin, with sweet onion purée on crostini, pastrami knishes, and savory challah French toast with gravlax, salmon roe, sour cream, chive, and egg.

If you’re a fan of butter, carbs, and French baked goods (oui!), then you’ll want to get yourself to Le Marais Bakery (2066 Chestnut, SF. www.lemaraisbakery.com) in the Marina, stat. The options are a-plenty, from excellent croissants to pain au chocolate, but the Volcan (French for volcano, natch) is a strong choice for those who are more savory-inclined. The light and flaky layers of dark golden pastry artfully contain a creamy center — the lava! — of ricotta cheese, lardons made with Llano Seco pork, Parmesan, and ham There’s also a vegetarian version. Boom.