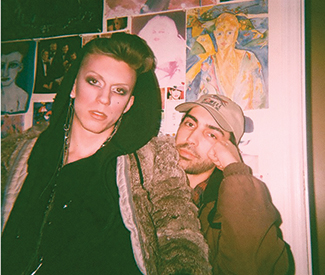 TOFU AND WHISKEY The moody “drag-pop” songs on Alexis Blair Penney‘s debut album, Window, were written with an ex-boyfriend in mind — Seth Bogart, aka Hunx — yet in a cruel twist of fate, they’ll come to memorialize the death of another man, a best friend, collaborator, and roommate.

Known for his prolific appearances at club nights across San Francisco, including his own High Fantasy night with Myles Cooper, Penney moved to New York in the middle of the record-making progress, in part to live with Grant Martin, of the band Icewater, who also contributed all the guitar lines to Penney’s record. Martin, age 26, unexpectedly passed away on July 26, two weeks before the release of Window (Aug. 6, Ecstasy Records).

Penney’s first single from the album, emotion-packed dance track, “Your Eyes,” came with a stunning video, which premiered last Friday on Spin.com, showing Penney and friends at home, in the dressing room, in the mirror, and out on the dancefloor as the synth beats wobble and Penney soulfully coos. And there on the floor is a glimpse of Martin with his band, followed by the final thought: the video is “for Grant.” Truly heartbreaking stuff for the tender, creatively bursting artist.

“It’s this really crazy time because it’s like, I’m here, I’m in our house that we shared together, and I’m promoting this record he worked on with me, but he’s no longer here,” Penney says during a phone call from Brooklyn. “I’m in this manic post-grief moment, where I’m just going forward, charging ahead. I don’t know what else to do.”

“I’m going to miss this person for the rest of my life, but I can’t dwell on that now.”

Penney began working on Window, the record (there’s also a debut book called Window, which comes out on Peradam Press on Sept. 6), in the spring of 2011, while living in a Mission District apartment. He moved to Brooklyn in April 2012, but before that he converged on LA with collaborators singer-songwriter Jamie Crewe of Poisonous Relationship and Teengirl Fantasy’s Nick Weiss to write the bulk of the record.

The idea for the book came about later, when he met publisher Elizabeth Jaeger of Peradam. Penney had a mess of stories, and mentioned so while making small talk with Jaeger at a party. She loved his ideas and paired him with editor Michael Zelenko, who’s also from San Francisco.

They finished up the final manuscript for the book around the same time he was wrapping up the mixing of the record, at the start of this year. “I definitely didn’t plan for them to be companion pieces but they evolved that way. The main narrative arc of the book is this relationship, the dissolution of which is what this record is about,” he says.

That relationship, later revealed to be the one with Hunx’s Bogart, is what brought Penney originally to San Francisco from his home town, a suburb outside of Kansas City. He’d initially met Bogart when he was touring with SSION and they opened for Gravy Train!!! He and Bogart dated long distance, then Bogart moved Penney to the Bay Area, where they dated for a few more years before breaking up. “I’m actually going to see his band tonight, they’re in town,” Penney mentions. (Hunx, a fellow former SF-er who now lives in LA, was in New York on a tour promoting his newest release, Street Punk, described as “Darby Crash on helium,” which he’ll bring back to the Bay Oct. 21.)

“Its kind of all about me being accountable for how crazy I was.”

Some of the craziness he experienced while in SF can be chalked up to excessive drinking and other drugs — from which Penney now abstains. He’s stopped drinking, and says he sees life much more clearly now. And being able to write books and songs about it all has been a part of that process, airing all his dirty laundry. He interviewed Traci Lords last year for V Magazine, and she ingrained this mantra: nobody can say anything about me that I haven’t already put out there. He plans to come back to SF for a few shows in September, including a guest spot at High Fantasy. “That will be my first time back since I quit drinking, I’m excited to see it all with the newfound clarity that I have.”

His New York life seems slightly different from his known SF persona, mainly as he’s doing a lot less drag, and focusing more on these newer projects. “[Weeklies I’ve done here] just didn’t have the same kind of magic as High Fantasy. There’s something special about Aunt Charlie’s. It’s kind of really hard to compare to that.” He also hosted the Hot Boxxx Girls drag weekly at the Tenderloin’s Aunt Charlie’s, after Vicki Marlane passed away.

But he does have a new crew out there in NY, a kind of drag, multidisciplinary girl-group (drag En Vogue is the inspo), doing monthly reviews, called the House of Chez Deep. They feature heavily in that video for “Your Eyes.” The performers shown in the video alongside Penney are his two crews out there, the House of Chez Deep, and the band Icewater. “I have like, four drag queens on one side, then four — now three — incredible, super sweet straight guys who are musicians on the other side.”

“That’s where I’ve always been in between,” he says, “These super outré artists and these super intense music people. I hope my music resonates like that, this weird moment between all these different slices of culture.”

His personal sound influencers are just as broad. When he first started working on Windows, he was really into house music and poppy ’90s club tracks, but he also is long-inspired by late ’70s and early ’80s new wave and experimental albums like Marianne Faithfull Broken English, and Grace Jones’ Nightclubbing, along with the works of David Bowie, Yoko Ono, Massive Attack, even Madonna’s Ray of Light. “I really like these genre-blending anachronistic figures that make people want to draw a line in the sand.”

Ray of Light seems to be particularly close to Penney’s heart. He was given the record in his Easter basket as a the child by his music-loving and religious parents. His dad is a classical pianist, and his mom was a theater major and is a singer who liked Ella Fitzgerald, Joni Mitchell, and Heart. It was a “’70s-meets-old Hollywood aesthetic in a suburban home,” as Penney describes it.

He also discovered more weirdo music through religion, though tangentially. A kid brought Cibo Matto’s Viva! La Woman to his youth group one day. “I was really into anime then,” he says, “[Cibo Matto] kind of just felt like this Japanese export, anime soundtrack, but also just this so-crazy, in-your-face, and also really pretty sound too.” He found the song where Le Tigre name-checks Cibo Matto (“Hot Topic”) on the Internet, and that opened him up to Kathleen Hanna. “That was like this landslide into this whole crazy world of punk and these women making it, all of it.” He fell into electroclash and joined an “ill-fated electro-rap group in high school.”

But despite his voracious intake of music, he didn’t start singing live until a few years into his stay in SF, and says he didn’t really have anything to write about until the demise of his relationship with Bogart, which eventually grew into Window.

Penney’s looking forward to people hearing the record, especially since many crowds seem only to have heard his earlier single, “Lonely Sea” (2011). He says he’s been heckled in the past while performing songs from the then-unreleased Window, but crowds perk up at the dancey notes of “Lonely Sea.” “I don’t really know who my audience is. Because it’s not this trendy college audience that’s like, only listening to gay hip-hop, but I do get really cool opportunities to play for more band-centric music crowds.”

“[With Windows] I’m trying to bridge that gap as well because, on some level, these are experiences everyone can relate to. Everyone has lost someone,” he notes. “It’s weird because the album is about losing a boyfriend and a love, but now it’s taken on this whole other dimension for me where it’s about losing my best friend as well.”