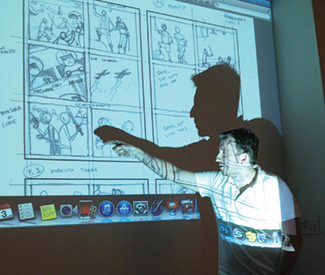 CAREERS AND ED Longtime Bay Area comics superhero Justin Hall basically wrote the textbook on LGBT comics-as-artform (No Straight Lines: Four Decades of Queer Comics, Fantagraphics, 2011) and just came back from a trip to Southeast Asia, where he taught Buddhist monks to express themselves via comic strips.

So when the California College of the Arts launched its new MFA program in comics, Hall was a natural pick to be among the first professors to teach the art, craft, and history of graphic storytelling on a graduate level. The two-year (with summer sessions) 60-student, low-residency program features classes, workshops, talks, and mentorship opportunities designed to immerse students in comics and begin to build an academic base for their study. It looks really cool.

SFBG How do you form a teaching curriculum for something like comics?

Justin Hall I teach the History and Cultural Impact class during the program’s first summer session. It’s a pretty intense class; for three hours a day I give lectures on the artistic and political history and cultural diversity of the art form, and hold critical discussions on selected readings.

We cover everything from the remarkable rise of the comic strip in the early American newspapers; to the explosion of manga in post-WWII Japan; to the Comics Code Authority and how it wiped out the majority of American romance, horror, and crime comics in the 1950s; to the reimagining of the superhero in the Silver Age; to the development of the competing “clean line” and “comic dynamic” styles in Franco-Belgian comics; to the outrageous work of the underground comix creators, many of them who based here in San Francisco.

I’ve taught some great undergraduate comics classes over the years, but the graduate students are engaged on a different level. I can lecture for hours on the subversive aspects of Wonder Woman, the influences of Japanese woodblocks on Tintin comics, and the artistic legacy of Little Nemo in Slumberland, and their brains don’t melt. They just ask for more. I love it! It’s a slice of geek heaven.

JH Over the course of the two years and three Julys, the students will have the majority of work finished on a book-length graphic novel or comics collection, which they can then self-publish on the web or in print, or take to publishers. That’s in addition to individual workshop and online assignments.

SFBG What kind of career opportunities are there for graduates who aren’t immediately contracted to Marvel?

JH We certainly hope that our graduates find success as creators of comics and graphic novels. There is an exciting expansion of material happening right now in North America, moving beyond the traditional superhero stories and into every genre. While comics are certainly no get-rich-quick scheme, they can allow creators to develop their story ideas with complete control, which can result in a property like The Walking Dead.

Outside of the traditional comic book market, book publishers are now interested in graphic novels, as evinced by the success of works like Alison Bechdel’s bestselling Fun Home. The internet is opening up new territories of creative and professional expansion;

we’re also going to see comics academia snowball, and our graduates will be poised to get those teaching jobs. Comics classes prove extremely popular across the board at high schools, community centers, colleges, and universities, and I have no doubt we’ll see more programs like CCA’s pop up.

Finally, the skills developed at the MFA in Comics don’t just apply to comics themselves; after all, comics require a complex toolbox of writing, illustration, design, calligraphy, color theory, etc. Ultimately, what we’re teaching is how to develop narrative in both verbal and visual ways, and those skills will prove extremely useful in a world that increasingly blends the two. I imagine many of our graduates will wind up in related fields such as animation, advertising, book art, and design, but with a unique perspective on storytelling and communication.

Our plan ends, of course, with comics conquering the world!