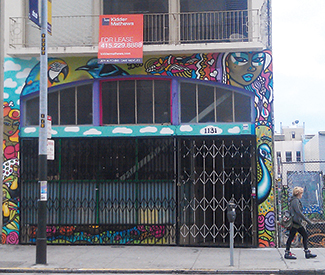 On a recent weeknight, a group of volunteers met up at a warehouse space in SoMa to hash out plans for The Learning Shelter, a project that has attracted hefty donations and enthusiastic volunteers but lacks a permanent home base. The brainchild of Marc Roth, a maker-movement enthusiast, the idea is to give homeless people a boost toward a brighter future by teaching them how to make things with 3D printers, and other useful skills.

Eight large shipping containers, on loan from supportive organizations, are currently sitting in a gated lot adjacent to the 14,000-square-foot warehouse, which housed a community-based project called [freespace] in June and July.

Roth and his core group of volunteers have plans to retrofit each container to be a “shop in a box” — a mobile classroom, outfitted with whiteboards and enough juice to power the Cubes (a brand name for 3-D printers), CNC routers, laser cutters, and other maker toys. The vision is to use those retrofitted shipping containers to lead three-month intensives in technical skill instruction for up to 30 adult students without homes at a time.

Roth is currently working at a laser company startup, but it wasn’t long ago that he was among his project’s target population. He moved to San Francisco from Las Vegas in September of 2011 and slept in his car (which was “part of the plan,” he explained) while struggling to piece together a new life in the Bay Area.

After one job opportunity fell through, he landed a gig cooking pizzas on Treasure Island. But the long shifts kept him on his feet all day, and aggravated a health condition that causes nerve damage. With few options and a disability sending his health into a downward spiral, it was only a matter of months before he hit rock bottom and checked into a homeless shelter run by the St. Vincent de Paul Society.

It was near 5th and Bryant streets in SoMa. Just a few blocks away, Roth discovered TechShop, a do-it-yourself community workshop that describes itself as being “on a mission to democratize access to the tools of innovation.” An atypical member of the homeless population, Roth had worked as a programmer in the past, and had an itch to learn laser cutting. So he shelled out some of his last dollars for a TechShop membership.

At first, he was grateful just to have found a place where he could tinker for about 10 hours a day while sitting down, since his health problems were still sapping his energy. “I’d never heard of any of these machines,” Roth said. But soon, he was voraciously teaching himself to use them. “When they showed me what a water jet was and what it could do, the hair on the back of my neck stood up,” he said of the device that uses high-pressure water for cutting. “This was Disneyland, multiplied.”

Today, Roth is housed (for now, but he’s still seeking a permanent place to rent) and teaches multiple workshops at TechShop. Yet he’s acutely aware that there are others who were under the roof of St. Vincent with him who still wake up every day to a harsh and destitute life on the streets.

During his time there, he said he befriended several people and got a sense of their innate curiosity and creativity. “I was dragging people with me to the TechShop,” Roth recalled. “In my little group of five to six people, we had a couple ideas for inventions.” With the skills that could be mastered at the community workshop, “they could actually go out and get a part-time job.”

Of course, there are obvious barriers preventing the vast majority of San Francisco’s homeless population from following Roth’s example of just going out there and doing-it-yourself.

People who lack income generally cannot afford training programs to learn new skills. Nor is shelter ever a sure bet: Homeless advocates have reported that it can take eight hours of waiting around in line just to reserve a shelter bed through the lottery system, making it difficult even for would-be job hunters to devote time to much else — let alone the challenges presented by addiction, behavioral health problems, or a lack of access to nutritious food or bathing facilities.

Roth’s vision is to combine temporary housing with a 90-day training program, so that up to 30 individuals can participate in intensive trainings in how to use maker tools. His plan is to partner with homeless service providers who already offer basic computer-training courses, and enlist their help in screening for candidates who’ve demonstrated an interest in technical skills and stand to benefit the most.

To date, Roth has collected several Cubes donated by 3D Systems, eight shipping containers loaned by ReAllocate and Ekology, and struck a partnership with a similar project that seeks to convert retired Muni buses to bathing facilities for the homeless.

But things are still coming together, and the looming question (“the elephant in the room,” as one meeting participant put it) is location. The use of shipping containers as the basis for classroom design is intentional and a key element of the plan, Roth said, because the only surefire guarantee for viability in astronomically pricey San Francisco is to build something that can be taken apart and transported somewhere else if necessary. When economic barriers prevent cash-poor idealists from carving out a physical space, they find ways to adapt.

High on Roth’s wish list is finding a church to partner with, since he believes religious establishments can more easily gain residential permitting. And it almost goes without saying that there is a crowd-funding video pitch in his future.

“When I moved into the homeless shelter,” Roth said, “I thought it would be my secret until I died.”

Now, in a city where the idea of harnessing a powerful narrative to fuel crowd-funding campaigns is practically a way of life in some circles, he’s relating that experience to anyone willing to listen. Venture Beat, a magazine that chronicles tech culture, profiled Roth in an article that ran earlier this year (“Homeless to Hacker,” May 16, 2013).

Ilana Lipsett, an organizer who helped launch [freespace], read about Roth’s project and sent the article around to her co-conspirators, saying it seemed to complement their endeavor perfectly. Soon Roth was dubbed a “[freespace] fellow,” his shipping containers had found a home in the lot next door, and one of [freespace]’s final acts before its lease ran out at the end of July was to host a hackathon for The Learning Shelter.

The buzzy word hackathon is sometimes used to refer to different things; in this case, it was an extended brainstorming session organized over the Internet. Some 40 volunteers attended that event one July weekend, and wound up forming committees dedicated to tasks like promotion, workshop instruction, or soliciting donations.

The foundational reason for [freespace]’s existence was to host a series of hackathons under the umbrella theme “civic hacking,” to inspire a kind of extended collaboration-fest that would produce projects to benefit civic life in some way.

Its doors were open to all, “and you had people who had lived on the street interacting with people who worked in tech companies,” Lipsett recalled of some events hosted at the 14,000-square-foot warehouse space.

Can something with staying power emerge from this short-lived experiment? The concept behind [freespace] was to show what could be accomplished if a dedicated space was provided, and permission granted, for the civic hackers to run wild with their ideas. Emerging from the 60-day experiment was a community garden, a bike-sharing project, a plethora of visual art and a core of volunteers committed to making The Learning Shelter a reality.

[Freespace] came about when the landlords who own the spacious warehouse, a former sewing factory, agreed to rent it to the core group of volunteers for $1 during the month of June. (For the month of July, the tenants crowd-funded $24,000 and used $10,000 of it to pay the rent.) But now, [freespace] is technically homeless, because the space isn’t really free. In fact, the 14,000-square-foot SoMa warehouse is downright unaffordable to the group of makers and idealists who fervently believe they can better the lives of homeless people by teaching them skills that are in demand in the Bay Area’s changing economy. Lipsett says [freespace] will continue in some form, and Roth is still looking for collaborators to help elevate The Learning Shelter, but it’s struggle in a city where the economic forces unleashed by big tech is making things harder for little tech.