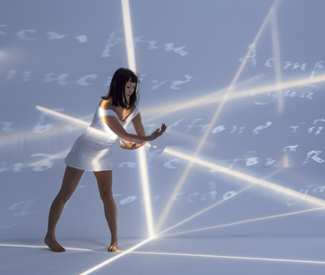 ODC/Dance’s 2013 “Summer Sampler” was a smash. The theater was completely packed, and it looked like the entire staff was present to greet audience members on the way to their seats, glasses in hand without spilling a drop. You couldn’t even get mad at latecomers, because theater director Christy Bolingbroke accomodated them so graciously. This was a party before the first performer even set foot on the Marley floor.

But it was dance that made this evening memorable. The short, tightly run program offered three smart, excellently chosen pieces, including a world premiere.

Does Kimi Okada’s wildly applauded Two if by Sea reference Paul Revere’s lanterns? Perhaps. The fact is that Okada, one of ODC’s three co-founders (she also runs the ODC School), has given the company a delicious morsel of intricate give-and-take pair dancing. Jeremy Smith and Vanessa Thiessen, the latter in her final performance before retiring, engaged each other in a duet in which being a jock, a snob, and a lover are all part of a contentious relationship.

Okada clearly has one foot in vaudeville, and how welcome that gift is. Two started with fiery tap dancing as Smith and Thiessen went at each other like boxers in the ring. Donning soft slippers, they extended their repartees into a whole body language, throwing out challenges and teases with their hips and wildly slashing arms. Though there’s no question that Two needs some tightening — even at the price of cutting some of Teiji Ito and Steve Reich’s rich percussion scores — the work also reminded us that humor in pure dance is very rare, because it is so difficult to pull off.

I didn’t see Kate Weare’s 2008 The Light Has Not the Arms to Carry Us when her own dancers performed it at ODC’s Walking Distance Dance Festival at the end of May. As set on ODC’s dancers, it confirms Weare as an intellectually challenging and fearless dance maker who repeatedly pushes her work nearly over the edge without letting it fall.

Light‘s two parts, a solo danced by an astounding Anne Zivolich, and a bravely rendered duet from Dennis Adams and Justin Andrews, don’t connect — except, perhaps in our heads. On stage, they simply follow each other, letting us hang in uncertainty.

Alone on stage, Zivolich seemed in a relationship with the parallel rectangles of light that became like characters, imposing their presence before slipping away from her. The fierce and nuanced Zivolich portrayed somebody (or something) haunted, terrified, and finally overcome. As she kneeled, a simple bob of her head traveled down her spine into backwards crawls and slides, leaps and headstands. When she spread her legs, the slit in her white dress revealed a dark crotch only to be covered up again. This was powerful stuff, with not a wrong move to be seen.

Looking at Adams and Andrews’ big, steady unisons, you search and find small differences. But when they start enacting partnering sequences, you want to see them go somewhere. They don’t seem to, but you sure end up smelling the dancers’ sweat.

Though it debuted in March at Yerba Buena Center for the Arts, ODC’s splendid Triangulating Euclid, choreographed by Weare, Brenda Way, and KT Nelson, looked almost brand new. It’s not just that the ODC Theater is more intimate than YBCA’s Lam Research Theater; it’s also that the Mission District venue has a steep rake so that you look down at (instead of more or less straight at) the dancers. Upstage activities, for instance, acquired more prominence. Nuances and facial expressions became more visible. However, not having wing space impinged on the entrances and exits’ effectiveness. The second viewing also clarified the interlocking of Triangulation’s two parts, much the way the dancers’ transparent white blouses, donned in the latter part of the program, still allowed us to see the initial section’s black leotards and tights.

The piece opened with Yayoi Kambara’s expansively exploring solo set to a voice-over by Karen Zukor, who restored the book on Euclid’s Elements of Geometry and to whom the piece is dedicated. The dancers stepped in to give us choreographic images of Euclid’s concepts, forming themselves into squares, triangles, diagonals, and parallels. This was living geometry that moved through its patterns with the inevitability and serendipity of a kaleidoscope.

When Kambara’s single, huge ronds de jambe smudged Maggie Stack’s carefully “drawn” chalk lines, the dance exploded into a series of highly individualized duets: lush and sensuous for Stack and Corey Brady; volatile and athletic for Adams and Kambara; and, particularly intriguing, one for Zivolich and Smith in which he seemed blind to her pleading. The number two was of primary importance to Euclid; it also is for dance. And what better way to explore its ramifications than to Schubert compositions.