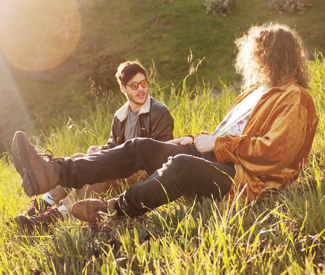 MUSIC Unless you’ve been living under a gemstone, you know that Outside Lands is this weekend, Fri/9-Sun/11 in Golden Gate Park (www.sfoutsidelands.com). And Paul McCartney, Red Hot Chili Peppers, Nine Inch Nails, and Phoenix are headlining, but there are a great many smaller acts filling up those days as well.

These Q&As were compiled from an ongoing interview series with the other bands — a few groups you should check out at the fest. To see the full interviews and our post-show coverage of the event, visit SFBG.com/Noise.

SF Bay Guardian What was the last great live show you went to?

Skyler Kilborn of Midi Matilda In Sacramento at a place called Ace of Spades we saw Gold Fields, it was really awesome. I think the crowd was engaged the entire time. They got off stage, danced around, got on the bar and kicked over somebody’s drink.

Logan Grime of Midi Matilda We’ve done a number of shows with guys from Capital Cities, it’s awesome to see how they’ve progressed over time, how much bigger their following has become. It was inspiring to see them.

SFBG What separates your performances from that of other artists?

Logan Grime of Midi Matilda A lot of people tell us they really enjoy the energy we bring to the stage. Our show has a lot of electronic elements to it; we don’t have people playing on stage. We both love to DJ and just make it a unique experience that’s different from a lot of the things we’ve seen. We’re trying to push it in a new direction. We’re not DJs, or a full live band either. We’re trying something new and it’s working out so far.

SFBG Are you guys looking forward to Outside Lands, are there any artists you’re definitely not going to miss?

Logan Grime of Midi Matilda The lineup this year is pretty amazing compared to some of the other years. This year’s strong in every day’s lineup. I know that no matter what I will not miss Paul McCartney. I’m excited to see so many bands.

Skyler Kilborn of Midi Matilda I’ve been fantasizing about playing the festival since the first time I went in 2009. A group I actually love is Vampire Weekend. I have not seen them perform but I’ve listened to their music quite a bit and would love to see how they do it.

SF Bay Guardian What was the last thing you did just to mess with someone?

Nathan Williams of Wavves I put my drummer’s phone number on my Twitter.

SFBG What was one of the most bizarre experiences you have ever had while under the influence (of anything), why was it so odd?

Stephen Pope of Wavves The first time I ever did mushrooms when I was a teenager, my friends and I broke onto a train bridge that ran across the Mississippi River between Memphis, Tenn. and Arkansas. We brought road flares and Roman candles, dangled off the edge, and had a fireworks party a few hundred feet above the river. When the mushrooms really started to take effect I got a little nervous about dangling off the side of the bridge, and climbed through the train stopped on the tracks to get to a more stable part. As I was climbing through the train, it started moving suddenly and I was carried a few hundred yards down the track standing between the two rail cars while tripping. I finally jumped and luckily didn’t fall to my death or get crushed by the train.

SFBG What was the last song you wrote about?

Stephen Pope of Wavves How everyday life brings about extreme anxiety and how I always think I’m dying of something. Geez.

SFBG What’s the best concert you have ever been to and why?

Trevor Powers aka Youth Lagoon Art Garfunkel — it was my first concert and I was a little boy with an afro.

SFBG Could you talk a little bit about the meaning of your song “Pelican Man”?

Trevor Powers aka Youth Lagoon Pelicans have a lot of history for spiritual significance. There are legends that say when a pelican’s babies are starving, the mother will stab her own breast with her beak to draw blood that her children can then drink. She’ll bleed out so her babies can drink her up, giving her life for theirs. A sacrifice similar to that of Jesus. Lyrically, that idea is contrasted with one of murder and serial killing. Violence out of ultimate love juxtaposed with violence out of complete hate.

SFBG Are there any artists at Outside Lands you’re looking forward to seeing?

Trevor Powers aka Youth Lagoon I’m actually not sure who is playing so I’ll have to look up the schedule tonight and start getting my planning on. I will wear my new camouflage jumpsuit.

SFBG What’s the best show you’ve ever been to?

Sage Fifield of the Easy Leaves I’m just going to reach to something relatively recent within the last few years. I went to an Avett Brothers show in South Carolina, it was not too many years after Kevin and I started playing. We got tickets and went to it. It was one of those shows where you’re transfixed by the performance itself, just the energy of it. The energy was just hot the whole night, I just literally stood almost in one spot the entire show. I think they’re great.

Sage Fifield of the Easy Leaves Right now I’ve really been enjoying playing some of our more traditional country-type tunes like one that jumps to mind is called “Since You’ve Gone,” it’s not on any albums. It’s a really straightforward country song. We almost always play it. When you play a song that much it almost becomes more than muscle memory, almost like the song plays itself. When that happens you can really relax into it in a way. For me “Get Down” got to that point. Of course, after saying this I’ll probably totally blow off the bridge.

SFBG Any groups you’re for sure not going to miss at Outside Lands?

Kevin Carducci of the Easy Leaves We’re so bummed we can’t go on Saturday because we have a wedding that whole day. At the top of the list for Sunday is Hall and Oats and Willie Nelson.