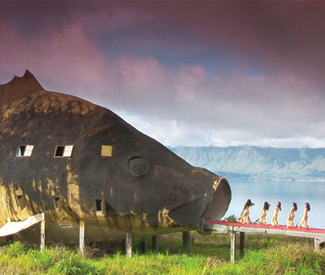 FILM What does Anwar Congo — a man who has brutally strangled hundreds of people with piano wire — dream about?

As Joshua Oppenheimer’s Indonesia-set documentary The Act of Killing discovers, there’s a thin line between a guilty conscience and a haunted psyche, especially for an admitted killer who’s never been held accountable for anything. In fact, Congo has lived as a hero in North Sumatra for decades — along with hundreds of others who participated in the country’s ruthless anti-communist purge in the mid-1960s.

In order to capture this surreal state of affairs, Oppenheimer zeroes in on a few subjects — like the cheerful Congo, fond of flashy clothes, and the theatrical Herman Koto — and a method, spelled out by The Act of Killing‘s title card: “The killers proudly told us stories about what they did. To understand why, we asked them to create scenes in whatever ways they wished.” Because Congo and company are huge movie buffs, they chose to re-create their crimes with silver-screen flourish.

There are garish costumes and gory makeup. Koto cross-dresses as a Wild West damsel in distress. There are props: a stuffed tiger, a dummy torso with a detachable head. There are dancing girls. And there are mental consequences, primarily for Congo, whose emotional fragility escalates as the filming continues.

The Act of Killing is, to be succinct, mind-blowing. It’s overwhelming and shocking. The unseen Oppenheimer — who openly converses with his subjects from behind the camera — is the film’s main director, with assists from co-directors Christine Cynn and “Anonymous;” given the subject matter, it’s not surprising that many Indonesian crew members are credited that way.

To understand how The Act of Killing came to be, I tracked down Oppenheimer, who’s been giving a steady stream of interviews with the film’s release. Initially, he says, he went with Cynn to Indonesia to interview plantation workers who were being poisoned by herbicides. Though the workers were in desperate need of a union, it soon became apparent that “the biggest problem they had in organizing was fear. Their parents or grandparents had been in a strong plantation workers’ union until 1965 — when they were put in concentration camps by the army because they were accused of being communist sympathizers. Many were [eventually] killed by local death squads. So the workers were afraid this could happen again.”

Oppenheimer and Cynn soon returned to make “a film about what had happened in 1965 — the horrors that this community had lived through, and also the regime of fear and corruption that was based on what had happened.” But the task proved more difficult than they’d planned.

“It turned out that survivors had been officially designated ‘unclean’ by the military and by the government, and were under surveillance. They weren’t allowed access to decent jobs. They even had to get special permission to get married,” Oppenheimer says. “So when we filmed the survivors, we would invariably be stopped by the police. They would take our tapes and our cameras, and detain us. It was very difficult to get anything done. And it was frightening, especially for the survivors.”

Along the way, Oppenheimer began visiting neighbors — “initially, quite cautiously” — whom survivors suspected of being involved in the disappearances of their loved ones. “The perpetrators would invite me in, and I would ask them about their pasts, and what they did for a living,” he recalls. “Immediately they would start talking about their role in the killings. Horrible stories, told in a boastful register, often in front of their children, grandchildren, or wives. Then they would invite me to the places where they killed and show me how they went about it. They’d launch into these spontaneous demonstrations. I was horrified.”

He was also intrigued. Before going any further, he went to Jakarta to speak with human rights organizations — making sure it wouldn’t be “too dangerous or too sensitive” to make the documentary he envisioned. “The human rights advocates said, ‘You must continue. You’re on to something terribly important. Nobody has talked to the perpetrators before,'” he says. “And the survivors told us to continue, because [a film like this] will point out something that everybody knows is true, but has been too afraid to say.”

So Oppenheimer returned to North Sumatra, filming every perpetrator he could find. (They were all boastful, he says.) “My questions started to shift from what happened in 1965 — to what on earth is going on now? Are they trying to keep everybody afraid by telling these terrible stories? Are they trying to convince themselves that what they did was justified? Or is it both at once?”

Because the men where so open with Oppenheimer, he felt comfortable asking more pointed questions about their actions. The method of the film, he says, evolved organically as a result. “I said, ‘You participated in one of the biggest killings in human history. Your whole society’s based on it. Your life has been shaped by it. I want to understand what it means, so show me what you’ve done, however you want. I will film the process and the reenactments. I will put this together and try and understand what this means, and how you want to be seen, and how you see yourself.'”

He met Anwar Congo during the course of these interviews. “He was the 41st perpetrator I filmed,” Oppenheimer remembers. “I think I lingered on him because somehow his pain was close to the surface. The past was present for him. That really upset me. And when he danced on the roof [where he’d committed multiple murders], I realized that this was at once a grotesque and horrific allegory for their impunity.”

Congo, whose gangster career began as a movie-ticket scalper, proved a fascinating and troubling main subject. “Anwar would watch the reenactments [of the killings he participated in] and suggest these embellishments. He would feel something was wrong with them,” Oppenheimer says. “But what he felt was wrong with them, but he couldn’t voice consciously, was that what he did was wrong. He didn’t dare say that, because he’s never been forced to admit what he did was wrong. As [another perpetrator says], ‘Killing is the worst thing you can do. But if you’re paid well enough, go ahead and do it, but make up a good excuse so you can live with yourself.’ Well, the government provided a good excuse in the form of propaganda, and Anwar has clung to that ever since. It’s not a surprise that at the end of the film, the reenactments become the prism through which he sees the horror of what he’s done.”

He continues. “People ask me, does Anwar feel remorse at the end of the film? I would say no, because remorse implies a kind of conscious, resolved awareness. Does he regret what he’s done? I would say, categorically, yes. He has nightmares. He is tormented.”

Though The Act of Killing, which is executive-produced by Errol Morris and Werner Herzog, is opening across America, its target audience in Indonesia will have more limited access. Still, Oppenheimer maintains, there’s hope; human-rights organizations have been screening the film for locals, including survivors and journalists. Those who have seen it, he says, have embraced it.

“The film has allowed Indonesians to say, ‘We have to address gangsterism and corruption in the government, and we have to address the fact that this whole system has been built on mass graves.’ It has enabled people to talk, without fear, about what they know to be true about their country. But there is a long way to go.”

THE ACT OF KILLING opens Fri/9 in Bay Area theaters.