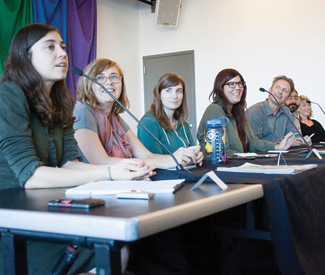 On July 31, we at the San Francisco Bay Guardian came face-to-face with living proof of something we’ve long understood perfectly: Our readers are not a shy bunch.

Discerning denizens of sfbg.com and inky-fingered print readers aren’t just unafraid to tell it like it is — they also care about the future of San Francisco and the wider Bay Area. You might call them real, live, informed and engaged citizens.

Nearly 100 attendees joined the Guardian’s six-member editorial staff for a community forum at San Francisco’s LGBT Center, hosted by this publication to solicit feedback, answer questions, and contemplate the future of the alt-weekly as we emerge from a difficult transition period.

Some discussion focused on the ouster of the Guardian’s longtime editor and publisher, Tim Redmond, who was invited but unable to attend. In mid-June, Redmond left the Guardian following a dispute with Todd Vogt, the CEO of the San Francisco Print Media Company, which owns the paper (see “On Guard,” 6/18/13).

Labor organizer Gabriel Haaland pointed to Redmond’s controversial departure as a source of “challenging questions and credibility issues” that he finds troubling. “At the end of the day, I believe Tim Redmond. I believe he was fired, and I don’t think it’s right. As a labor person, there’s something called job security after 31 years. And it’s great to say that the paper’s pro-labor, but if the paper isn’t treating its employees in a pro-labor way, then what’s the point?” Haaland said.

Freelance journalist Chris Cook, a former Guardian city editor, called Redmond’s departure a “big loss for Bay Area journalism,” and added, “I think the challenge going forward is how can the Guardian maintain and perhaps even sharpen its political edge, and focus and its accountability for progressive causes and communities?”

(On Aug. 5, Redmond announced that he has formed the San Francisco Progressive Media Center “and will launch a nonprofit online SF-based publication that will do real reporting and original cultural coverage,” launching as soon as next month).

Activist Denis Mosgofian said he didn’t want the paper to get watered down. “I am concerned if the paper moderates itself and begins to sound like middle of the road, because if that happens, from my point of view, there’s really no point in reading the paper,” he said.

San Francisco native John Kelly noted, “the Bay Guardian … provides an education for the people of San Francisco. It certainly did for me when I was trying to find out what my political viewpoints should be.” He closed with a word of advice: “Pick a fight with somebody.”

Some urged the editorial staff to uphold the Guardian’s longstanding tradition of acting as a progressive check against powerful forces. Lois Scott, a retired city planner, called for more investigative journalism, because “I think there is a great deal of corruption in this city that needs to be revealed.”

Some commenters referenced a statement that Editor Steven T. Jones made in his opening remarks — “I’ve always seen the Guardian as really fighting for the soul of San Francisco. We’re fighting a battle to win here, to create an informed and engaged citizenry.” — as did journalist Josh Wolf in an article on the event that he wrote for the website Journalism That Matters, “Fighting for the Soul of San Francisco.”

One commenter, who said he’d lived in the city since the mid-1960s, also spoke about the Guardian in the context of local history. “I love this city. When I hear the phrase ‘soul’ of San Francisco, the soul of San Francisco was an immense, loving, rebellious, warm community — so diversified, it was a blessing … When you care about the soul of a place, your mind and your heart will be clear.”

Among the elected officials who turned out were San Francisco Sups. John Avalos and David Campos, and Sheriff Ross Mirkarimi.

He added that ownership and staff members aside, the Guardian “belongs to us. It belongs to San Francisco.” (Rebecca Bowe)

Despite a tweet from one participant jokingly suggesting “#pitchforks” as the event hashtag, the Guardian community forum actually produced a rich and thoughtful dialogue. Here’s a sampling of ideas and feedback shared by audience members on index cards collected at the end:

“Will the ownership really allow the paper to fight the Manhattanization and gentrification of the city? This is the key issue facing the city.”

“SF is the tech industry’s sandbox — so many companies are testing concepts, products, ideas here. This puts SFBG in an incredible position to be the paper of record for the tech sector. Apply that brilliant, awesome, hell-raising instinct to covering the tech industry!”

“How can the Guardian appeal to new readers while retaining its political edge and resistance? How can you resist the push to soften in order to appeal to wider readership, while speaking and connecting in new ways that don’t compromise the politics?”

Letters to the Editor

As we promised in the run-up to the Guardian’s community forum, we shut off online comments to last week’s issue and sfbg.com blog posts (see “Calling all trolls,” Politics blog, 7/25/13). It was a week-long experiment to test what life would be like without the often toxic commentary that follows our stories.

So what did we learn? Well, while it might have been awfully peaceful on the old SFBG homestead, it was actually a little too quiet for our taste. And we learned that readers have grown accustomed to the ease of commenting online, so much so that few heeded our suggestion to send in an old-fashioned letters to the editor.

While we pursue an online comment registration system as part of our website redesign this fall, the comments section you love and hate is back on, full strength, so have at it. And here are some of the letters we received in the meantime. (Steven T. Jones)

I really appreciate and respect you guys digging in after Tim’s ouster. I’ve also been super impressed with the stories you guys have been running lately….on City College and the eviction trend and the BART strike. In particular, I saw last week’s story about the Giants concession workers (“Striking out,” July 24) and thought to myself: Wow, the Guardian is really on the ball right now.

So keep it up…..I think after all that’s been said about social media and the like….good local reporting is still the foundation to making a newspaper thrive.(Charlie Russo)

HOW BAD IS UBER…

Only brats don’t tip. And only assholes deny their worker-bee lackeys a tip-jar. Like the Giants concession workers, Uber driver are denied tips by their management. But here’s why Uber is a bigger asshole than that. Uber actually tells its clients/customers not to tip because ‘tips are included.’ Which is 100 percent bullshit. There is no tip whatsoever for Uber drivers. (Zark)

Why not just do like Paris where the program is working beautifully: let the city and the government do it. You mention (“Pedaling slowly,” July 31) that in New York the program was launched with funds from Citigroup Inc. without! Public Money!!! Who got the lion share of our tax money for the bail out? Wasn’t Citigroup one of them? Give me a break. (Nafiss Griffis)