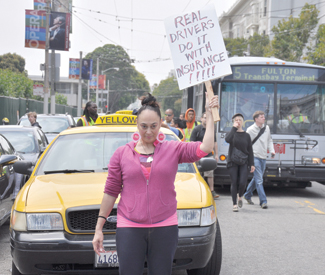 Lyft and its rideshare competitors are transforming the lives of the Bay Area’s underemployed and out-of-work, but the insurance industry won’t cover these drivers’ vehicles in the event of an accident, a glitch in the business model of the nascent “shareable economy.”

When I started driving for Lyft, I had no idea how I would pay my rent. After my first night shuffling strangers around the city, my worries seemed to be over. I had stumbled onto a stream of money that I could tap into whenever I wanted. I was making enough money that I started to think about replacing my aging Subaru sedan.

When I realized I could write off a good portion of the cost of a new car as a legitimate business expense, I nearly leapt at the opportunity. I started calling insurance companies to find out how much complete coverage would cost on a brand new car, but when I asked about driving with Lyft, I was told repeatedly that personal automobile insurance was insufficient.

The insurance companies that cover limos and taxis said they couldn’t help me either since my car wasn’t registered as a commercial vehicle. Although Lyft provides a $1 million excess liability policy, there was no way to insure my own car against an accident. The lack of available insurance has left many drivers afraid to continue shuttling passengers, despite decent pay and flexible hours.

More than $100 million in venture capital is invested in a handful of new companies working to disrupt the transportation industry. Lyft alone has raised over $80 million, including a $60 million infusion in May by Andreessen Horowitz, a $2.5 billion venture capital firm based in Menlo Park.

On July 30, California Public Utilities Commissioner Michael R. Peevey released his highly anticipated proposal to establish regulations for what the CPUC now classifies as a Transportation Network Company, or TNC. Even before the decision was announced, hundreds of taxis flooded the streets surrounding Civic Center Plaza in a protest and press conference.

“If you don’t regulate everybody, don’t regulate anybody,” said Rosham Bhatta, a 12-year-veteran cab driver, told us. “Why are they above the law? … They are doing exactly what we do without being regulated, that’s the problem we have.”

Bhatta said that on top of the $7,000 in annual commercial insurance premiums, they are burdened by numerous other fees that quickly eat away at whatever money they do make. Another driver emptied his pockets in front of me to demonstrate that he’d only made $31 since starting his shift at 9am. It was past noon.

Under the proposed regulations for TNCs, companies must adopt policies similar to those already in place by Lyft and its main competitors.

“Among other requirements established in this decision, we require each TNC (not the individual drivers) to be licensed by the California Public Utilities Commission (Commission),” said the decision, which will also “require criminal background checks for each driver, establish a driver training program, implement a zero-tolerance policy on drugs and alcohol, and require an insurance policy that is more stringent than our current requirement for limousines.”

The proposal acknowledges the lack of available coverage for TNCs, and as a result “the insurance coverage must be available to cover claims regardless of whether a relevant TNC driver maintains insurance adequate to cover any portion of the claim.”

“Lyft, Sidecar, and Uber have insurance coverage that currently meets our requirement,” said PUC Spokesman Chris Chow via email when I inquired about whether the existing policies these companies are carrying would step in should drivers have an accident where they are at fault and their insurance company refuses to cover the claim.

But the insurance now carried by the TNC won’t protect the driver’s own car, and at least one person has been told by her insurance company that she will be dropped unless she obtains a notarized letter from Lyft saying she won’t be driving for it anymore.

The trouble began for this driver, who spoke on condition of anonymity, when she got into a minor fender bender while driving a passenger in March.

“The guy whose car I bumped into was the neighbor of my passenger,” said the driver. “I never heard anything else from Geico for the longest time so I was sort of hoping that it didn’t have an effect on my coverage, but then at the end of June I got the questionnaire in the mail.”

A month later Geico told her that she’d be dropped from her insurance at the end of July unless she can demonstrate that she’s no longer driving for Lyft. Geico said that if she couldn’t get a letter from Lyft, she could send a notarized letter herself and the company “might take it under consideration.”

“I’m quite honestly not 100 percent sure what I’m going to do at this moment… (I) will reassess if it’s worth the risk. Or stop Lyfting,” she said. “It’s a big part of my income at this point and I would hate to give it up because I would have to find something else.”

EXCEPTION TO THE RULES

One ride-sharing start-up says the new PUC requirements won’t apply to it. Tickengo, a Daly City company that hired former Mayor Willie Brown as both its adviser and lawyer, also operates as a ride-sharing platform. But its drivers are limited in how much they can earn.

Drivers are only allowed to receive the amount of money it costs to operate a vehicle, according to AAA. This year that amounts to a hard-limit of $8,776. The service is designed to partner drivers with passengers whose destinations are on the way.

“Our purpose has always been true ridesharing, not commercial transportation. I assume that citizens still retain their civil right to share rides and share expenses,” said Tickengo CEO Geoff Mathieux wrote to us by email immediately after the PUC proposal was released. “This new regulation applies to commercial drivers like those found on Lyft and Sidecar, not Tickengo.”

After failing to find an insurance company that would cover TNC drivers, I asked the trade group Insurance Information Network of California if the industry is addressing this issue, and spokesperson Tully Lehman said that he wasn’t aware of any companies that would insure these kinds of drivers.

“The best option/advice for most drivers is to contact their insurer before they decide to become a driver for such a company. The reason is this: it is likely your personal auto insurer will not cover losses in an accident that occurs during the time you are driving passengers around for pay because you are acting as for-hire vehicle,” Lehman wrote via email. “An insurer may even decide to non-renew your policy for failing to notify them of your business. If you are driving passengers through one of these services, you as the driver will need to file a claim through your own insurer, and then, upon denial, submit a claim through to the service (Lyft, Uber, etc).”

Lehman wasn’t aware if any insurance companies plan to offer services that would protect these kinds of drivers, saying there would be a extensive process required before companies could make such products available.

“In California, any changes to existing products or creation of new products must be submitted to the California Department of Insurance for review and approval,” said Lehman. “Overall, these programs are new and it will take some time before the kinks get worked out of them.”

California Department of Insurance spokesperson Patrick Storm told me that his department “makes sure that we have a viable insurance agency and that people are able to get coverage.” But he said there is nothing the department can do unless an insurance company introduces a new product. “As long as companies are following the law, there’s no law that says companies have to write certain things. … We cannot dictate to the companies what they will or will not write,” said Storm. “This is a whole new business. … The marketplace is ahead of the products being offered.” Lyft spokesperson Erin Simpson told us is still looking for a solution to the problem. “The safety and protection of drivers and passengers is our top priority,” Simpson wrote via email. “We are in active conversations with the top personal insurance companies to educate them on this new form of transportation and affirm their support of our drivers.” Meanwhile thousands of drivers are at risk until the insurance industry catches up. Some drivers are aware of the problem before signing up with Lyft, some find out through the company’s Facebook group where drivers freely share information with each other, and perhaps some choose to never inform themselves about the issue, hoping that their insurance company won’t ask or find out.