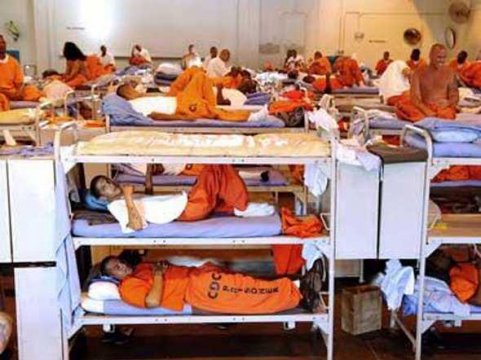 California just doesn’t get it when it comes to criminal justice. We have among the highest incarceration rates in the world (just below Russia’s, and about four times the European average); our prisons eat up far too much of our state budget; they are shamefully overcrowded, secretive, and inhumane; yet politicians from Gov. Jerry Brown on down refuse to show the courage or leadership to try a different approach.

When the conservative-dominated US Supreme Court — which on Friday upheld the lower court requirement that California reduce its prison population by 10,000 by the end of the year — is more progressive and enlightened than California’s leaders, you know there’s something seriously wrong here.

Rather than finally doing the right thing and complying with court orders to reduce a population that is still more than 43 percent over design capacity — despite reducing the population by 46,000 since 2006 because of court orders related to woefully inadequate health care in prisons — Corrections Secretary Jeffrey Beard yesterday responded to last week’s news by saying he will send more inmates to prisons in other states, at a high cost to California taxpayers.

What’s wrong with these people?!?! California prisons already lock up 124,363 people as of July 31, with another 8,959 inmates locked up in Arizona, Mississippi, and Oklahoma prisons at our expense. Tens of thousands more have been sent back to county jails under the state’s Realignment policies (which San Francisco, to the credit of its progressive approach to criminal justice, has managed to absorb and still reduce our jail population, thanks to smart alternatives to incarceration). And yet state officials still can’t get our prisons back to anywhere close to their design capacity?!?!

Of course, doing so would require rethinking decades of mindless “tough-on-crime” legislation that swelled our prison population. They’d probably also need to address the gutting of reentry and rehabilitation programs in the state, as well as conditions in some prisons that drive inmates mad (the subject of an onoing prison hunger strike). And they might even need to reform an economic system that is squeezing those on the bottom — sowing widespread economic insecurity that drives even law-abiding citizens to contemplate desperate measures —  just to maintain the wasteful churn of modern capitalism and the obscenely inequitable concentration of wealth at the top.

Hmm, I do believe that I’m starting to understand the motivations of our elected officials after all, those guardians of status quo power and privilege from both major parties. But if we’re ever going to move toward justice and sustainability, California’s prison system is probably a good place to start.