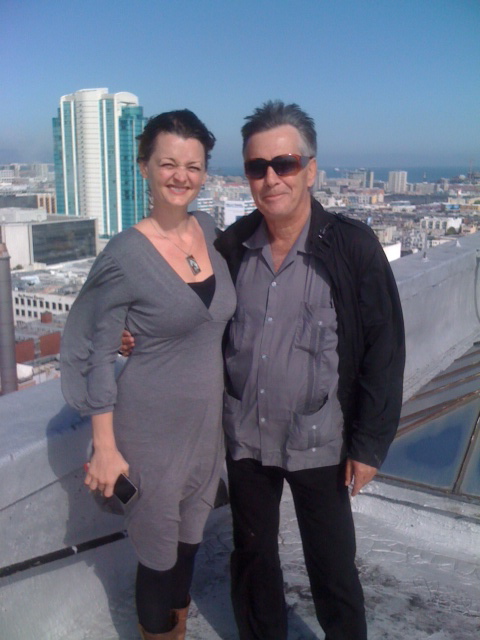 Remember that brief, exciting period last year when Woody Allen sightings were being breathlessly reported on ’round town, particularly in the Mission? Here’s your chance to see Allen’s take on San Francisco (it ain’t exactly glossy) in Blue Jasmine, which boasts a stellar performance by likely Oscar nominee Cate Blanchett as someone you would not want to have as a houseguest. Dennis Harvey’s take on the film here.

Also opening today: a doc about Napster, a so-so biopic of political theorist Hannah “Banality of Evil” Arendt, an action flick for Denzel Washington completists, and likely Oscar nominee (um…) Smurfs 2. What can I say…if you’re not a Woody Allen fan, it’s kind of a slower week. Read on for short reviews.

Downloaded The startlingly fast rise and even more abrupt demise of Napster is chronicled in this entertaining documentary by Alex Winter (yes, of Bill & Ted fame). Shawn Fanning dropped out of college in 1999 to work on an idea of greatly improving the then-tortuous downloading and sharing of MP3 files, soon moving to the Bay Area and drawing other friends (including co-founder Sean Parker) to launch Napster for real. When the program launched in mid-1999, it quickly took the world of music fans by storm, allowing any user to post or access any song for free — rapidly building a massive library that won tens of millions of fervent participants. But what the company saw as a “community building” global-record-swapping-party was viewed by an ill-prepared and appalled record industry itself as blatant copyright infringement. Artists themselves were sharply divided, with some (like Seal here) thinking Napster brought “true democracy back into the music business” while others, most notably Metallica and Dr. Dre (who both sued, as did various labels) loudly proclaimed that it was blatant theft of their work. (It’s worth noting that these were among the comparatively few acts who’ve gotten rich rather than screwed by the biz.) The somewhat one-sided thesis in this doc (on which Fanning is an executive producer) supports the founders’ continued plaint that “sharing” wasn’t “piracy” and that they always intended to integrate themselves with the established industry as legitimate fee-charing digital distributors — though each side says the other wouldn’t negotiate. In any case, after little more than two years, Napster was shut down by court decisions — though file sharing continues, and the industry’s poor adjustment to new technologies has seen it in fiscal freefall ever since. Napster staff, musicians, executives, and others offer their two cents here, with DJ Spooky providing an original score. (1:46) Roxie. (Dennis Harvey)

Hannah Arendt New German Cinema’s Margarethe von Trotta (1975’s The Lost Honor of Katharina Blum, 1986’s Rosa Luxemburg) delivers this surprisingly dull biopic about the great German-Jewish political theorist and the heated controversy around her New Yorker article (and subsequent book) about Israel’s 1961 trial of Nazi Adolph Eichmann. Played with dignified, slightly vulnerable countenance by the inimitable Barbara Sukowa, Arendt travels from her teaching job and cozy expat circles in New York to Jerusalem for the trial. There she comes face to face with the “banality of evil” in Eichmann, the petty careerist of the Holocaust, forcing her to “try and reconcile the shocking mediocrity of the man with his staggering deeds.” This led her to further insights into the nature of modern society, and triggered a storm of outrage and vitriol — in particular from the Commentary crowd of future neocons — all of which is clearly of relevance today, and the impetus for von Trotta’s revisiting this famous episode. But the film is too mannered, too slick, too formulaic —burdened by a television-friendly combination of posture and didacticism, and bon mots from famous and about famous figures in intellectual and literary history to avoid being leaden and tedious. A mainstream film, in other words, for a very unconventional personality and dissident intellectual. While not exactly evil, there’s something dispiriting in so much banality. (1:49) (Robert Avila)

The Smurfs 2 Look at it this way: any enterprise that employs Neil Patrick Harris can’t be all bad. (1:45)

2 Guns Rob a bank of cartel cash, invade a naval base, and then throw down against government heavies — you gotta expect to find a few bullet-hole-sized gaps in the play-by-play of 2 Guns. The action flick is riddled with fun-sized pleasures — usually centered on the playful banter and effortless chemistry between stars Denzel Washington and Mark Wahlberg — and the clever knot of a narrative throws a twist or two in, before director Baltasar Kormákur (last year’s Wahlberg vehicle Contraband) simply surrenders to the tidal pull of action. After visiting Mexican mafia kingpin Papi (Edward James Olmos) and finding the head of their contact in a bag, Bobby (Washington) and Stig (Wahlberg) decide to hit Papi where he’ll feel it: the small border bank where his men have been making drops to safe deposit boxes. Much like Bobby and Stig’s breakfast-time diner gab fest, which seems to pick up where Vincent and Jules left off in Pulp Fiction (1994), as they trade barbs, truisms, and tells, there’s more going on than simply bank robbery foreplay. Both involved for different reasons: Bobby is an undercover DEA agent, and Stig is a masquerading navy officer. When the payout is 10 times the expected size, not only do Papi, Bobby’s contact Deb (Paula Patton), and Stig’s superior Quince (James Marsden) come calling, but so does mystery man Earl (Bill Paxton), who seems to be obsessed with following the money. We know, sort of, what’s in it for Bobby — all fully identifiable charm, as befits Washington, who makes it rain charisma with the lightest of touches. But Stig? The others? The lure of a major payday is supposed to sweep away all other loyalties, except a little bromantic bonding between two rogue sharp shooters, saddled, unfortunately, with not the sharpest of story lines. (1:49) (Kimberly Chun)