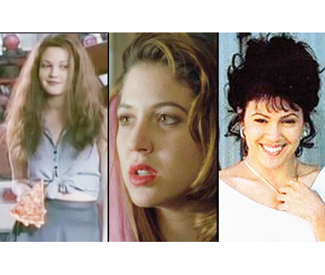 FILM Before Nancy Grace and 24-hour news channels turned every vaguely salacious story into a screaming headline — and before TMZ.com and Twitter captured and exploded every dark urge in the American heart — there was a more innocently lurid time. Proudly sordid news shows like Hard Copy and A Current Affair zeroed in on names like “Menendez” and “Bobbitt.” Sally Jessy Raphael investigated “Satanic baby breeders.” A white supremacist threw a chair into Geraldo Rivera’s face. In 1999, Vanity Fair dubbed the 1990s “the Tabloid Decade” — and one of the era’s most memorable crimes had to be the one involving Long Island teenager Amy Fisher.

Quick recap: Fisher was a 16-year-old temptress (or victim, depending on whom you believe) who hooked up with auto-body shop owner Joey Buttafuoco, 20 years older than her and inconveniently married. Their relationship grabbed national attention when Fisher strolled up to Buttafuoco’s front door and shot his wife, Mary Jo, in the face. (She survived, though they later divorced; in 2009, she penned Getting It Through My Thick Skull, a tell-all about being “married to a sociopath.”)

Naturally, pop culture couldn’t resist sinking its fangs into this deliciously trashy tale, and three made-for-TV films quickly went into production: Lethal Lolita — Amy Fisher: My Story, which aired Dec. 28, 1992, and starred Noelle Parker; The Amy Fisher Story, with Drew Barrymore; and Casualties of Love: The Long Island Lolita Story, with Alyssa Milano. (The latter two aired opposite each other on Jan. 3, 1993.) Two decades later, the Roxie hosts Triple Fisher: The Lethal Lolitas of Long Island, a campy, crazy-quilt film that mashes up the best (and worst) moments of all three docu-dramas. Obviously, I had to speak to the man behind the madness: Los Angeles filmmaker Dan Kapelovitz.

SF Bay Guardian It’s been years since l’affiare Buttafuoco. What made you want to revisit the story with Triple Fisher?

Dan Kapelovitz I actually had the idea [to edit the films together] right when they came out — so, over 20 years ago. I had some time off [recently] between jobs and I said, “Now’s the time to do it!” I called a friend of mine who was an editor, and we worked on it together. I mainly did it just as a fun thing. It’s gotten a lot bigger than I thought it was going to get. I’ve been showing it all over the country and people seem to really like it.

SFBG Did you watch all three when they originally aired?

DK I actually did. Two of them aired at the exact same time, so I had to tape one of them. It was a big media event at the time.

SFBG What did you find fascinating about the story, and why does it hold up today?

DK It was the first time in TV history that they made three films all about the same event. I think now the story’s almost kind of quaint, given 9/11 and everything that’s happened since. I don’t know, today, if that story would even get as much play as it did back then. I talk to young people, and they have no idea who Amy Fisher is, or Joey Buttafuoco. Some people say, “Oh, wasn’t that the guy whose wife cut off his penis?” They think it’s John Wayne Bobbitt.

I think people like Triple Fisher because it’s funny even if you know nothing about the story. And there are still tons of these made-for-TV movies. I just watched the Jodi Arias story. I watched the Anna Nicole Smith one. HBO now does these kind of high-profile ones, on people like Liberace and Phil Spector. I love ’em all. Some are better than others, obviously, but it’s a good genre. And they crank them out pretty quickly. These Amy Fisher ones, the trials went through September or so, and the movies came out late December, early January. So they’re almost in real time. Considering how quickly they were made, they’re actually pretty good.

SFBG How did you decide which segments to take from each film?

DK Some things I wanted because they were so hilarious on their own. Sometimes, the three movies would depict the same thing, but they’d be slightly different, so I’d want to put those together. Or sometimes I might want to repeat something that I thought was funny, like Lawrence Tierney saying “Shut up!” [in a scene from the Alyssa Milano version]. I went through it millions of times and kept improving the jokes, re-editing it.

SFBG Did you have a favorite among the three movies?

DK At first, my favorite Amy Fisher was Noelle Parker, the least-known one. I thought she was the most realistic, and the most sympathetic. That film came from Amy Fisher’s story. The one with Alyssa Milano comes from the Buttafuoco point of view. And the Drew Barrymore one is from a journalist’s perspective, so it’s supposed to be more objective.

But now I think I like the Alyssa Milano one the best. I think it’s purposely funny, and then it’s also really dramatic. And I love the [sidekick] character played by Nicky Corello, who [has the line] “Way to go, Joey!” He has all the funniest lines in the movie. I actually called him up and he came to a screening. It was really cool because he had the original script and he let me have a copy, and he was telling all these crazy stories. He’d never even seen the original movie.

We’re doing another screening in LA [Aug. 15 at the Cinefamily], actually, and Joey’s going to come. I wonder what he’s going to think of it! It should be pretty wild. *