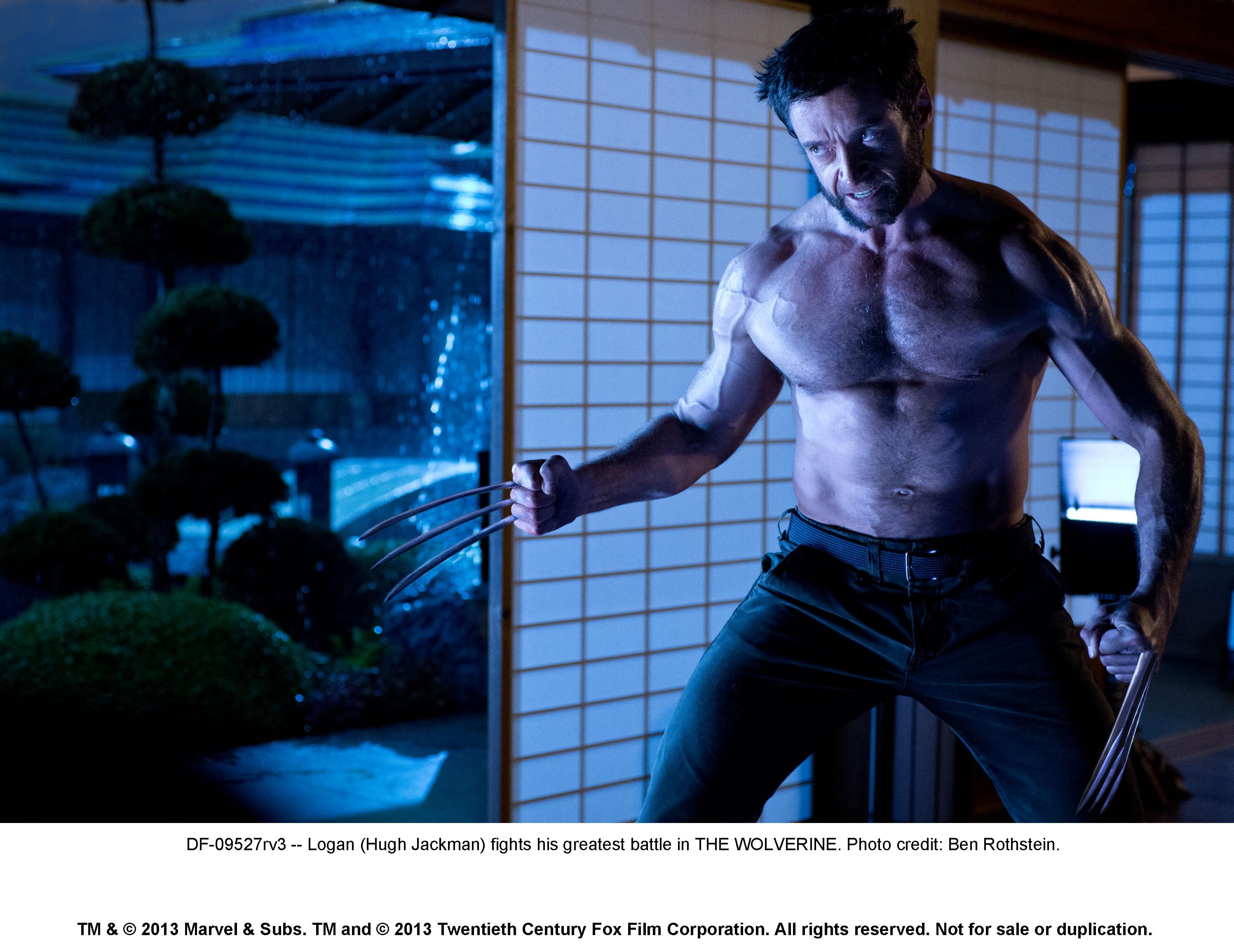 This week: the 33rd San Francisco Jewish Film Festival takes off with screenings all over the Bay Area; check out my take on some of the documentary selections here. Also, the harrowing documentary Blackfish opens, a film that will make you never want to visit SeaWorld again (with good reason). My interview with the film’s director, Gabriela Cowperthwaite, here.

Elsewhere, Hollywood hopes you’re ready for yet more claw-bearing Hugh Jackman (in The Wolverine), Danish actor Mads Mikklesen shines as a falsely-accused man in The Hunt; indie darling Andrew Bujalski delivers what may be his finest film to date with Computer Chess; a majorly great/bad/quotable/mind-blowing cult film plays the Clay’s midnight series; and more. Read on for our short takes.

Computer Chess Mumblecore maestro Andrew Bujalski (2002’s Funny Ha Ha; 2005’s Mutual Appreciation) makes his first period picture, kinda, with this stubbornly, gloriously retro saga set at an early-1980s computer-chess tournament (with a few ventures into the freaky couples-therapy seminar being held at the same hotel). The technology is dated, both on and off-screen, as hulking machines with names like “Tsar 3.0” and “Logic Fortress” battle for nerdly supremacy as a cameraman, wielding the vintage cameras that were actually used to film the feature, observes. Tiny dramas highlighting the deeply human elements lurking amid all that computer code emerge along the way, and though the Poindexters (and the grainy cinematography) are authentically old-school, the humor is wry and awkwardly dry — very 21st century. Keep an eye out for indie icon Wiley Wiggins, last seen hiding from Ben Affleck’s hazing techniques in 1993’s Dazed and Confused, as a stressed-out programmer. (1:32) (Cheryl Eddy)

Fame High This doc by Scott Hamilton Kennedy (2008’s The Garden) steps behind the doors of the LA County High School for the Arts, where teens toil in (and out of) the classroom to achieve their artistic dreams. There’s the jazz pianist with the overbearing stage dad; the sheltered ballerina whose Juilliard aspirations depend on her learning to loosen up on the dance floor; the sparkplug actress who hails from a theatrical family; and the harpist-singer whose mother moved with her from small-town Wisconsin to nurture her talents. As the year progresses, Fame High tracks each teen’s struggle to negotiate academics and arts, their relationships with their parents, budding romances, and rebellions both tentative and full-blown. In a culture in which insta-fame seems the norm, thanks to reality TV competitions and the internet, Fame High serves as a reminder that most show-biz careers are built on hard work and difficult lessons — with the added bonus of likeable, well-chosen subjects, all of whom happen to be easy to root for. (1:41) Elmwood. (Cheryl Eddy)

The Hunt Mads Mikkelsen has the kind of face that is at once strikingly handsome and unconventional enough to get him typecast in villain roles. Like so many great foreign-accented actors, he got his big international break playing a bad guy in a James Bond film — as groin-torturing gambler Le Chiffre in 2006 franchise reviver Casino Royale. Currently, he’s creeping TV viewers out as a young Dr. Lecter on Hannibal. His ability to evoke both sympathy and a suspicion of otherness are particularly well deployed in Thomas Vinterberg’s very Danish The Hunt, which won Mikkelsen the Best Actor prize at Cannes last year. He plays Lucas, a lifelong small-town resident recently divorced from his son’s mother, and who currently works at the local kindergarten. One day one of his charges says something to the principal that suggests Lucas has exposed himself to her. Once the child’s misguided “confession” is made, Lucas’ boss immediately assumes the worst. She announces her assumptions at a parent-teachers meeting even before police can begin their investigation. By the time they have, the viral paranoia and suggestive “questioning” of other potential victims has created a full-on, massive pederasty scandal with no basis in truth whatsoever. The Hunt is a valuable depiction of child-abuse panic, in which there’s a collective jumping to drastic conclusions about one subject where everyone is judged guilty before being proven innocent. Its emotional engine is Lucas’ horror at the speed and extremity with which he’s ostracized by his own community — and its willingness to believe the worst about him on anecdotal evidence. Engrossing, nuanced, and twisty right up to the fade-out, The Hunt deftly questions one of our era’s defining public hysterias. (1:45) (Dennis Harvey)

Plimpton! Starring George Plimpton as Himself Tom Bean and Luke Poling’s Plimpton! Starring George Plimpton as Himself, an affectionate portrait of the longtime Paris Review editor and “professional collector of experiences” who wrote books, articles, and made TV specials about his delight in being “the universal amateur.” His endeavors included playing football with the Detroit Lions, hockey with the Boston Bruins, and the triangle with the New York Philharmonic, among even more unusual pursuits. Some called him a dilettante (to his face while he was alive, and in this doc, too), but most of the friends, colleagues, and family members here recall Plimpton — born to an upper-crust New York family, he was friends with the Kennedys and worshipped Hemingway — as an irrepressible adventurer who more or less tailored a journalism career around his talents and personality. (1:29) Roxie. (Cheryl Eddy)

Samurai Cop Terrible movies deserve restoration too! Such is the case with this under-the-radar 1989 direct-to-video atrocity whose slowly accumulated cult audience now has a newly restored print to watch in apt contexts like the Clay’s midnight series. It’s a martial arts movie shot in the US by an Iranian director (Amir Shervan), with at least one porn star (Krista Lane of such classics as Fatal Erection, Days Gone Bi, Mammary Lane, and The Bitches of Westwood) in the cast. Shervan also wrote the script, and to say the dialogue is a tad ESL would be a very kind way of putting it. Low-end Miami Vice-like duo Joe (Matt Hannon) and Frank (Mark Frazer) are cops on the trail of Japanese gangsters led by Mr. Fugiyama (Gerard Okamura), with Robert Z’Dar (from 1988’s Manic Cop) as their main enforcer. Joe acts like the slimiest swingin’-dick stud on the fern bar scene, his spray-tanned, long-feathered-hair vanity just partially excused when he takes off his shirt to reveal Tarzan-worthy musculature. (Hitherto a film-crew carpenter, Hannon understandably never acted again.) Frank is, er, African American. (Black sidekicks never require much character definition in this sort of movie.) Between fight scenes that feature some of the most ludicrous martial-arts howls ever (personal favorite: “Wafu!”), we get numerous gratuitous soft core sex scenes that briefly provide a female full-frontal glimpse. Other highlights include the peppy aerobics-workout synth score, an outrageously swishy “comedy gay” Costa Rican waiter, and the opening credit “Hollywood Royal Pictures presents.” You will laugh, you will cry (from the pain). While Samurai Cop will no doubt be an experience to remember watched on the big screen with an unruly crowd, you might also want to check out its DVD extras, the most memorable of which is an interview with today’s Z’Dar — a huge, burly actor now incongruously hair-dyed, rouge-painted and otherwise completely weird-looking. (1:36) Clay. (Dennis Harvey)

The To Do List Mistress of deadpan Aubrey Plaza stars in this raunchy comedy about a recent high-school grad determined to go all the way (and then some) before she ships off to college. (1:44)

The Wolverine James Mangold’s contribution to the X-Men film franchise sidesteps the dizzy ambition of 2009’s X-Men Origins: Wolverine and 2011’s X-Men: First Class, opting instead for a sleek, mostly smart genre piece. This movie takes its basics from the 1982 Wolverine series by Chris Claremont and Frank Miller, a stark dramatic comic, but can’t avoid the convoluted, bad sci-fi plot devices endemic to the X-Men films. The titular mutant with the healing factor and adamantium-laced skeleton travels to Tokyo, to say farewell to a dying man who he rescued at the bombing of Nagasaki. But the dying man’s sinister oncologist has other plans, sapping Wolverine of his healing powers as he faces off against ruthless yakuza and scads of ninjas. The movie’s finest moments come when Mangold pays attention to context, taking superhero or Western movie clichés and revamping them for the modern Tokyo setting, such as a thrilling duel on top of a speeding bullet train. Another highlight: Rila Fukushima’s refreshing turn as badass bodyguard Yukio. Oh, and stay for the credits. (2:06) (Sam Stander)