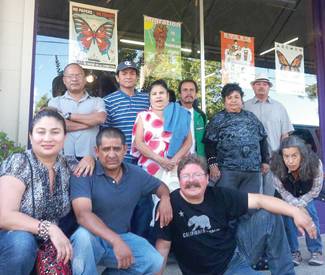 THEATER A white passenger van pulls to the curb in a Santa Rosa neighborhood, discharging a group of Latino men and women at the door of a converted warehouse. The visitors vary by age, class, and education. All hail from Mexico or Central America, but more recently Los Angeles, where they’re among the city’s thousands of jornaleros, or day laborers, making their way job by job, often without secure documentation or security of any kind.

Standing beside the warehouse on this quiet street, they could be mistaken for an ad hoc work crew. But the warehouse is a theater, and this sunny afternoon in June is the culmination of a precious week off. Not that these men and women aren’t here in Santa Rosa to work — just this time, it’s on a play.

Brent Lindsay and Amy Pinto, artistic directors of the Imaginists, greet the visitors as they collect outside the theater and saunter in, joining other members and friends of the Santa Rosa company. It’s the final day of a weeklong artistic exchange between the Imaginists and Teatro Jornalero Sin Fronteras (Day Laborer Theater Without Borders), a Los Angeles–based Spanish-language ensemble theater created by and for the immigrant day laborer population. The ten-member troupe, founded in 2008 under the umbrella of LA’s Cornerstone Theater and led by co–artistic directors Juan José Mangandi and Lorena Moran, has created 15 short plays that they perform mostly at day laborer centers across Los Angeles — although last year saw TJSF tour both Northern California and El Salvador. The plays examine everything from the legal and human rights of immigrant workers to the transnational cultures migrant workers share and foster.

After a light breakfast of coffee and pan dulce, the two companies gather in a circle for warm up exercises led by both Lindsay and Moran. Then they all get back to work on a playlet they’ve been developing from improvisations. It begins with two workers who alternately pay off and slip by a snoozing guard (played by Imaginists company member Eliot Fintushel) to dump toxic waste into a nearby stream. When this causes an environmental disaster, a government spokesperson (Pinto) assures people in the audience that their organic produce is safe. Meanwhile, a cleanup crew of migrant workers is slowly poisoned to death. A news team rushes to the scene of the eco-disaster, but seems to take no notice of the brown bodies sprawled over it. Left alone onstage, the workers rise as ghosts — beginning with one who sings, “They’re carrying me off to the cemetery. Don’t anyone cry for me. Just sing my favorite song…” — and one by one exit the stage.

Throughout, Lindsay directs from a chair audience-side, giving advice or suggestions. All, however, are welcome to chime in with comments and do. An elderly woman named Adela Palacios, for instance, suggests that before departing the stage each ghost can simply state their name and what they did for a living, a suggestion readily embraced by all. Soon the form of the scene has a solid arc, and a tone that makes a virtue of the mix of amateur and professional actors. Combining slapstick, winking asides, an eerie sense of tragedy, and a moving use of direct address, it’s a surprisingly affecting bit of work.

“We come to the theater as older people,” explains Moran. “But we feel we’ve found a company [in the Imaginists] like us. We share the same path.” A native of Guatemala who worked in business administration before fleeing domestic abuse and the country, Moran (translated by Gustavo Servin of the Imaginists) speaks eloquently about the company she joined five years ago amid a dangerous working life both foreign and alienating to her. She acknowledges frankly, “Theater saved my life.”

TJSF is currently developing its first full-length play, Caminos al Paraíso (Paths to Paradise), written by Mangandi and directed by Moran. This exchange in Santa Rosa, made possible by a grant from the Network of Ensemble Theaters, has offered TJSF members the opportunity to learn important technical aspects of crafting a full evening’s production from their more experienced colleagues. At the same time, it’s offered the Imaginists, which has grown into a bilingual company since rooting itself in Santa Rosa, a chance to advance its own mission through contact with a deeply community-driven Latino theater. But neither motive really captures the personal ties and mutual respect that have been forming here, the subtle and profound reciprocity of influence, and the solidarity emerging from it all.

“TJSF is a brave, important theater company that is telling stories that we don’t usually hear,” reflected Pinto by email. “Coming together for a week, we were able to strengthen our own resolve to tell these stories, not to be afraid of being deemed ‘political.’ For the Latino members of the Imaginists, the exchange was a catalyst to be empowered by their histories and stories. This exchange reinforced how necessary it is to have comrades, to share experiences and methods, to have a network of support throughout the country for this work.”

The Imaginists plan to travel to Los Angeles for another face-to-face meeting with TJSF over next steps. Together they hope to develop something that can tour to labor centers across the country.

In the meantime, inspired by the exchange, the Imaginists are concocting a new play, based on a famous children’s story, which will address the plight of undocumented people. Working title: REAL. *

For an extended version of this story, visit www.sfbg.com/pixel_vision.