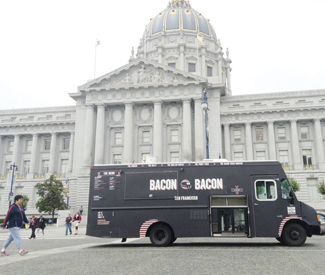 Bacon has its own buzz these days, infused with an almost cult-like enthusiasm that’s hard to explain. But the uptick in business that my employer, the Bacon Bacon Food Truck, has recently experienced can hardly be explained by the pork product’s faddish popularity.

Bacon Bacon is in demand more than ever, and it’s all because a small group of neighbors who raised a stink inadvertently set off a national media craze, thereby inspiring bacon-loving supporters to come out in droves and place their orders.

When Jim Angelus opened a neighborhood breakfast sandwich shop five blocks from where he lives with his wife and daughters in the Haight, he never imagined he’d set off a media feeding frenzy about bacon. But that’s what happened.

Jim is my boss. I am a news intern at the Bay Guardian and a recent hire at the Bacon Bacon Food Truck as a line cook. Our menu is crammed full of items like bacon-wrapped fried chicken, a bacon-filled parody of the It’s-It ice cream sandwich called the “That’s-That,” and in quintessential San Francisco fashion, a BLT with goat cheese called “THE L.G.B.T.”

We’re open at Brick and Mortar, on Mission and Duboce streets in San Francisco, for lunch service. We recently reclaimed our original Frederick Street location, pending installation of a costly ventilation system replacement to be OK’d by the Planning Commission as a result of a dustup stemming from neighborhood complaints.

But ever since a group of neighbors in proximity to our location in the Haight filed complaints with the San Francisco Planning Department about the smell of bacon, sparking a media firestorm, things have gotten a bit surreal.

A Wall Street Journal reporter recently interviewed us for what would become a front-page article. Bacon Bacon even made Saturday Night Live in May, with Amy Poehler informing the nation that a “San Francisco bacon restaurant” was closed for its bacon smell.

That media spectacle started to smell like business. Random San Franciscans, many of whom had only heard of us through recent headlines, began to walk up to the truck, stop by the new location and espouse gestures of solidarity to a crew of cooks bewildered by their sudden celebrity status. Many of these supporters had never even eaten the food.

It all started with a series of short San Francisco Examiner articles by Andrea Koskey, with catchy headlines like “Bacon Bacon Aroma Set To End,” which went viral in May. “One of the things I’ve taken away from all of this,” says Angelus, “is how few people called me [as the story was going viral] and asked questions.”

Maybe because it was about bacon, the media attention was largely sensational. “The Haight-Ashbury district was all about peace and love until bacon entered the picture,” Vauhini Vara’s Wall St. Journal story began on July 11, the day Bacon Bacon’s Planning Commission hearing was scheduled. When I asked Vauhini why she was doing the piece, said she just wanted to do more “fun” articles.

“Plus,” she added, as if to explain everything, “it’s bacon!”

Angelus started the Bacon Bacon food truck two years ago, moving away from the late nights and weekends of the restaurant business to do a lunch-only truck so he could have more time with his family.

But, as he said the day before the hearing as a recently hired personal assistant scrolled through journalists’ emails, “a lot of this has been a huge distraction in running a business.”

The Wong Family, which owns Ashbury Market, offered Jim a lease on the deli portion of their building to operate as a commissary for the Bacon Bacon Food Truck (which then had four employees, Angelus included), and they started making bacon. The Planning Department stipulated that Angelus needed a “limited use restaurant” permit to operate. That’s when the trouble started.

Shortly after Angelus opened his doors in January of 2012, a handful of neighbors complained about the smell of bacon and the influx of bacon lovers to the new restaurant in their residential neighborhood. Contrary to SNL-fueled legend, none of the neighbors “complained to the cops that [they] smelled bacon.” Instead, they filed a discretionary review application, a process in which anyone can urge the Planning Department to take action if it’s found that the case demonstrates an exceptional and extraordinary circumstance. The Health Department allowed the restaurant to operate in the interim, as long as issues with the Planning Department were ultimately resolved.

But when the issue still wasn’t resolved more than a year later, the Health Department imposed a 75-day deadline by which the planning permits must be secured. Once that deadline passed in May, Bacon Bacon was shut down. This prompted the media frenzy, which continued through July 11 — when the Planning Commission unanimously ruled that it could reopen as long as an air filtration system was installed.

Four major-network television crews filmed the three-hour hearing, periodically running out of the hearing room to grab more videotape. Phylis Johnson-Silk lives around the corner from Bacon Bacon, on Downey St. “If they put in a nail salon,” she said during the commission meeting, “[these neighbors] would complain about that. Put in a bakery, then it’d be the smell of yeast!”

“I know [the neighbors] call FedEx when the truck is double parked for deliveries on their block,” said Mike Shell, who showed up to defend Bacon Bacon independently of the company in a pork-pink tie.

In an email to members of the Haight Ashbury Improvement Association, HAIA president Ted Lowenberg urged opponents to attend the Planning Commission hearing. “We have to get as many voices as possible to attend to say the Commission must take discretionary review,” he wrote. “The owner has committed a number of cardinal sins vis-a-vis the normal process of getting a business started, and to simply let this slide through creates havoc with the planning code and process. It would like legalizing Al Capone’s liquor sales because he’s been doing it for a while, whilst getting away with murder. Now is the time to scream, ‘STOP THIS!!!'”

Neighbor David Nevins described for the commission the physical “clouds” of bacon smell that wafted down the block, “almost toxic smelling.”

His wife, Inge, visibly teared up after her turn to speak. “This should not be a popularity contest,” she said. “This should be about proper placement of a restaurant … There are people on our sidewalks eating this stuff!”

In Bacon Bacon opponent David Nevins’ plea to the Planning Commission, he cited the Wall Street Journal’s interview with the head of Iowa State University’s Sensory Evaluation Unit as evidence that the bacon smell was a nuisance, while complaining the media overexposure had turned the proceedings into a “joke.”

“I have no problem with what the health department did,” Angelus said. “They waited a year and a half for us to sort all this out and it wasn’t working. The Planning Department was really banking on us resolving the issue with the neighbors.”

If it weren’t for the Bacon Bacon buzzwords involved, it’s likely that none of us would have heard about any of this. The neighbors, who spent a lot of money obtaining top-level legal representation and footing the bill for all sorts of tests to check the credibility of Bacon Bacon’s operations, might have gained more traction if it weren’t for the public scrutiny.

But at the same time, it’s a prime example of the kind of story which gains national media attention simply because the topic is trendy.