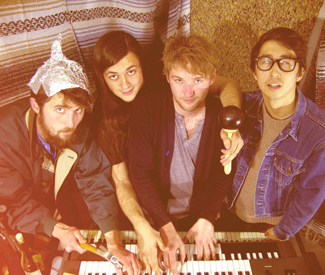 TOFU AND WHISKEY In these past three years, Phono Del Sol has built itself up into a tastemaker midsummer’s indie music fest — and it’s one to watch. It makes sense: the one-day fest is curated by on-the-pulse local blog, the Bay Bridged.

And beyond the interesting (and mostly local) band choices — the first year featured Aesop Rock and Mirah, last year the Fresh and Onlys and Mwahaha, and this year Thee Oh Sees, YACHT, Bleached, and K. Flay will headline — there’s something about the approach and atmosphere that calms the nerves.

It’s in the Mission’s Potrero Del Sol park, a hilly, grassy area bordered by an active skate park. During the fest, skaters whizz by near the bands, and street food vendors offer salty snacks on the other side of the stage.

The event tends to inhabit a particular San Francisco garage scene vibe of yesteryear, apart from current complications brewing in the nearby neighborhood between the old and new, the tech workers and SF lifers.

One of the newest bands on this year’s bill fits this feeling as well, the young garage pop four-piece Cool Ghouls. The psych-inflected group is relaxed and gracious, perhaps not yet jaded by the outlying music community or industry. And they’ll be bringing a horn section to Phono Del Sol this year. (Sat/13, 11:30am-7pm, $20. Potrero Del Sol Park, 25th Street at Utah, SF. www.phonodelsol.com).

Cool Ghouls, named after a phrase George Clinton used in a Parliament Funkadelic concert film, are a bit giggly during our conversation from lead guitarist Ryan Wong’s Duboce Park area apartment. They seem new to this whole recognition thing, and thusly, speak candidly, and nearly in circles. Singer Pat McDonald, bassist Pat Thomas, and Wong all grew up in the Bay Area, attending high school in Benicia together, and met up again in San Francisco after college. Alex Fleshman met the others when he went to San Francisco State University.

They formed in early 2011 and began playing shows almost immediately — in early spring of that year, showing up at brick-and-mortar spots, house shows, even Serra Bowl before it closed, and at Noise Pop. That’s where they first crossed my path, as they began popping up at shows on a frequent basis. “Now, we’re being asked to play more local shows then we can play,” Thomas says. “Pat McDonald seems to know a lot of people somehow, maybe it’s his hair? Or he’s just like, really nice.”

Their self-titled debut full-length, recorded by Tim Cohen of Fresh and Onlys and Magic Trick, saw release this April on Empty Cellar Records. “We thought we could record a whole album by ourselves, so we recorded 90 percent of it on an eight-track recorder,” Wong says. “We showed Arvel [Hernandez], who runs Empty Cellar Records…he told us ‘the songs are really good but the recording is just shitty.'”

He enlisted Cohen to record it, and said he’d release it on Empty Cellar. They were ecstatic with the revelation, and excited to work with the talented Cohen. They spent a few days in his Western Addition home, rerecording the full album while crammed in Cohen’s bedroom at the top of a towering Victorian near Alamo Square.

Cohen’s since become a de facto advocate for the band, writing a glowing press release about Cool Ghouls and the album, in which he defiantly explains “First things first: Cool Ghouls are not a retro act… Truth be told, this being their first official release, they may even be a bit naïve in their dogged pursuit of the true-blue, home-spun, rock and roll lifestyle.”

Though he later concedes, “If one were to ascribe to them a ’60s-reverent description, as one often does in the case of San Francisco bands, one would most likely find an artistic kinship with some of the most inimitable, idiosyncratic, yet unmistakably influential bands of the retro-fitting oeuvre. The Troggs, The Monks, Sir Douglas Quintet come to mind immediately. (Save your Kinks and Rolling Stones references.) Like the aforementioned, the Ghouls are natural heirs to the folkloric lineage which precedes them, adding dashes of weirdness where needed.”

The group laughs when I bring up the Cohen praise, “it’s so funny things people take away from press releases…but he did a really good job of writing that, I didn’t even know he understood us that well,” Thomas says. “He doesn’t give you that much in person, he’s a pretty stoic guy, so it’s been really cool to see that through all of that, he was digging us.”

“We were all kind of intimidated, then that came out, and I didn’t have any idea he was even writing anything,” Wong adds.

The Ghouls are democratic, and all are multi-instrumentalists, with each group member writing songs and bringing the skeletons to the group to flesh out. And many of the tracks on the album do evoke that garage pop weirdness Cohen identified, and also a casual self-awareness.

Thomas wrote joyful first single “Natural Life” quickly and brought it to the band. The perfectly corresponding video by his film student brother Rob Thomas features the band frolicking in the Marin Headlands and Sutro Baths. “That whole organic approach, natural approach, putting your pieces in place and then just winging it, is something that we generally do — it keeps it collaborative,” Thomas says.

Another standout, is mid-tempo “Witches Game,” which singer McDonald wrote, starting with the fuzzy guitar riff that rides strong through the track.

Woozy, surfy “Grace” was one of the first songs they ever played together, and usually closes out their live sets. And they agree that jangly psych-pop “Queen Sophie” was one of the more collaborative songs. There’ll be a proper video for that one out soon too.

“The whole album was a group effort. I think of it as a specific piece of where we were at when we recorded it,” Wong says.

The album artwork is worth noting as well, a collage-painting made by Thomas with a big glittery sun, swirly watercolor images of clouds, snowy mountaintops, red-yellow fire, and a colorful rooster. The images weren’t meant necessarily to reflect the songs on the album, but ended up having some meaning after the fact.

“I was just trying to represent what I lean toward anyway, like if it’s a painting I make, it’ll probably evoke the music I make, just because I’m making both of them,” Thomas says. “But liked the rooster image because I was thinking about the way roosters strut, and this is our first album.”

Wong pipes up, “I feel the way the album is with these songs, [it’s about] the morning, and the ideas of the natural life. It’s appropriate because it’s our first album, but maybe I’m looking too much into it?”

Fillmore District-raised emcee DaVinci plays this free show alongside fellow burgeoning local rap duo Main Attrakionz, Young Gully, Shady Blaze, Ammbush, and Sayknowledge. DaVinci has been releasing tracks for a few years, in late 2012 dropping full-length The MOEna Lisa with an ode to SF in track “In My City” with the telling lyric, “Trying to push us out of the city/but we ain’t leaving,” in a hoarse whisper, but also referencing favorite spots like the waffle house at Fillmore and Eddy (Gussies).

The elegant yet spooky old-world-carnival act Japonize Elephants — noted for drawing sounds from eclectic styles like gypsy jazz, bluegrass, and klezmer — will celebrate the vinyl release party for newest album Mélodie fantastique, this week at Amnesia. Go, and witness all the instrumentation you can handle (fiddle, banjo, glockenspiel, vibraphone, accordion, percussion, surf guitar), along with four-part vocal harmonies. A group of waltzing ghosts, like the ones you find on the Haunted Mansion ride, wouldn’t seem out of place here.