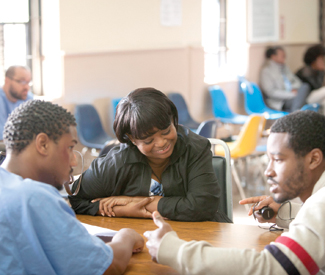 FILM By now you’ve heard of Fruitvale Station, the debut feature from Oakland-born filmmaker Ryan Coogler. With a cast that includes Academy Award winner Octavia Spencer and rising star Michael B. Jordan (The Wire, Friday Night Lights), the film premiered at the 2013 Sundance Film Festival, winning both the Audience Award and the Grand Jury Prize en route to being scooped up for distribition by the Weinstein Company. A few months later, Coogler, a USC film school grad who just turned 27, won Best First Film at Cannes.

Accolades are nice, especially when paired with a massive PR push from a studio known for bringing home little gold men. But particularly in the Bay Area, the true story behind Fruitvale Station eclipses even the most glowing pre-release hype. The film opens with real footage captured by cell phones the night 22-year-old Oscar Grant was shot in the back by BART police, a tragedy that inspired multiple protests and grabbed national headlines. With its grim ending already revealed, Fruitvale Station backtracks to chart Oscar’s final hours, with a deeper flashback or two fleshing out the troubled past he was trying to overcome.

Mostly, though, Fruitvale Station is very much a day in the life, with Oscar (Jordan, in a nuanced performance) dropping off his girlfriend at work, picking up supplies for a birthday party, texting friends about New Year’s Eve plans, and deciding not to follow through on a drug sale. Inevitably, much of what transpires is weighted with extra meaning — Oscar’s mother (Spencer) advising him to “just take the train” to San Francisco that night; Oscar’s tender interactions with his young daughter; the death of a friendly stray dog, hit by a car as BART thunders overhead. It’s a powerful, stripped-down portrait that belies Coogler’s rookie-filmmaker status.

San Francisco Bay Guardian How was the screening at the Grand Lake?

Ryan Coogler It was intense! Pretty much everybody at the screening had a stake in the film and the story: being from the Bay Area, being there when [Grant’s death] happened, being a member of Oscar’s family, being an employee of BART or a law enforcement officer, being a member of my family, or being someone who opened up their home or business to our film. Everybody was there under one roof, you know? In many ways, we wanted our film to be something that brought people together — and that screening was a personification of that.

SFBG The film doesn’t make Oscar out to be a saint; rather, it shows that he was a real human who’d made some serious mistakes. Were you careful to portray him that way?

RC Absolutely. We set out to examine him through the lens of his relationships with the people who knew him best. I think that’s often what’s not looked at, in terms of tragedies that get politicized like this: people forget that this guy was a person who mattered to specific people — and he couldn’t make it home to those people. When you know somebody intimately, you know their good qualities and their faults. You know their flaws firsthand, and [their behavior] affects you firsthand. I think it would have been a mistake not to look at the things he was struggling with in his life.

SFBG You were born in 1986, the same year as Oscar, and you’re both from the East Bay. Were there other things that drew you to his story?

RC Those commonalities were a major factor. But young people like Oscar Grant’s lives are lost constantly over violence, and I was really interested in exploring why it happens, and why people shouldn’t be OK with it.

Oscar was the kind of person who is often marginalized, both in the media and in fiction films. I thought that giving his story this type of personal perspective could be eye-opening for people that wouldn’t get to know a character like him in their own lives. So that’s what really drew me to it — to add a perspective that might promote some healing and some growth.

SFBG What was the reaction when members of Oscar’s community found out you were making the film?

RC The Bay Area is culturally diverse, but it’s also diverse as far as opinions go. Obviously, there were people on both sides of the fence, since this was a complicated situation. Some people were glad the story was being told; others were like, “That story doesn’t deserve to be told.” There were also a lot of opinions between those two ends of the spectrum. But overwhelmingly, the community supported the film in many ways, especially when they found out the approach we were taking.

SFBG Did you ever consider making the BART cops full-fledged characters, or did you always plan to just focus on Oscar?

RC I decided from the beginning that Oscar would be the focal point of the story. That was the type of film that I wanted to make, and that was the one perspective that I felt wasn’t really heard — because he’s not around to speak anymore. In terms of filmmaking, it was really a creative choice. You have these types of films that follow one character around, and we really wanted to follow Oscar and see how other characters bump off of him. In the scope of his day, the cops were only involved for a very small amount of time.

SFBG BART itself is almost a character in the film. It’s something that non-locals might not pick up on, but Bay Area residents will be able to tell how carefully you chose your locations to include it in the background.