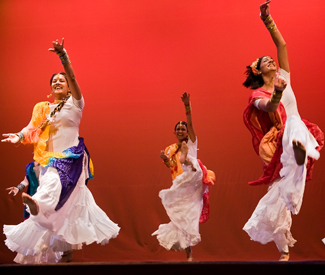 SUPER EGO Few things light up our nightlife scene like the whirling, clapping, shouting, laughing, dhol-drum-driven monthly bonanza that is Non Stop Bhangra. The recent influx of Indian arrivals, mostly due to tech-related jobs, has given Bay Area culture a nice, bright kick in the pakoras — we were already home to a flourishing Indian community, too — and the eight-year-old NSB monthly party is a welcome wagon everyone can hop on.

This month’s installment’s a special one, with an early screening (before 10pm) of Non Stop Bhangra documentary footage by filmmaker Odell Hussy. Three years in the making, the doc promises an intimate look inside one of SF’s night-time treasures. And after that: dancing, dancing, and more dancing. (Lessons at 9:30pm, y’all.)

The Ritual bass crew’s weekly Thursday parties, now at Mighty, are pretty damned great — especially when they’re reconnecting with their lowdown influences. Like, say, seminal Ninja Tune ripper Blockhead, whose 2004 disc Music by Cavelight was a prophetic reanimation of trip-hop, pitch-shifted vocals and all.

Honestly one of may favorite annual all-ages parties. Celebrate Bastille Day with cool cats and kittens into French pop ditties, with a special emphasis on the swingin’ ’60s of Serge Gainsbourg and the pre-hateful Miss Bardot herself. DJs Pink Frankenstein, Brother Grimm, and Cali Kid get you in le groove. Plus! Free ’60s hairstyling by Peter Thomas Hair design from 9-11pm, oh mon dieu.

LA space-bass new school, post-trap funkmaster Taurus Scott of LA burns up the decks at this new monthly joint, which prides itself on downtown grittiness and fly style. (Traci P from Sisterz of the Underground puts it on, so you know the bonafides are in order.)

I am digging mysterious new party promotion entity Isis. Who else would start a press release for an appearance by DC disco re-edit/acid-jack prince Jacques Renault with “Mighty mother, daughter of the Nile, we rejoice as you join us with the rays of the sun.” This party should be equally as supernatural.