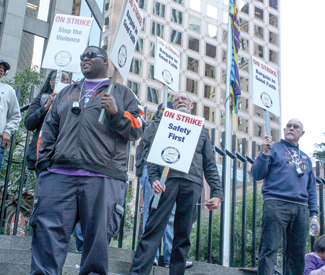 Last week’s four-day strike by Bay Area Rapid Transit workers dominated the news and made headlines around the country, marking the latest battleground in a national war between public employee unions and the austerity agenda pushed by conservatives and neoliberals.

Of course, that wasn’t how the conflict was framed by BART, most journalists, or even the two BART unions involved, all of whom dutifully reported the details of each sides’ offers and counter-offers, the competing “safety” narratives (new security procedures demands by unions versus spending more on capital improvements than raises), and the strike’s impact on commuters and the local economy.

But once this long-simmering labor standoff seized the attention of a public heavily reliant on BART, fueling the popular anger and resentment increasingly directed at public employee unions in recent years, familiar basic storylines emerged.

At that point, the Bay Area could have been placed in Wisconsin, Ohio, Michigan, or Illinois — the most recent high-profile labor union battlegrounds, with their narratives of greedy public employees clinging to their fully funded pensions and higher than average salaries while the rest of us suffer through this stubbornly lingering hangover from the Great Recession.

Around water coolers and online message boards, there were common refrains: How dare those unions demand the raises that the rest of us are being denied! Pensions? Who has fully funded pensions anymore? Why can’t they just be more realistic?

When Bay Area residents were finally forced to find other ways of getting around, within a transportation system that is already at the breaking point during peak hours thanks to years of austerity budgets and under-investment in basic infrastructure, those seething resentments exploded into outright anger.

And those political dynamics could only get worse in a month. The BART strike could resume full strength on a non-holiday workweek if the two sides aren’t able to come to an agreement before the recently extended contract expires.

This is the Bay Area’s most visible and impactful labor standoff, and it could prove to be a pivotal one for the modern American labor movement.

Chris Daly was a clarion voice for progressive values while serving on the San Francisco Board of Supervisors from 2000-2010. Now, as political director of Service Employee International Union Local 1021, one of the BART unions, he says this standoff is about more than just the issues being discussed at the bargaining table.

“The terms and conditions of workers in the public sector is a buoy for other workers,” Daly told us, explaining how everyone’s wages and benefits tend to follow the gains and setbacks negotiated by unions. “The right understands this, which is why the right has been mercilessly attacking public sector workers.”

Ken Jacobs, chair of the UC Berkeley Labor Center, confirmed that union contracts affect the overall labor market. “When unions improve wages and benefits, it does have a ripple effect,” Jacobs said. He agreed that the outcome at BART could be a bellwether for the question, “As the economy comes back, how much will workers share in that prosperity?”

Demonizing public sector workers as greedy or lazy also serves to undercut the entire labor movement, Daly said, considering that public employees make up a far higher percentage of union members than their private sector counterparts. And during election time, it is union money and ground troops that typically contest wealthy individuals and corporations’ efforts to maintain or expand power.

“Labor is one of the main checks on unbridled corporate power, and public sector unions are the backbone of labor,” Daly told us.

So in that context, BART’s battle is about more than just the wages and benefits of train drivers and station agents, with their average base salary of $62,000, just barely above the area median income, and their demand for raises after accepting wage freezes in recent years.

Daly sees this as part of a much broader political standoff, and he said there are indications that BART management also sees it that way, starting with the $399,000 the transit agency is paying its lead negotiator Thomas Hock, a veteran of union-busting standoffs around the country.

“He has a history of bargaining toward strikes, with the goal of breaking unions,” Daly said, noting that Hock’s opening offer would have taken money from BART employees, with new pension and healthcare contributions outweighing raises. “It was a takeaway proposal when you add it up, while they have a $100 million surplus in their budget and the cost of living in the Bay Area is shooting up.”

But BART spokesperson Rick Rice told us that Hock is simply trying to get the best deal possible for this taxpayer-funded agency, and he denied there is any intention to break the union or connection to some larger anti-worker agenda.

“There is definitely a need to start funding the capital needs of the district,” Rice told us. “I don’t see that we’re pushing an austerity agenda as much as a realistic agenda.”

But Daly said the very idea that austerity measures are “realistic” excuses the banks and other powerful players whose reckless pursuit of profits caused the financial meltdown of 2008. The underlying expectation is that workers should continue to pay for that debacle, rather than bouncing back with the rebounding economy.

“They get in this austerity mindset, and we see it in every contract we’re negotiating,” Daly said, noting that capital needs and benefits have always needed funding, despite their elevation now as immediate imperatives. “You have good people with good intentions like [BART Board President] Tom Radulovich pushing this austerity mindset.”

Radulovich, a longtime progressive activist, told us he agrees with some of how Daly is framing the standoff, but not all of it. He said that BART is being squeezed into its position by unique factors.

Radulovich said that healthcare and pension costs really are rising faster then ever, creating a challenge in maintaining those benefit levels. And he said that Hock isn’t simply carrying out some larger anti-union agenda. “He’s negotiating what the district wants him to negotiate,” he said.

Radulovich said that while BART’s workers may deserve raises, most of BART’s revenues come from fares. “So it’s taking from workers to give to other workers,” Radulovich said. “It’s a little more complicated because it is a public agency and Chris is aware of that.”

Yet Radulovich acknowledged that BART has opted to pursue an aggressive expansion policy that is diverting both capital and operating expenditures into new lines — such as the East Contra Costa, Oakland Airport, and Warm Springs extensions now underway — rather than setting some of that money aside for workers.

“And for a lot of those, we were being cheered on by the [San Francisco] Labor Council, one of many ironies,” said Radulovich, who favors infill projects over new extensions. “These are some of the conversations I’ve had with labor leaders in the last few weeks, how we think strategically about these things.”

But if BART wanted to defeat the union, it may have miscalculated the level of worker discontent with austerity measures.

“What they didn’t plan on is some high-level Bay Area political pressure,” Daly said, referring to the local uproar over the strike that led Gov. Jerry Brown to send in the state’s two top mediators, who made progress and created a one month cooling off period before the strike can resume.

One of the hardest issues to overcome in the court of public opinion may be the fully funded pensions of BART employees. “Times are changing, costs are escalating rapidly, and we’re asking for a modest contribution,” Rice said of BART’s demand that employees help fund their pensions.

Daly acknowledges the resentments about the pension issue, even though it was essentially a trap set for public employee unions back in the 1980s, when BART and other public agencies were the ones offering to pay for employee pensions in lieu of raises.

But rather than resenting public employees for having pensions, he said the public should be asking why most workers don’t have retirement security and how to fix that problem.

“At what point do we organize and demand retirement security for all workers?” Daly said, noting that SEIU is now leading that fight on behalf of all workers, not just its members. “What we ought to be talking about is how we restore the social contract.”

Jacobs confirmed that SEIU has indeed been pushing the retirement security issue at the state and federal levels. And it’s a crucial issue, he said, noting that just 45 percent of workers have pensions and that the average retirement savings is just $12,000.

“The retirement problem we have is not the pension crisis, it is the lack of pensions crisis,” Jacobs said.

That’s one reason that he said this standoff has implications that extend far beyond the Bay Area.

“The fight goes beyond these particular workers,” Jacobs said. “It’s an important set of negotiations and an important strike in terms of looking at what happens in this country as the economy improves.”

Daly agrees there’s a lot at stake, for more than just his members.

“Losing on this means we’d be hard pressed to win elsewhere, anytime,” Daly said. “It is important symbolically, and it is important to the strength and morale of the movement.”