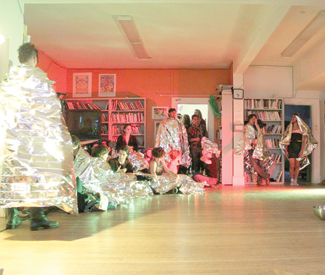 THEATER/DANCE The crowd outside the Niebyl-Proctor Marxist Library in Oakland was hopping. Fidgeting, really — imperceptibly at first, but soon enough bodies were bouncing and flailing, until the scrum of dancers packed shoulder-to-front-to-back on the sidewalk morphed their collective way through the front door.

June 22 marked one year’s worth of PPP, the monthly performance series instigated by Oakland-based dance collective SALTA. As much a scene as a performance platform, PPP has been building an ethic of serious, unbridled experimentation in a low-key setting where failure is as valid as success, and no one ever encounters a price tag, a door charge, or a gate keeper.

In terms of curation, PPP is equally promiscuous and shrewd, emphasizing a cross-generational perspective. “We try to reach out to people who have paved pathways for us,” says one SALTA member. “And we’ve been a little brazen about cold-emailing, cold-calling people who are in town, like Jeremy Wade.” Meanwhile, PPP has been building a unique audience for contemporary dance-performance and inspiring dialogue about the ethics of art-making in the Bay Area.

As an attribute of its headlong dive into experimentation and openness, PPP never sits still but moves restlessly and freely from one donated space to another. With each space come new networks as well as many PPP diehards. As its members explain, the anniversary installment marked the beginning of a summer hiatus for PPP, so that the collective can better focus on advancing other projects — all geared to creating space, in the widest sense, for dance in Oakland.

SALTA is very much the restive and searching reflection of its monthly series. What began as necessity — a space for dance — has been embraced as ethic. Not that the two were entirely strangers to begin with. As suggested by the conversation below with the members of SALTA (currently seven young women who preferred to speak as members of the collective rather than use their individual names), the realities of dance today imply, more than ever, a confrontation with the values of the dominant culture.

SFBG Which came first, PPP or SALTA, and what’s the relationship?

SALTA It’s funny, we were just talking about this earlier — it’s so confusing!

SALTA I guess we, as a collective, came first.

SALTA And we named that SALTA.

SALTA But the name SALTA didn’t come until after we had the name PPP.

SALTA We all came together in the idea of making space for dance. We were talking a lot about having an actual space and, in the meantime, [we said] let’s do a performance series. So that came second, and then it eclipsed a lot of what we’d been doing. We’re actually going to take a break over the summer and focus on some other stuff.

SALTA We want to have classes, [and start] a dance publication. We want to work on networking. We’ve had some out of town people, but just because the West Coast can be very isolating.

SFBG How did it all start?

SALTA We’re all based in Oakland, and we wanted to have a space for dance to happen here — there are not a lot of venues that are really open for experimental work. That was the big thing: we’re sick of going to San Francisco all the time, and we want to figure out what the community is in Oakland and see what we can build. Something that’s been really cool from the beginning is that a lot of non-dancers come to PPP, a lot of Oakland people who hear about it from different arenas.

SALTA As well as there not being institutions interested in the kind of work we were doing, we were also not interested in institutionalizing art, in the way that it’s done. Also, financially, making it a free event was really important to us as artists and the way we want to make art. Not having to play this whole [“who do you know”] game. It was modeled, or got a lot of guidance from Jmy [Leary] in LA, who started [dance organizers/activists] AUNTS in New York. That’s been a model that we’ve been in dialogue with.

SALTA She’s a mentor of ours, and a benefactor actually, through the Yellow House fund. We originally wanted to create a space here in Oakland similar to Pieter Pasd in LA, but the realities of being who we are as artists and where we are in our lives, as transient people, we thought we’d keep the space moving. We figured out that that worked over the past year.

SFBG I like this ethic of moving around, of asking for a free space each time. It seems a good social ethic to encourage, and it really pushes back against the spirit of the times.

SALTA It’s interesting who said no to the proposal, and who has been really willing to donate space and time — and their art.

SALTA I feel as we continue to exist and assert ourselves into spaces, it opens up more. We have to find a space, ask for a free space, because as dancers we don’t have the resources to be renting all the time. So where there’s this huge scene of First Friday or whatever — “art’s happening all the time in Oakland” — we’re not a part of that. It would be interesting at some point. Well, we WILL be a part of that. [Laughter.] But what does that mean? And how much more legit, in a certain sense, do we have to become? *

For a longer version of this interview, visit www.sfbg.com/pixel_vision; for more information on SALTA, visit www.saltadance.info.