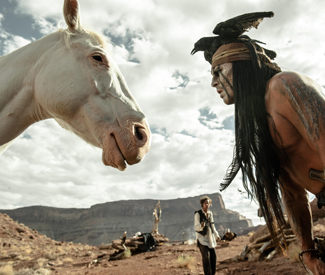 That last title is of particular interest lately. Not only did Charlie provide grim confirmation that a post-Planet of the Apes (2001) Tim Burton had squandered whatever goodwill he’d built up a decade prior with films like Ed Wood (1994) and Edward Scissorhands (1990), it also telegraphed to the world that Johnny Depp — previously a highly intriguing actor, someone whose cool cred was never in question — was capable of sucking. Hard.

In the years since 2005, Depp hasn’t done much to stamp out those initial flickers of doubt. If anything, he’s fanned ’em into a bonfire. His involvement in the Pirates of the Caribbean franchise (which is plodding toward a fifth installment) has taken up most of his schedule, though he’s always willing to don a wacky wig whenever Burton needs him (2007’s Sweeney Todd; 2010’s Alice in Wonderland; 2012’s Dark Shadows). The rest of his post-2005 credits are a mixed bag, mostly best forgotten (ahem, 2010’s The Tourist), though one does stand out for positive reasons: 2011’s animated Rango, a cleverly-scripted tale that reunited Depp with Gore Verbinski, who helmed the first three Pirates movies.

The pair returns to Rango‘s Wild West milieu for The Lone Ranger; certainly there’ll be no Oscars handed out this time, though Razzies seem inevitable. The biggest strike against The Lone Ranger is one you’ll read about in every review: it’s just a teeny bit racist. The casting of the once and future Cap’n Sparrow — who apparently has a blank check at Disney to do any zany thing he wants — as a Native American given to “hey-ya” chants and dead-bird hats is very suspect. Some (white) people might be willing to give this a pass, because it’s always been part of Depp’s celebrity mythology that he’s part Indian. I mean, he totally has a Cherokee warrior inked on his bicep, just below “Wino Forever”!

Mmm-hmm. Let’s go to the source, shall we? Speaking of his heritage in a 2011 interview with Entertainment Weekly, Depp mustered the following: “I guess I have some Native American somewhere down the line. My great grandmother was quite a bit of Native American, she grew up Cherokee or maybe Creek Indian. Makes sense in terms of coming from Kentucky, which is rife with Cherokee and Creek.”

Sounds kinda sketchy, JD. The actor who played Tonto on TV may have been born Harold J. Smith (“Jay Silverheels” was his nom de screen), but he was also raised on Canada’s Six Nations reserve and was the son of a Mohawk tribal chief. So The Lone Ranger TV series, which ran from 1949 to 1957 — and had its share of racial-insensitivity and stereotype-perpetuating issues — was able to cast an actual indigenous person to play Tonto, but 2013’s The Lone Ranger, which elevates Tonto from sidekick to narrator and de facto main character, was not.

In fact, it’s not too far-fetched to assume that the casting of Depp (also credited as an executive producer) is the only reason this Lone Ranger exists. Clearly, he really wanted to play Tonto, and Depp has a way of making his performance the most important thing about whatever film he’s in. Were audiences really screaming out for The Lone Ranger, a rather literal big-screen take on a 1950s TV show with some heavily CG’d train chases added in? Could not $250 million, the film’s reported budget, have been better spent doing something … anything … else?

Obviously “redface” is nothing new in Hollywood. It was frequently deployed in the pre-PC era, as when a white actor played a heroic Native American figure — think Chuck Connors in 1962’s Geronimo. But shouldn’t we have transcended that by now? You’d never see blackface in a film unless it was being used to make a character look ridiculous (2008’s Tropic Thunder), or to make a satirical point, as with 2000’s Bamboozled. Somewhere, Kevin Costner is clutching his Oscars for 1990 post-Western Dances With Wolves — more or less cinema’s biggest mea culpa for all those “the only good Indian is a dead Indian” yarns of the John Wayne era — and weeping.

Tonto isn’t the only Native American character in The Lone Ranger. But the others (none of whom are given names, unless someone was called “set dressing” or “background actor” and I missed it) have a slightly sharper aura of authenticity than Depp, who spends the whole movie caked in either old-age make-up or campy face paint. They are mere plot devices, there to give contemporary audiences a reason to feel outraged when an evil railroad baron lays his tracks through their land and raids their silver mine. “Our time has passed,” an elderly Indian character tells the Lone Ranger (Armie Hammer, whose role literally consists of riding a horse and reacting to Depp’s scenery-chewing buffoonery). “We are already ghosts.”

But back up, kemo sabe. Racism may be The Lone Ranger‘s worst problem, but it’s not the film’s only problem. There’s also its bloated length (nearly three hours); its score, which dares to introduce an Ennio Morricone homage into a film Sergio Leone wouldn’t line his gatto‘s litter box with; its waste of some great character actors (Barry Pepper, William Fichtner); its assumption that having random characters ask the Lone Ranger “What’s with the mask?” over and over is the funniest joke ever; and its failure to follow through on its few inventive elements — that herd of Monty Python-inspired rabbits, for example.

And another thing: if the moral of The Lone Ranger — spelled out with all the delicate subtlety of a fiery train crash — is “greed is bad,” why did El Deppo sign onto this piece of crap in the first place? *