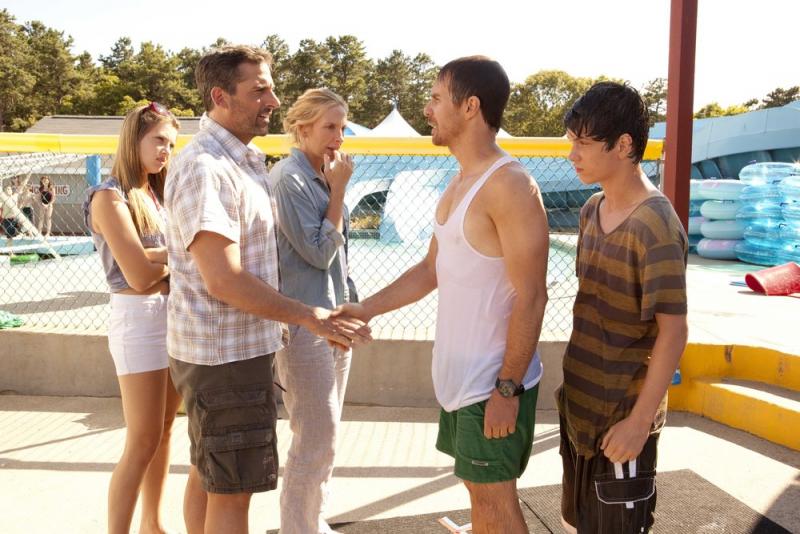 By now you’ve heard how much The Lone Ranger sucks (for more on that, my review here), so what else should you be spending your weekly movie-theater budget on? Well, the Roxie just opened a doc about Detroit band Death (Dennis Harvey breaks it down here), plus there’s a new Pedro Almodóvar joint, a coming-of-age summer flick starring Sam Rockwell and Steve Carell as cool and not-so-cool father figures, and (since one Carell movie ain’t enough) Despicable Me 2  — just the thing for the kidz who’ve already seen Monsters University.

Read on for our takes on these films, and more!
http://www.youtube.com/watch?v=irSSZumpYS4

Augustine When a 19-year-old Parisian kitchen maid (single-named French musician Soko) has a dramatic seizure during dinner service, she makes for Salpêtrière Hospital, where she becomes the superstar patient of Dr. Charcot (Vincent Lindon) — a real-life 19th century professor and neurologist who later mentored Sigmund Freud. There’s no “talking cure” at work here, though; Augustine’s medical treatment consists mostly of naked poking and prodding, as well as hypnosis-induced episodes of her increasingly sexualized “ovarian hysteria.” The tension builds as Charcot struggles against popular disdain for his methods (read aloud to him from newspapers by his coolly elegant wife), as well as his forbidden attraction to Augustine. Occupying the same moody, sensual milieu as David Cronenberg’s too-talky A Dangerous Method (2011), first-time feature writer-director Alice Winocour approaches her tale of misunderstood madness from a point of view that’s more emotionally-driven, with some subtle feminist undercurrents. Points deducted, though, for some obvious symbolism — like costuming Augustine in a brand-new red dress right after she starts her period for the first time. (1:42) (Cheryl Eddy)

Deceptive Practice: The Mysteries and Mentors of Ricky Jay David Mamet fans will recognize Ricky Jay from multiple appearances in the director’s work; he’s also been in films like Boogie Nights and Tomorrow Never Dies (both 1997). But Jay’s true passion is stage magic, specifically card and other sleight-of-hand tricks, performed with a skill so dazzling that it’s tempting to believe he really does have supernatural powers. He’s also a witty, self-deprecating, and sometimes “irascible” (to quote a word used in Molly Bernstein and Alan Edelstein’s doc) character — and has a vast, ever-expanding interest in magic history. Using first-hand interviews, TV and stage-show clips, and some wonderful vintage footage, Deceptive Practice traces Jay’s career (he was a child prodigy in the 1950s, thanks to his supportive grandfather), pausing along the way to pay tribute to the men who influenced him and, in many cases, taught him their top-secret techniques. Throughout, Jay is seen demonstrating his own mind-bending tricks — as “simple” as changing a card’s suit, as elaborate as making it sail across the room and plunge like a knife into a watermelon rind — although never, of course, revealing how he does it. (1:28) (Cheryl Eddy)

Despicable Me 2 The laughs come quick and sweet now that Gru (Steve Carell) has abandoned his super-villainy to become a dad and “legitimate businessman” — though he still applies world-class gravitas to everyday events. (His daughter’s overproduced birthday party is a riot of medieval festoonage.) But like all the best reformed baddies, the Feds, or in this case the Anti-Villain League, recruit him to uncover the next international arch-nemesis. Now a spy, he gets a goofy but highly competent partner (Kristen Wiig) and a cupcake shop at the mall to facilitate sniffing out the criminal. This sequel surpasses the original in charm, cleverness, and general lovability, and it’s not just because they upped the number of minion-related gags, or because Wiig joined the cast; she ultimately gets the short end of the stick as the latecomer love-interest (her spy gadgets are also just so-so). However, Carell kills it as Gru 2 — his faux-Russian accent and awkward timing are more lived-in. Maybe the jokes are about more familiar stuff (like the niggling disappointments of family life) but they’re also sharper and more surprising. And though the minions seemed like one-trick ponies in the first film, those gibberish-talking jellybeans outdo themselves in the sequel’s climax. (1:38) (Sara Maria Vizcarrondo)

I’m So Excited I’m So Excited may be to Pedro Almodóvar what Hairspray (1988) was for director John Waters: a kind of low-intensity, high-fluff gateway drug for a filmmaker who’s otherwise an “acquired taste.” (Note: unlike Hairspray, this is not a family movie.) Almodóvar’s previous pictures were far more explicit about their obsessive thinking: mothers suffered (1999’s All About My Mother); sex was deadly (1990’s Tie Me Up! Tie Me Down!) and men were dishonorable (all of them). But in this drug and booze-addled flame-fest, Almodóvar takes one of his lesser themes (the joy of confinement) and transforms a flight from Madrid to Mexico into the funniest soap opera to ever feature cabaret and S&M talk. Early in the flight we learn the landing gear is shot; this means the flight’s dueling pilots have to find a place to host an emergency landing while Europe is on holiday. They anesthetize all of coach (um…metaphor, anyone?), leaving the rich to bellyache over their lost children, lost happiness, and stubborn virginity. Business class is full of drama queens so the flamboyantly gay attendants spike a cocktail with ecstasy (to make everyone get along) and an orgy ensues, complete with a seemingly victimless rape and multiple change-overs from hetero to homo. Almodóvar does have a knack for make-believe, but his biggest gift for fantasy happens in his stress-free transitions; oh, that coming out could be so liberating — but living in a Catholic country lousy with sexual disorientations, maybe the only place that can happen is at 30,000 feet. (1:35) (Sara Maria Vizcarrondo)

Kevin Hart: Let Me Explain The comedian (2012’s Think Like a Man) performs in this concert film, shot at Madison Square Garden during his 2012 stand-up tour. (1:15)

Maniac And it came to pass that William Lustig’s trashy classic Maniac (1980) was remade, with Elijah Wood assuming the role of twisted killer Frank, a role closely associated with its originator, the late, great cult actor Joe Spinell. Lustig is credited with a producing credit on this otherwise largely French effort, directed by Franck Khalfoun and co-written by Alejandre Aja and Grégory Levasseur — who also worked together on the 2006 remake of The Hills Have Eyes. Though it’s set in contemporary Los Angeles (complete with dating websites and cell phones), Maniac is shot to mimic the original film’s late-1970s New York (cabs, deserted subways, grimy streetscapes), with a synth-heavy score enhancing the retro vibe. Frank is still obsessed with mannequins, scalps, and his dead mother, with shades of both Psycho (1960) and The Silence of the Lambs (1991) filtering through. When Frank meets Anna (Nora Arnezeder), a beautiful French photographer whose preferred subject is mannequins, he grows ever more confused — and more violent. The entire movie is shot from Frank’s POV (we see Wood’s face only in mirrors and photographs), an off-putting gimmick that fails to add much in the way of suspense or scares. As for the gore, there’s nothing amid the CG enhancements that matches the work of special effects genius Tom Savini, whose memorable exploding-head scene plays just as repulsively effective in 2013 as it did in 1980. If you really wanna be freaked out by a movie maniac, skip this so-so do-over and spend some quality time with Spinell instead. (1:29) Roxie. (Cheryl Eddy)

The Way, Way Back Duncan (Liam James) is 14, and if you remember being that age you remember the awkwardness, the ambivalence, and the confusion that went along with it. Duncan’s mother (Toni Collette) takes him along for an “important summer” with her jerky boyfriend, Trent (Steve Carell) — and despite being the least important guy at the summer cottage, Duncan’s only marginally sympathetic. Most every actor surrounding him plays against type (Rob Corddry is an unfunny, whipped husband; Allison Janney is a drunk, desperate divorcee), and since the cast is a cattle call for anyone with indie cred, you’ll wonder why they’re grouped for such a dull movie. Writer-directors Nat Faxon and Jim Rash previously wrote the Oscar-winning screenplay for 2011’s The Descendants, but The Way, Way Back doesn’t match that film’s caliber of intelligent, dry wit. Cast members take turns resuscitating the movie, but only Sam Rockwell saves the day, at least during the scenes he’s in. Playing another lovable loser, Rockwell’s Owen dropped out of life and into a pattern of house painting and water-park management in the fashion of a conscientious objector. Owen is antithetical to Trent’s crappy example of manhood, and raises his water wing to let Duncan in. The short stint Duncan has working at Water Wizz is a blossoming that leads to a minor romance (with AnnaSophia Robb) and a major confrontation with Trent, some of which is affecting, but none of which will help you remember the movie after credits roll. (1:42) (Sara Maria Vizcarrondo)