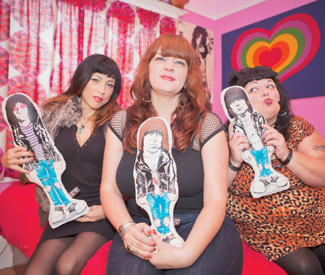 MUSIC During high school one day in a sleepy Marin County enclave, Tina “Boom Boom” Lucchesi went to a local record shop where Erik Meade of Jackson Saints and the Pukes worked, and he put on a Redd Kross album. “Total obsession,” Lucchesi says now, a few decades later, from her punky, vintage-filled Peewee’s Playhouse home in Oakland. “He was playing the Teen Babes from Monsanto record, and I was like, I’m going to buy that — and I did.”

This year, for the first time, it’s all outdoors, and the headliners are impressive: Redd Kross, Jonathan Richman, the Zeroes, the Oblivions, Fuzz, the Trashwomen. The rest of the lineup is too, including Audacity, Mean Jeans, Shannon and the Clams, Mikal Cronin, Guantanamo Baywatch, and more.

The Trashwomen immediately stuck out in the stellar lineup, mostly because the other groups are all active bands. The Trashwomen haven’t played together in four years (during a brief reunion for Budget Rock in ’08), and before that, they’d been broken up since ’97. So why now?

For Total Trash’s Marc Ribak, the choice was obvious. “In the Total Trash babe bible, Trashwomen rank number one!”

But for said babes, it was all about Redd Kross. “Redd Kross is playing! We’re all big fans, so we were like,’we’ve got to do it!'” says drummer Lucchesi, sitting on a teal patterned couch in her home next to bassist Danielle “Lead Pedal” Pimm, and guitarist Elka “Kitten Kaboodle” Zolot.

“We’ve gotten a lot of offers, but we all have busy lives. There was a time when we were doing it but then you know, it kind of fizzled out,” she adds. “In the early ’90s, when the garage thing was so great in San Francisco, we played with the Mummies, the Phantom Surfers, Supercharger, we all played together. And then it just kind of died out, and we did get sick of it, and each other. But it’s fun, I like getting together and playing with these guys once in awhile.”

While their initial run ended in ’97, the group left a lasting impression on future generations of San Francisco garage groups, particularly girl groups, which has surprised Zolot. “I have my Instagram, and a lot of young bands that are still in high school [post on there] like ‘oh I look up to you,’ ‘you inspire me to write music and be a girl on guitar,’ and I’m like, how did you even hear about us? It’s cool, but sometimes it shocks me that young people know who we are.”

The aesthetic was based in high camp and cheap glamour — also seen on the cover of Spend the Night with the Trashwomen, the trio lounging in bed together, dolled up and looking tough in leopard print bras, red lace crop tops, and black babydoll dresses.

“It came from a lot of pin-up stuff and ’60s go-go girls. We wanted to have a weird persona, I think, like Russ Meyer bad girls,” Lucchesi says.

The group was known to play live in matching outfits, often trashy lingerie. “I don’t know if you’ll see us wearing lingerie on stage again though,” Zolot says.

Though Lucchesi and Pimm do mysteriously mention possible planned outfits for Burger Boogaloo, noting that they’re working on a little something.

“There may be just a little flair,” Pimm says with a laugh.

“No bikinis though!” Zolot again reminds everyone.

The three have an easy rapport, which Pimm says took only about 22 years to master. Each time they get back together in Lucchesi’s garage, it’s like starting over fresh, but the songs eventually come rumbling back to them, she says. They’ve been practicing for about two months this time around, going back through the classic tracks, with no intention of writing new ones. “I get disappointed when I see an older band and they don’t play much of their stuff that we all grow up with,” Zolot says. Everyone nods in agreement.

The group originally came together fresh out of high school. Lucchesi and Pimm had gone to school together in Corte Madera and both moved to San Francisco at age 18, where they met Elka. She’d grown up in Los Angeles, and moved to SF, forming the psychobilly group Eightball Scratch.

The Trashwomen were supposed to be a one-off Trashmen cover band for a New Year’s party at a long-gone venue called the Chameleon, kicking off 1992 in surf garage style. The idea was masterminded by Mike Lucas from the Phantom Surfers, then a popular local surf band.

For NYE, they learned a handful of Trashmen songs, got drunk, and played the set twice.

“After that, people kept calling, so we realized, we better write a bunch of songs,” Zolot says.

Since she’d been in Eightball Scratch, she’d already been playing punk and rockabilly guitar parts, so she continued to do so in the Trashwomen, adding even more surfy reverb.

She’s been playing music since before she can remember, and as a teenager was influenced by the Go-Go’s. “I’d listen to the Go-Go’s and pretend I was on stage.”

“I think every girl did that when that album came out,” says Lucchesi, who since the Trashwomen has gone on to front a dozen bands, including the Bobbyteens. “The Ramones definitely got me more into guitar. Every day after work I would just come home and play to the tape.”

Their personal influences all seem to overlap with those creepy-sexy goth punks, the Cramps. “All the great punk stuff, and new wave, all that stuff was happening. We were lucky we got to see it,” Lucchesi says. Putting on a mock cranky-old-lady accent she adds, “Kids today, they don’t kno-ow.”

They also once played Bimbo’s, opening up for Nina Hagen, and they flew to New York to play CBGBs, which was monumental for all three. The day after the show, they went to Coney Island, ate hot dogs, and rode the Cyclone — on which Zolot severely injured her back; she has yet to go on a rollercoaster since. They were also heckled along the boardwalk, Pimm says. “Some of the girls at Coney Island, they were like, ‘excuse me, B-52s!'”

The band also toured Europe and Japan briefly, playing alongside its Japanese equivalent, the 5.6.7.8’s.

“The Germany shows were weird,” Pimm says. “We played somewhere in East Berlin, and all these metalheads walked in and we were like, ‘this is our audience? They’re going to hate us!’ The crowd ended up not letting the Trashwomen leave the stage, standing up front with folded arms, begging them to play more.

From all the stories, it seems like an aggressive, wildly exciting time for the band, but it’s easy to see why it eventually fizzled. Lucchesi has gone on to form acts like the aforementioned Bobbyteens, and is also currently in two-person garage-punk band Cyclops with her boyfriend Jonny Cat, and Midnite Snaxxx, with former Bay Guardian staffer Dulcinea Gonzalez. She also runs Down at Lulu’s a little vintage shop and hair salon in Oakland she opened seven years back with Seth Bogart, a.k.a. Hunx, and now runs solo.

Zolot works in catering at wineries in the Napa area, dressing like a pin-up girl and shucking oysters with a mobile oyster bar, and also does photography. She’s not currently in another band, but says she has some secret music projects in the works.

“We didn’t even know that!” Lucchesi says when Zolot reveals this.

“It’s not the same style as people would expect, so I don’t talk about it much,” Zolot says.

“No! That’s for Tasha, she’s got that covered,” Zolot says, speaking of her daughter, Natassia Zolot, a.k.a rapper Kreayshawn. (Kreay can be heard at age five screaming the lead on the Trashwomen single “Boys Are Toys.”)