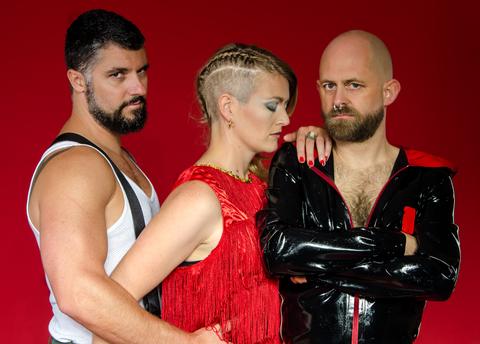 “It’s the longest, most ridiculous title ever,” Accidental Bear blog owner and founder Mike Enders said in a Guardian interview.

But it’s also a two-fer. It’s giving exposure to the bands playing while raising money to donate to LGBT foundations in support of mental health including the San Francisco-based Stonewall Project, the LAGay and Lesbian Center, Ali Forney Center, Pride Foundation, and Q Center.

“All of these people [performing] are up-and-coming and some people have been around longer than others,” Enders said. “I wanted to have people who are going to draw a crowd and each one of these bands has their own group or pull.”

There are some big characters and personalities performing, and it’s going to be a high energy show. It’s also something you don’t want to bring your grandma to.

“Parts of the show are going to be X-rated,” Enders said. “Not like, nude, but Big Dipper, he has a lot of songs about his private parts. His version of the twerking that’s going on, is a song he has out called ‘Dick Bounce.’”

The Accidental Bear Tour is going to be a fun, queer time that also aims to eliminate the stigma that surrounds mental health and bring awareness to the alarming rates of suicide in the LGBTQ community.
Enders has a personal connection to the cause as well.

“In 2007, I started having these out-of-the-blue horrible panic attacks. And, being someone who didn’t have a lot of money, that was uninsured, I couldn’t find a resource, couldn’t find anybody to help,” Enders said.

He went to LGBT-specific services that couldn’t help due to him being uninsured, or being put on the end of a waiting list.

“I ended up in the emergency room,” Enders said. “If you’re unaware of what’s actually happening with a panic attack, a lot of times people think they’re having a heart attack. It was just kind of an eye opener. Luckily, I had good support around me, but I just realized there’s a real lack in services.

“The fact is, everyone in their life has dealt with a mental health issue. It’s kind of embarrassing admitting it now. It’s weird with the stigma to it.”

Tickets start at $15, and are on sale now. The tour kicks off here in San Francisco on July 5 at Beatbox, and will travel to LA, Portland, Seattle, and finish in New York City on the 19th.

“This is something that the queer world is missing right now,” Enders said. “Everything right now’s like DJs and dance music.”

The Accidental Bear Tour features dance, rap, hip hop, and electro music – a little something for everyone.

It’s going to be a great, big, gay time, with awesome performances while simultaneously fighting for a good cause.