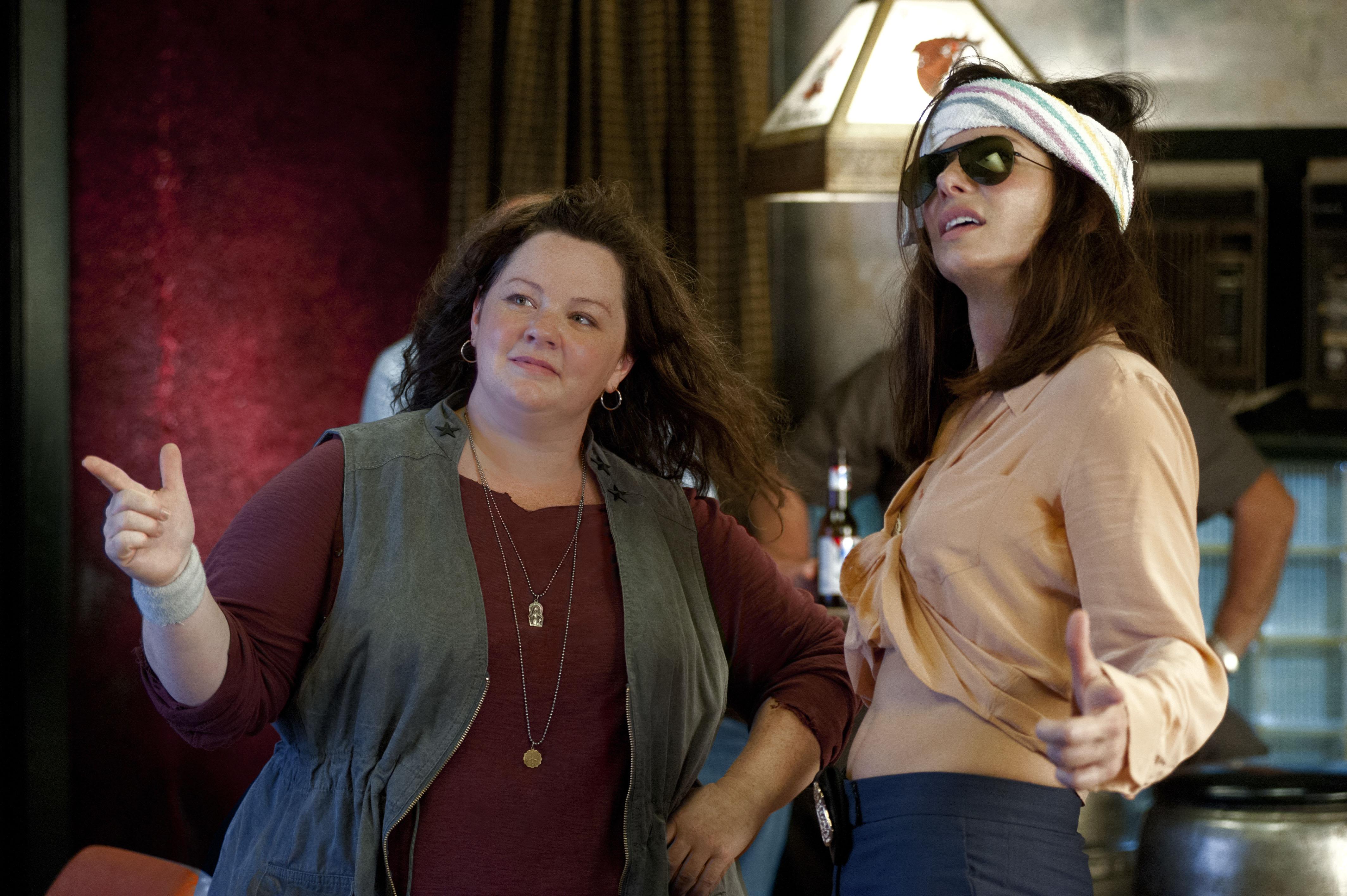 This week: two music docs, a buddy-cop movie starring Sandra Bullock and Melissa McCarthy, and America’s Sweetmeat Channing Tatum saves the White House and, ergo, the world. Plus, more! Read on for takes from our critics.

The Heat First things first: I hated Bridesmaids (2011). Even the BFF love fest between Maya Rudolph and Kristen Wiig couldn’t wash away the bad taste of another wolf pack in girl’s clothing. Dragging and dropping women into dude-ly storylines is at best wonky and at worst degrading, but The Heat finds an alternate route. Its women are unlikable; you don’t root for them, and you’re not hoping they become princesses because such horrifying awkwardness can only be redeemed by a prince. In Bridesmaids and Heat director Paul Feig’s universe, friendship saves the day. Sandra Bullock is Murtaugh to Melissa McCarthy’s Riggs, with tidy Bullock angling for a promotion and McCarthy driving a busted hoopty through Boston like she’s in Grand Theft Auto. Circumstances conspire to bring them together on a case, in one of many elements lifted from traditional buddy-cop storylines. But! The jokes are constant, pelting, and whiz by like so much gunfire. In one running gag, a low-rung villain’s worst insult is telling the women they look old — but neither character is bothered by it. It’s refreshing to see embarrassment humor, so beloved by chick flicks, get taken down a peg by female leads who don’t particularly care what anyone thinks of them. (1:57) (Sara Maria Vizcarrondo)

Hey Bartender Hey, have you heard of this trendy thing called craft cocktails? Be warned, sophisticated San Francisco drinkers: Douglas Tirola’s upbeat documentary mentions our fair city in passing only a handful of times; instead, it concentrates on New York City’s relatively recent “cocktail revolution,” interviewing movers and (literal) shakers on the scene while giving a brief history of cocktails in America (again, with an emphasis on NYC). Hey Bartender‘s focal points are well-chosen studies in contrast: ex-Marine Scott — tattooed and scrupulously mustached — who’s working his way up the ranks at hipster lounge Employees Only; and middle-aged Steve, who runs a struggling blue-collar bar just outside the city and is slowly coming around to the idea of adding fancier drinks to his menu. Though dive-bar denizens may roll their eyes at some of Hey Bartender‘s more pretentious trappings (the movie doesn’t mention it, but drinks at Employees Only are in the $15-16 range), it does make the case that today’s superstar “mixologists” deserve just as much recognition as superstar restaurateurs. And the film has a point: can a Top Chef spinoff for bartenders be that far off? (1:32) Roxie. (Cheryl Eddy)

Laurence Anyways Xavier Dolan’s latest is yet another gorgeously-designed love story; it fits perfectly alongside his extremely personal I Killed My Mother (2009) and the devastating Heartbeats (2010). Although some critics have suggested that this young director needs to hire an editor (Laurence Anyways clocks in at two hours and 48 minutes), I would argue that this epic, gender-bending love story needed to take its stylized time to achieve what most films never do: humanize a transgendered lead character. Melvil Poupaud (Raúl Ruiz’s favorite ingénue) is stunning as Laurence; as his longtime lover, Fred, Suzanne Clément performs with a guttural passion that should keep audiences glued to the screen. For those willing to accept a decade’s worth of hypnotic set and costume designs (the film spans 1989-1999); cryptic character development; a crew of campy castaways; and an electric, eclectic soundtrack (Depeche Mode, Celine Dion), Laurence Anyways is well worthy of its epic running time. Could this be the film that elevates Canada’s best-kept secret to being the leader of a post-gender film movement that’s just about to explode? (2:48) Metreon. (Jesse Hawthorne Ficks)

The Secret Disco Revolution Jamie Kaster’s Canadian documentary chronicles the rise and fall of the 70s booty shaking phenomenon — though what with the subsequent developments of house music, rave culture, et al., you might say disco never really went away. It’s got a goldmine of kitschy vintage clips, and plenty of enjoyable interviews with the scene’s erstwhile stars (Thelma Houston, “KC” Casey, etc.), producers, and observers. (The weirdest are scenes with the Village People, who today are staples on the corporate-party circuit and seem bizarrely eager to deny they were ever a subversively gay act.) Unfortunately, Kaster also burdens the film with sometimes overreaching arguments for disco’s sociopolitical radicalism, as mostly articulated by academic Alice Echols. And there’s a labored staged thread in which an arch narrator informs of us the behind-the-scenes mechanizations of three fictive “masterminds” (played by actors) who propagated disco to liberate gays, women and ethnic minorities. It’s a whimsical conceit that falls completely flat. As a result, there’s plenty of fun to be had here, but the conceptual missteps make this less than the definite disco doc it aims to be. (1:25) (Dennis Harvey)

20 Feet From Stardom Singing the praises of those otherwise neglected backup vocalists who put the soul into that Wall of Sound, brought heft to “Young Americans,” and lent real fury to “Gimme Shelter,” 20 Feet From Stardom is doing the rock ‘n’ roll true believer’s good work. Director Morgan Neville follows a handful of mainly female, mostly African American backing vocal legends, charts their skewed career trajectories as they rake in major credits and keep working long after one-hit wonders are forgotten (the Waters family) but fail to make their name known to the public (Merry Clayton), grasp Grammy approval yet somehow fail to follow through (Lisa Fischer), and keep narrowly missing the prize (Judith Hill) as label recording budgets shrivel and the tastes, technology, and the industry shift. Neville gives these industry pros and soulful survivors in a rocked-out, sample-heavy, DIY world their due on many levels, covering the low-coverage minis, Concert for Bangladesh high points, gossipy rumors, and sheer love for the blend that those intertwined voices achieve. One wishes the director had done more than simply touch in the backup successes out there, like Luther Vandross, and dug deeper to break down the reasons Fischer succumbed to the sophomore slump. But one can’t deny the passion in the voices he’s chosen to follow — and the righteous belief the Neville clearly has in his subjects, especially when, like Hill, they are ready to pick themselves up and carry on after being told they’re not “the Voice.” (1:30) (Kimberly Chun)

White House Down Ah, the mid-1990s: a time when two big-budget movies on the same subject were regularly released within months of each other (1997’s Volcano and Dante’s Peak; 1998’s Armageddon and Deep Impact). When a director named Roland Emmerich ascended into the blockbuster pantheon with Independence Day (1996), a film that’s best-remembered for that iconic shot of the White House exploding under alien death rays. The intervening years have seen Emmerich plunge ever-deeper into various flavors of disaster, and White House Down — which reignites that ’90s copycat-rivalry thing by riding the fumes of March’s Olympus Has Fallen — finds its boogeyman in domestic terrorism. It beings on a triumphant day for President James Sawyer (Jamie Foxx), who has just ordered all US troops removed from the Middle East — angering some high-up men in his administration, as well as some ex-military goons with axes of their own to grind. When the White House is compromised, a wannabe Secret Service agent (Channing Tatum), at the Prez’s house for a tour with his precocious daughter, shoulders one-man-army duties. Rockets are launched; there’s a high-speed limo chase across the White House lawn; we learn the truth about Marilyn and JFK; and thanks to evil genius Skip Tyler (Jimmi Simpson), “the greatest hack the world has ever seen” is about to unleash World War III. Yep, that’s right: 17 years after ID4‘s Jeff Goldblum broke into the alien mainframe, thereby saving the White House-less planet, Emmerich has decided that hackers are actually bad guys. It goes with White House Down‘s warning that the enemy is no longer an external threat, but something lurking right under your nose. Better start working out, America — and working on your one-liners. (2:17) (Cheryl Eddy)