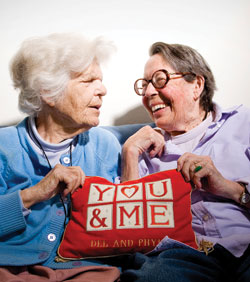 Watch this space throughout the day for breaking news on the decision and reactions. Tonight there will be a celebration of the Court’s decisions at Castro and Market Streets at 6:30pm. (Join  the Guardian beforehand, 6-9 at the Pilsner in the castro, at its annual pre-Pride event.)

The Supreme Court released its ruling this morning that the Defense of Marriage Act, which denies federal recognition of same-sex marriage, “is unconstitutional as a deprivation of the equal liberty of persons that is protected by the Fifth Amendment.”

“DOMA singles out a class of persons deemed by a State entitled to recognition and protection to enhance their own liberty,” according to the majority opinion. “DOMA’s principal effect is to identify a subset of state sanctioned marriages and make them unequal.” The Court voted 5-4, with Justice Kennedy, who wrote the majority opinion, as the decisive vote along the usual liberal/conservative lines. You can read the full opinion here.

This means that same-sex marriages performed in states that have legalized such marriages will be recognized by federal law.

As for Hollingsworth v. Perry, the Prop 8 case, it was dismissed on standing, due to the fact that the State of California refused to defend the case that would uphold Prop 8 (which denied same-sex marriage).That meant private citizens were left to defend a state statute, which was unprecedented, and the Court refused to rule on those grounds.

“We have never before upheld the standing of a private party to defend the constitutionality of a state statute when state officials have chosen not to. We decline to do so for the first time here,” the majority Court statement (which broke along the typical 5-4 line) said. That means there is no specific decision from the Court regarding Prop 8, and the previous ruling, by Judge Vaughan Walker and upheld by the Ninth Circuit Court, that invalidated Prop 8 as discriminatory, stands.

This may mean that same-sex marriages in California can resume as early as July.

You can read the full Prop 8 ruling here.

City Hall was totally packed at 7am when the US Supreme Court convened — tons of journalists, lots of couples, many signs in the crowd. Two screens were set up, one with a live blog from court chamber, the other with the CNN live feed. Huge cheers erupted at 7:11 when the decision was announced striking down DOMA and forcing the federal government to recognize the rights of same-sex married couples.  Then at 7:38, when the Prop 8 statement came down, the room went nuts.

A moment later, an array of current and former city officials appeared at the top of the City Hall main staircase. Mayor Ed Lee and Lt. Gov. Gavin Newsom escorted a fragile Phyllis Lyon down the stairs — she, along with the late Del Martin, were the first same-sex couple to get legally married in California in 2004 — flanked by the rest of the city family, all with big smiles.

“Welcome to the people’s house of San Francisco,” Mayor Lee said, thanking the crowd “for sharing in this historic moment.”

“It feels good to have love triumph over ignorance,” he said.

At 7:44, City Attorney Dennis Herrera and Chief Deputy City Attorney Terry Stewart, who had been on the City Hall steps addressed reporters’ question on the legal details of the ruling, joined the crew to sustained applause as Lee recognized them. He then introduced Newsom, who in 2004 as San Francisco mayor allowed same-sex marriages to be performed, as “one person who used the power of this office to make history and show his love for the city.”

“San Francisco is not a city of dreamers, but a city of doers,” Newsom said. “Here we don’t just tolerate diversity, we celebrate our diversity.” He thanked Herrera and everyone who contributed to this moment. “It’s people with a true commitment to equality that brought us here.”

Newsom introduced Kate Kendall with the National Center for Lesbian Rights, who has led the coalition of groups that have push for marriage equality. She looked around the crowd and said, “Fuck you, Prop 8!”

The crowd roared, and she said that she had scanned the room for children, and promised to “put a dollar in the swear jar” if necessary. But she said that, “We have lived for too many years under that stigmatizing piece of crap.”

Then Herrera took the podium, turned to Newsom, and said, “Now you can say, ‘Whether you like it or not!'” — a joking reference to Newsom’s same-sex marriage rallying cry, which some blamed for boosting the anti-same-sex marriage cause.

“We wouldn’t be here today if it wasn’t for Gavin Newsom’s leadership,” Herrera continued. ““I remember in 2004 when people were saying it was too fast, too soon, too much.”

But today, that long effort has been vindicated, Now, he said, “It’s about changing the hearts and minds of people and educating them.” He also pledged to continue the fight that began here in City Hall more than nine years ago: “We will not rest until we have marriage equality throughout this country.”

Finally Stewart, who has argued cases related to San Francisco’s stand before both the US and California Supreme Courts, praised both the Prop. 8 and DOMA rulings and the precedents they set. “In the DOMA case decision, the Supreme Court expressed a stong equal protection philosophy…that will help legalize same sex marriage in other states.”

Three members of the Board of Supervisors were also invited by Kendell to address the huge City Hall crowd: Board President David Chiu and Sups. David Campos and Scott Wiener, the only two current supervisors who are gay.

Chiu noted that the bust of slain Sup. Harvey Milk is prominently positioned outside the Board Chambers, a reminder of the long struggle for gay rights that San Franciscans have led. “That work lives on today,” he said.

He added the hope that the work done here will ripple out of across the country because, he said, “As goes San Francisco, so goes California, so goes the rest of the country.”

Campos, an attorney who has long been in a committed relationship, said, “It’s a very emotional moment for those of us who are part of the LGBT community.” He said this Supreme Court ruling is the first time it has really acknowledged “that we are people and we have dignity,” and that the rulings sends a clear message to Congress that legislation like DOMA is unconstitionally discriminatory.

Wiener praised the resilience of the LGBT community, from the early days of enduring the AIDS crisis and fighting for federal support through the current campaign for marriage equality. And he cheered the fact that, “Those marriages that we see under the rotunda [in City Hall] will get a little more diverse.”

While Newsom strutted around like a proud peacock in front of City Hall — clearly the leading man in this epic story with the happy ending, much in demand by the television crews — Herrera and Stewart briefed various reporters on the details of the case that they had just won.

“I wanted a merits ruling, but a standing ruling is a victory too,” Herrera told us, making the distinction between the court ruling that banning same-sex marriage is unconstitutional on the grounds of equal protection under the law — which it did not do — and the 5-4 ruling it did issue: that those who appealed the Ninth Circuit Court ruling invalidating Prop. 8 lack proper legal standing to do so.

The standing ruling leaves same-sex marriage opponents more wiggle room to argue that the ruling might only apply to the couples named in the suit, or in just the counties that took part, which also included Alameda and Los Angeles, positions they were already signaling in press statements.

But Herrera said that he would vigorously contest that kind of challenge, which he considers to be without merit, telling us, “The injunction is not limited in its scope.”

Police Chief Greg Suhr, who attended the City Hall event, said the timing on the ruling during Pride Week couldn’t be better. “It’s nice that it all lined up for us,” he told us. “This town is going to rock ‘til the wheels come off.”

Asked whether he has any heightened security concerns about the Pride Parade in the wake of a ruling that is controversial to some, Suhr said that he’s not worried. He said SFPD is now fully staffed and all available personnel working this weekend, although he will try allow many of his gay and lesbian officers to join the celebration if they want.

“We’re going to police what’s likely to be the biggest party this city has ever seen,” Suhr said, adding that his policing philosophy is, “We plan for the worst and hope for the best.”