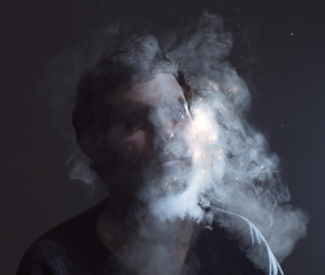 MUSIC It’s amazing what a difference two years makes. In June of 2011, I packed into a sweaty club in Silver Lake to see an up-and-coming glitch producer by the name of Baths (né Will Wiesenfeld) perform a triumphant home-town gig. Preceded by similarly buzzy beatsmiths like Shlohmo and Groundislava, Wiesenfeld spent the hour-long set hiding behind a table full of laptops and sequencers, pairing aggressive, wildly vacillating beats with heady melodies and his Sigur Rós-ian falsetto. While the show was a viscerally arresting experience, it was severely lacking in personality — painting its young architect as a musician much more interested in crafting a unique sonic aesthetic than baring his soul.

Fast forward almost two years, and Wiesenfeld has released an intimate, crushingly personal second album. Obsidian is a harrowing journey into the fractured psyche of an naked young artist, a complete 180 from his beat-driven, somewhat opaque debut, Cerulean. Though there were signs that he was moving in a new direction — notably the brilliant “Pop Song” from his 2011 odds-and-ends LP, Pop Music/False B-Sides — it is a brave, unexpected step forward for the 24-year-old. The Tarzana, Calif.-native strips back the eclectic, maximalist sound of his early work in favor of down-tempo, sparse, vocal-driven numbers.

The confessional lyrics come thick and fast, beginning with the bleak, shadowy, “Worsening.” “Where is God when you hate him most? / When the coughs in the earth come to bite at my robes,” emotes the stricken singer-songwriter, after admitting that he “might try to die.” During the time he was supposed to be working on Obsidian, Wiesenfeld was struck down by a vicious bout of E. Coli. His struggle with the debilitating disease is chronicled throughout the album, no more so than on its opener.

Lyrically, much of Obsidian is explosive, cathartic, and sometimes frankly uncomfortable, and they aren’t just related to his illness. The stand-out third track, “Ironworks,” is a beautiful song of denied love. Driven by a glorious string line and a cascade of piano — which recalls Ryuichi Sakamoto at times — Wiesenfeld tells the story of a man (presumably, him) falling in love with a married man, who denies his love and returns to the comfort of his wife after their relationship. Alone in the end, Wiesenfeld cries, “I am sweet swine. / And no man is ever mine.”

Throughout the album, he touches on anonymous sex, abuse, nihilism, and everything in between — often playing the role of perpetrator. Lyrics like, “And I never see your face, but I just might be okay with that. / Because I have no eyes, I have no love, I have no hope. / And it is not a matter of if you mean it. / But it is only a matter of come and fuck me.” At early listens, it’s difficult to imagine such a bubbly, gregarious character saying these salacious things. Trent Reznor, Kanye West, sure. A chubby, bespectacled kid from the Valley, not so much.

And though there is a lot of darkness on Obsidian, it’s not all sour times. Compositionally, the classically-trained pianist is capable of crafting mellifluous, lush arraignments and soaring vocal melodies. He also loves to cake on layers of woozy percussive droplets, giving his tracks a propulsive, cinematic quality. Though much of the album is of the down-tempo variety, he freshens things up with a few curve-balls, namely on the aggressive, industrial-influenced, “Earth Death,” and the Postal Service churn of “Ossuary.”

Wiesenfeld will be debuting much of this material this to the Bay Area this week, when his tour with buzzy, Chicago-based duo, Houses rolls into the Great American Music Hall. His choice of opening acts reflects his musical shift, as Houses craft reflective, affecting mood music — quite a bit different than the hip-hop/dance stylings of the artists who flanked him two years ago. While the laptop is likely to make an appearance, there will be plenty of live instrumentation on show with Wiesenfeld spending time on the keyboards and bandmate Morgan Greenwood taking on a few different instruments. It will be fascinating to see how he handles his new direction, but you can guarantee that the effusive, passionate performer will be pouring his heart into his show, the same way he poured it into Obsidian.