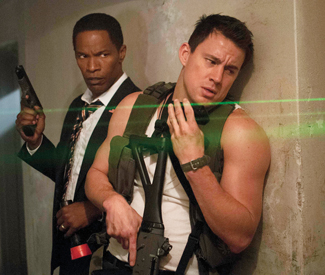 FILM Ah, the mid-1990s: a time when two big-budget movies on the same subject were regularly released within months of each other (1997’s Volcano and Dante’s Peak; 1998’s Armageddon and Deep Impact). When a director named Roland Emmerich ascended into the blockbuster pantheon with Independence Day (1996), a film that’s best-remembered for transforming Will Smith into an action star — and for that iconic shot of the White House exploding under alien death rays.

The intervening years have seen Emmerich plunge ever-deeper into various flavors of disaster: giant lizard (1998’s Godzilla); Mel Gibson (2000’s The Patriot); global warming (2004’s The Day After Tomorrow); the apocalypse (2009’s 2012). White House Down — which reignites that ’90s copycat-rivalry thing by riding the fumes of March’s Olympus Has Fallen — finds its boogeyman in terrorism. Specifically, domestic terrorism, with another 1996 classic, Michael Bay’s The Rock, offering certain inspiration in the villain department. Ex-military goons with axes to grind storming a national landmark? Right this way, please.

It’s a triumphant day for President James Sawyer (Jamie Foxx), who has just ordered all US troops removed from the Middle East. While ID4‘s President Bill Pullman was a Gulf War veteran, Sawyer is portrayed as more of an anti-violence, increase-the-peace type. But wait! Who are those shifty-eyed fellows skulking around the White House theater room, tinkering with the First Lady’s prized surround-sound system? They don’t look ready to make nice.

Into this mix must enter an Everyman. Beefy nugget Channing Tatum plays John Cale, wannabe Secret Service agent. Trouble is, his former college classmate (and fling? It’s never certain, but every woman Cale interacts with seems to have slept with him), high-ranking Agent Finnerty (Maggie Gyllenhaal), doesn’t think he has what it takes. According to the deep truths of his personnel file, Cale — a Capitol policeman tasked with guarding the Speaker of the House (Richard Jenkins) — “has a problem with authority,” despite his seemingly sincere desire to become an astronaut … er, wait, that was Will Smith’s cocky pilot in ID4.

At any rate, there is (as always) a family to impress; in Cale’s case, it’s a plucky daughter (Joey King), always on the lookout for new fodder for her YouTube channel. What better way to win over a kid who blurts out “Wikileaks” with as much excitement as other 11-year-olds say “One Direction” than to take her on a tour of the White House?

That’s the set-up. The remainder of the film encompasses Cale’s sweaty, sardonic one-man-army maneuverings (in John McClane’s undershirt, no less), to keep both Sawyer — a POTUS so cool he pauses mid-ambush to change into Air Jordans — and Li’l Miss Citizen Journalist safe. Meanwhile, rockets are launched; there’s a high-speed limo chase across the White House lawn; we learn the truth about Marilyn and JFK; The Wire‘s Lance Reddick shows up to turn his McNulty-honed glare onto Gyllenhaal; some high-ranking government dudes reveal their sinister true colors; and thanks to evil genius Skip Tyler (Jimmi Simpson), “the greatest hack the world has ever seen” is about to unleash World War III.

Yep, that’s right: 17 years after Independence Day‘s Jeff Goldblum broke into the alien mainframe, thereby saving the White House-less planet, Emmerich has decided that hackers are actually bad guys. It goes with White House Down‘s warning that the enemy is no longer an external threat, but something lurking right under your nose. Better start working out, America — and working on your one-liners.