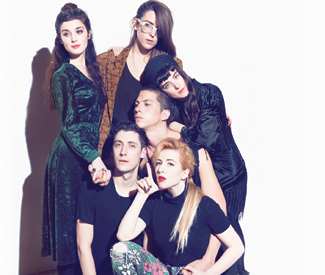 TOFU AND WHISKEY Unlike most anticipated albums these days, Austra‘s sophomore LP, Olympia (June 18, Domino Records), came out in gleaming little drops. There were no leaked full downloads — at least, nothing massively widespread. But the sparkly bits that did trickle out, namely first single “Home” and its follow-up, “Painful Like,” were enough to build interest.

The Canadian synth-pop six-piece already had a built-in audience, thanks to 2011’s Feel It Break, mostly created by darkly operatic lead vocalist Katie Stelmanis, former Trust vocalist Maya Postepski on drums, and bassist Dorian Wolf, and made almost exclusively on a computer. Now a more fully realized unit using live instrumentation, the group, which also includes keyboardist Ryan Wonsiak and supernatural twin backing vocalists Sari and Romy Lightman, created the lush, full-bodied second record together in a studio. And it shows: there’s a richness to the sound. There’s a steady dance beat throughout the record, with the addition of sounds like cowbells and even more barreling percussion underneath all those moody vocals wailings and subtle piano keys.

“We have so much percussion on the album, I had days where I would just play all day,” Postepski says from Switzerland, on the group’s brief tour through Europe. “I think it added to the richness to it, and the realness of the sound. As much as it is an electronic record, we wanted it to have a balance with real instruments.”

That first released track “Home” seduced critics earlier this spring with a more upbeat style than typical of Austra, yet the lyrics are again deeply personal for Stelmanis, about someone not coming home at night because they’re out getting wasted, and the desperate feeling of waiting for that person to return.

Sonically, second single, “Painful Like” gets more to the core of what the group does best, meshing gothy dancefloor-ready beats and bubbly synth with crashing drums and Stelmanis’ otherworldly vocals on display.

The lyrics were inspired by “the disillusionment of growing up gay in a small town and finding solace in the arms of a lover.”

Stelmis told Spinner in 2011, “Indie music is funny. It’s really not as queer positive as you would think. In a lot of ways, it’s very centered around white men, basically. I just want there to be space for gays.”

She seems to have taken that to heart on Olympia, including even more of herself than on Feel it Break.

“The lyrics on the new album are personal, intimate reflections of what Stelmanis is going through,” Postepski says.

The new record contains hints of other moody synth-based projects like former tourmate Grimes, the Knife, and Zola Jesus, though Postepski says she almost exclusively listens to music made before 1995, specifically Grace Jones and David Bowie. She does make an exception for British techno producer Andy Stott. “That’s where all the super low bassy stuff comes from,” she explains.

While many of the tracks follow the same formula, Olympia is packed with emotional dancefloor moments. It’s the kind of record that could soundtrack a crying fit in a dark club bathroom, mascara bleeding down the face, strangers surrounding the mirror, all of the drama inherent in nightlife, then follow the main character triumphantly back out onto the floor.

“As much as it is a serious album, there’s a lot of playfulness as well,” Postepski says. “I think we struck a good balance.”

Austra, which has toured internationally with groups like the XX, Grimes, and the Gossip will test the balance on a quick jaunt through the States, only stopping in a few major cities. One lucky enclave is San Francisco — the group plays here this week (Wed/26, 8pm, sold out. Independent, 628 Divisadero, SF). Noted for its creative use of stage layout and synchronized twin dance movements (“they’re kind of like our cheerleaders!”), Austra has a lot to live up to at its live shows. Postepski tells me this very short tour includes a massive, beautiful new backdrop, rented from the Chinese Opera Group in Toronto.

“People are having fun at the shows. I just want it to be a dance party, you know?” Postepski says.

There’s another group traveling to San Francisco this week that also will likely be filling up the dancefloor — and, coincidentally, also has toured with the Gossip — Magic Mouth. To get a taste of the explosive energy Magic Mouth exudes, check the YouTube video “MAGIC MOUTH LIVE: MISSISSIPPI STUDIOS,” it’s like watching James Brown front a garage-punk band. The lively Portland, Ore. queer soul-punk quartet will play Hard French Hearts Los Homos (an event described by DJ Carnita as “an intergalactic Pride Party for all the gayliens who love to dance in outer space”).

Magic Mouth will open for fellow Northwesterners, Seattle’s THEESatisfaction at the event hosted by Lil Miss Hot Mess (Sun/30, 4-11pm, $20. Roccapulco, 3140 Mission, SF; hardfrenchpride2013.eventbrite.com). This will be the band’s second time in SF, after stopping by El Rio last fall. But other tours have taken the group around the country opening for the Gossip, and JD Sampson’s MEN.

Magic Mouth has a glut of reasons to be keyed up for the SF show.

“I’m really looking forward to playing with THEESatisfaction. We’ve been admirers of theirs from afar for a minute and in kind of the same music community,” says frontperson Chanticleer Trü. “And also to celebrate at Hard French, because we love what they do.”

Guitarist Peter Condra adds, “And I’m excited to play a party that’s dedicated to a political cause, which is Bradley Manning. With what went down in San Francisco Pride, I think that fueled the organizers’ enthusiasm about the topic and I want to help them create awareness in any way we can as a band. I think it’s cool they took a stance on that.”

A crash course on those events: The LGBTQ community was torn apart when the SF Pride Board rescinded the election of Wikileaker Bradley Manning to the position of Community Grand Marshal at this year’s Pride celebration. There are planned actions and marches in support of Manning (see pTK) at the Pride parade, June 30.

So yes, Magic Mouth comes to us on a mission of both solidarity and fun. And likely, to gain new fans.

The group’s electric Believer EP saw release in 2012, and now it’s in the process of finishing up another, Devil May Care, which was funded with $10,000 raised through Kickstarter. The foursome worked on the record with Nathan Howdeshell and Hannah Blilie of the Gossip, who walked the band through the process, gave feedback, and connected Magic Mouth with a producer. Devil May Care will be released on vinyl in late summer.

Drummer Ana Briseño says, “Yeah, I think it’s taking us into the next level, a little more grownup, of taking this band seriously. The quality of the recording, and getting to put it out on vinyl, and being able to be involved in the artwork — I think we’re really lucky and not a lot of bands make it to that point.”

“In comparison to our first EP, which we recorded like, between two of our friends’ bedroom studios,” Trü says. “It’s definitely been an evolution, and this time around I feel like we really captured the type of energy we bring to a live performance.”

The band formed in 2010 when Briseño and guitarist Peter Condra met and started talking about music — Nina Simone being the uniting interest. Briseño and Condra started playing garage rock versions of Simone songs, and eventually created their own, which brought them to Trü and bassist Brendan Scott (Condra and Scott had played together before in a cover band). “And Trü was definitely feeling the Nina Simone thing we were channeling,” Condra says.

The group says it’s now actualizing its influences. The band members have already played with one influence in the Gossip and is about to play with another in THEESatisfaction, but future goal spots would be alongside Erykah Badu or Blood Orange. I mishear Trü, thinking he mentioned Beyonce also, so ask for clarification. He laughs and says, “no, but you must be reading my mind.”

Some background: local Southern fried rock group (“by way of Atlanta, Jakarta, and two Midwest podunk towns”) the White Barons includes members of Thee Merry Widows, Winter Teeth, and Whiskey Dick Darryls, and SF’s Wild Eyes recently opened for King Khan and BBQ Show at Slim’s. This Bender’s show is a party for a few things: it’s the birthday of Bender’s doorperson and Subliminal SF booker Mikey Madfes, it’s a split seven-inch release celebration for the White Barons and Wild Eyes, and lastly, there’s a band vs. band chili cookoff (if you buy a record, you’ll get a chili sample). So you know it’s going to be a messy mix of raucous rock’n’roll and tender cooked meats.