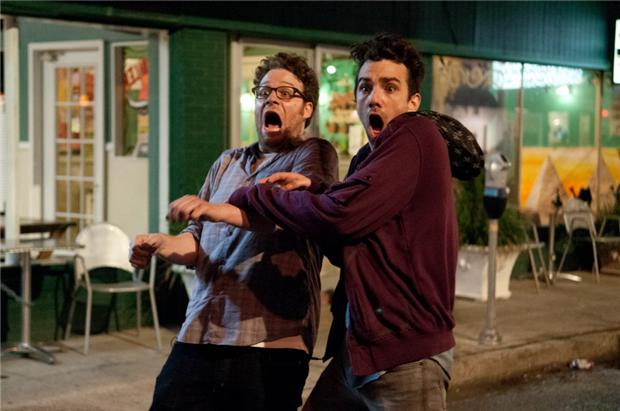 Already in theaters, Seth Rogen and his bro posse take on doomsday in This Is the End. I got the chance to talk with Mr. Rogen, his co-director and co-writer Evan Goldberg, and co-star Craig Robinson when they visited San Francisco a few days back. (Fun fact: Rogen really does laugh like that in real life.) Check the interview here!

In rep news, this weekend at the Castro Theatre heralds the San Francisco Silent Film Festival‘s “Hitchcock 9” event, spotlighting nine silent films by the guy who would later claim the title “Master of Suspense,” direct some of the greatest thrillers of all time, etc. You can’t go wrong with any of the films, but just for kicks, here’s my take on the series here. And at the Yerba Buena Center for the Arts, Austrian director Ulrich Seidl’s dark Paradise Trilogy continues its bummer-summer run this weekend; Dennis Harvey breaks ’em down here.

Plus! That Superman movie you’ve been hearing a thing or two about, and the rest of the week’s new offerings, after the jump.

Becoming Traviata Philippe Béziat’s backstage doc offers an absorbing look at a particularly innovative production of Verdi’s La Traviata, directed by Jean-François Sivadier and starring the luminous Natalie Dessay (currently appearing in SF Opera‘s production of Tales of Hoffman). Béziat eschews narration or interviews; instead, his camera simply tracks artists at work, moving from rehearsal room to stage as Sivadier and Dessay (along with her co-stars) block scenes, make suggestions, practice gestures, and engage in the hit-and-miss experimentation that defines the creative process. The film is edited so that La Traviata progresses chronologically, with the earliest scenes unfolding on a spartan set (Dessay’s practice attire: yoga clothes), and the tragic climax taking place onstage, with an orchestra in the pit and sparkly make-up in full effect. Dessay will appear in person at San Francisco screenings Sat/15 at 7pm and Sun/16 at 2pm. (1:53) (Cheryl Eddy)

Dirty Wars Subtitled “the world is a battlefield,” this doc follows author and Nation magazine writer Jeremy Scahill as he probes the disturbing underbelly of America’s ongoing counterterrorism campaign. After he gets wind of a deadly nighttime raid on a home in rural Afghanistan, Scahill does his best to investigate what really happened, though what he hears from eyewitnesses doesn’t line up with the military explanation — and nobody from the official side of things cares to discuss it any further, thank you very much. With its talk of cover-ups and covert military units, and interviewees who appear in silhouette with their voices disguised, Dirty Wars plays like a thriller until Osama bin Laden’s death shifts certain (but not all) elements of the story Scahill’s chasing into the mainstream-news spotlight. The journalist makes valid points about how an utter lack of accountability or regard for consequences (that will reverberate for generations to come) means the “war on terror” will never end, but Dirty Wars suffers a bit from too much voice-over. Even the film’s gorgeous cinematography — director Rick Rowley won a prize for it at Sundance earlier this year — can’t alleviate the sensation that Dirty Wars is mostly an illustrated-lecture version of Scahill’s source-material book. Still, it’s a compelling lecture. (1:26) (Cheryl Eddy)

The Guillotines Why yes, that is Jimmy Wang Yu, director and star of 1976 cult classic Master of the Flying Guillotine, in a small but pivotal role commanding a team of assassins who specialize in dispatching heads with airborne versions of you-know-which weapon. Unfortunately, this latest from Andrew Lau (best-known stateside for 2002’s Infernal Affairs, remade into Martin Scorsese’s 2006 Oscar-winner The Departed) doesn’t have nearly as much fun as it should; dudes be chopping heads off in a flurry of CG’d-up steampunky whirlygigs, but The Guillotines‘ tone is possibly even more deadly, as in deadly serious. When a rebellious prophet-folk hero known as Wolf (Xiaoming Huang) runs afoul of the Emperor’s top-secret Guillotine brotherhood, led in the field by Leng (Ethan Juan), the squad travels in disguise to a rural, smallpox-afflicted village to track him down. Along for the journey is the Emperor’s top operative, ruthless Agent Du (Shawn Yue), a boyhood friend of Leng’s. Leng and Du share a dark secret: the Guillotines have been deemed expendable — yep, in the Stallone sense — and the Emperor has decided to kill them off and replace them with armies toting guns and cannons in the name of progress. Lau is no stranger to tales of men grappling with betrayals, misplaced loyalties, and hidden personal agendas — and as historical martial-arts fantasies go, The Guillotines has higher production values than most, with sweeping, luscious photography. Too bad all the action scenes are punctuated by episodes of moody brooding — replete with slo-mo gazing off into the distance, dramatically falling tears, solemn heart-to-hearts, swelling strings, and the occasional howl of anguish. (1:53) (Cheryl Eddy)

Man of Steel As beloved as he is, Superman is a tough superhero to crack — or otherwise bend into anything resembling a modern character. Director Zack Snyder and writer David S. Goyer, working with producer Christopher Nolan on the initial story, do their best to nuance this reboot, which focuses primarily on Supe’s alien origins and takes its zoom-happy space battles from Battlestar Galactica. The story begins with Kal-El’s birth on a Krypton that’s rapidly going into the shitter: the exploited planet is about to explode and wayward General Zod (Michael Shannon) is staging a coup, killing Kal-El’s father, Jor-El (Russell Crowe), the Kryptonians’ lead scientist, and being conveniently put on ice in order to battle yet another day. That day comes as Kal-El, now a 20-something earthling named Clark Kent (Henry Cavill) — resigned to his status as an outsider, a role dreamed up by his protective adoptive dad (Kevin Costner) — has turned into a bit of a (dharma) bum, looking like a buff Jack Kerouac, working Deadliest Catch-style rigs, and rescuing people along the way to finding himself. Spunky Lois Lane (Amy Adams) is the key to his, erm, coming-out party, necessitated by a certain special someone looking to reboot the Kryptonian race on earth. The greatest danger here lies in the fact that all the leached-of-color quasi-sepia tone action can turn into a bit of a Kryptonian-US Army demolition derby, making for a mess of rubble and tricky-to-parse fight sequences that, of course, will satisfy the fanboys and -girls, but will likely glaze the eyes of many others. Nevertheless, the effort Snyder and crew pack into this lengthy artifact — with its chronology-scrambling flashbacks and multiple platforms for Shannon, Diane Lane, Christopher Meloni, Laurence Fishburne, and the like — pays off on the level of sheer scale, adding up to what feels like the best Superman on film or TV to date — though that bar seems pretty easy to leap over in a single bound. (2:23) (Kimberly Chun)

Pandora’s Promise Filmmaker Robert Stone has traveled far from his first film, 1988’s Oscar-nominated anti-nuke Radio Bikini, to today, with the release of Pandora’s Promise, a detailed and guaranteed-to-be-controversial examination of nuclear power and the environmentalists who have transitioned from fervently anti- to pro-nuclear. Interviewing activists and authors like Stewart Brand, Gwyneth Cravens, Mark Lynas, and Michael Shellenberger, among others, Stone eloquently visualizes all angles of their discussion with media, industrial, and newly shot footage, starting with a visit to the largest nuclear disaster of recent years, Fukushima, which he visits with the hazmat-suited environmental activist and journalist Lynas and continuing to Chernobyl and its current denizens. Couching the debate in cultural and political context going back to World War II, Stone builds a case for nuclear energy as a viable method to provide clean, safe power for planet in the throes of climate change that will nonetheless need double or triple the current amount of energy by 2050, as billions in the developing world emerge from poverty. In a practical sense, as The Death of Environmentalism author Shellenberger asserts, “The idea that we’re going to replace oil and coal with solar and wind and nothing else is a hallucinatory delusion.” Stone and his subjects put together an enticing argument to turn to nuclear as a way forward from coal, made compelling by the idea that designs for safer alternative reactors that produce less waste are out there. (1:27) (Kimberly Chun)