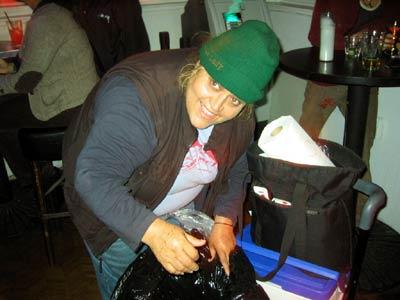 She’s been slinging her steamy goodness to famished drunkards out of a trash bag in a cooler strapped to a wagon for years with no problem (other than some grumbles about a recent, tiny price hike). But it looks like the the health department — or threat of the health department — may have finally caught up with the beloved Tamale Lady, aka Virginia Ramos.

Today, SF’s Internet melted with news that she had been asked to not sell her tamales at Zeitgeist. That bar posted a message to its Facebook:

We are sad to announce that the Tamale Lady may no longer sell her tamales at Zeitgeist. This is forced on us by SF city codes and regulations.

The SF Department of Public Health has been making efforts recently to reign in unlicensed food vendors, which may have sparked the Zeitgeist reaction — although the origins of the Zeitgeist decision remain hazy.

(“Good,” many of my homo homies responded re: the Zeitgeist ban. “She’ll make it to the Eagle earlier on Sundays now.” The Eagle will be celebrating the Tamale Lady’s birthday on Fr/21 with bands all evening.)

Luckily for Ms. Hot Tamale — and us drunk patrons — political help, and a viable option to continue, may be on the way.

“The Tamale Lady is not going down,” vows Mission supe David Campos. “We’re working hard right now to find options to make sure she stays in business.”

He’s been in contact with SFDPH director Barbara Garcia to see what the city can do.

“There’s kind of a dead zone when it comes to smalltime street food vendors and pop-ups, unlike with food trucks and and brick-and-mortar restaurants,” Campos rep Nate Allbee, who’s helping with the effort to save the Tamale Lady, told me.

“Take, for instance, the bacon-wrapped hot dog vendors outside nightclubs — obviously people like them, which is why they’re there. And they’re such small fry that no one really bothers to apply whatever regulations they could to them. The city turns a blind eye. It’s the same with the Tamale Lady. We want to craft legislation that will make it clearer how to protect these vendors while assuring the public.”

Campos and his people have also been in touch with La Cocina, the Mission food start-up incubator that specializes in helping women launch their own businesses. “They’ve said they’re very willing to fast-track the Tamale Lady into a program that would give her access to their commercial kitchen, which would bring her up to code and allow her to still sell,” Allbee told me.

Campos & co. are reaching out to Ramos right now; hopefully a solution will be right around the corner — and a veggie tamale will be all up in our drunk-ass mouf.

PS: Here is the Save the Tamale Lady! petition