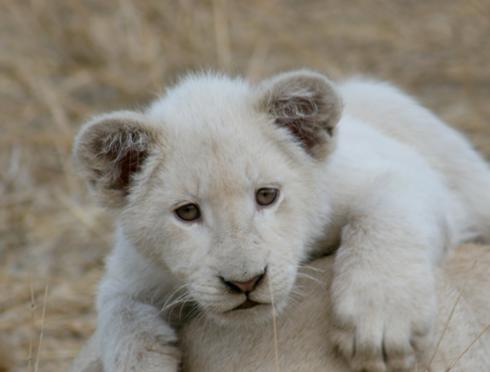 WE DO NOT EAT THE KITTIES. I mean, some people do/would be excited to do so, given the meat-lust stirred up by the recent appearance of lion meat skewers on the menu at a Burlingame restaurant. But not us, not meow, not ever.

Let’s instead focus on the arrival in the Bay Area of a woman famed for her work rescuing the technically-extinct white lion. Linda Tucker, take the bad taste out of our bewhiskered mouths, will you?

Tucker’s in town to read to us from her new journal Saving the White Lions: One Woman’s Battle for Africa’s Most Sacred Animal, which is a rundown of her efforts to preseve the white cats for future generations. The quest led her to start the Global White Lion Protection Trust, and she’ll be appearing today Mon/10 at Modern Times Bookstore Collective, and on Wed/12 at Book Passage in the Ferry Building to talk about her organization’s crusade.

The white lion is a relatively recent discovery in the Western world — Europeans didn’t first spot them until the early 1940s in the Greater Timbavati and southern Kruger Park region of South Africa. The white people promptly started hunting the white kitties, breeding babies for eventual slaughter as trophies, and installing them in zoos far afield from the Savannahs where they like to stay. The last white lion in the wild was seen in 1994.

Tucker’s organization is attempting to establish the white lion genotype as a subspecies of Pantera leo, which would allow the cats to be officially classified as endangered and help stop hunting in their geographic area and the sale of their body parts, as well as those captive breeding practices which stress their gene pool. The group also works on re-introducing the cats into the wild — which Tucker says it’s successfully accomplished for three prides.

The Global White Lion Protection Trust also recently saved the life of Nyanga, a white lioness whose cage was left open at the Johannesburg Zoo the day she killed a worker there. She’s since been relocated to a wildlife sanctuary, where the stresses of zoo life won’t kill anyone else. (RIP Tatiana, we miss you girl.)

Of course, Tucker is not the only hero here. Consider her website’s description of Marah, the lioness who started it all:

her name means ‘mother of Rah, the sungod”, she formidably shattered all misperceptions about white lions not being able to hunt and survive in the wild — she successfully raised her cubs (Zihra, Letaba and Regeus) to adulthood under free-roaming conditions and taught them to hunt self-sufficiently. Her hunting success rate was comparable to the wild-born tawny lionesses that were observed in the same environment, under the exact same conditions.